The Technology That Sinks Its Teeth into Mammal Fossils

At the University of Wyoming Geological Museum in Laramie, there’s a collection of fossilized mammal teeth that gives paleontologists a lot to chew on – and some pretty cool technology that lets them do so. It’s no secret that Wyoming has some of the richest fossil deposits in the United States. Many people’s minds go straight to the big dinosaurs that have been uncovered in the vast western state, but the land is also rich in mammal fossils from the Paleocene, Eocene, and Oligocene epochs. And where there are mammal fossils, there are teeth.

According to Dr. Laura Vietti, University of Wyoming Geological Museum and collections manager, of the roughly 45,000 fossil vertebrate specimens in the museum’s collection, anywhere from 75–85 percent are mammal teeth. Part of that is because teeth have a much higher chance than bone of being preserved.

“We're so fortunate that teeth have the highest preservation potential because teeth are, in my opinion, paleontologic gold,” said Vietti. “If you're going to preserve one thing, teeth are the one.”

There is a lot to be learned about an animal from its tiny tooth. For starters, unlike a rib bone, for example, which looks pretty similar among different mammals, a tooth can actually identify the creature down to its genus and species. It can tell you how big the animal was and what kind of food it ate. When scientists examine the microscratches on the tooth, they may even be able to figure out what the animal’s last meal was. And when scientists get really into the nitty-gritty, they can grind up a part of the tooth and examine its isotopes to learn how an animal fit into the food web or even how much ice was present on earth at the time.

All of that from a teeny, tiny, mammal tooth.

But if these teeth are so tiny, how on earth does anyone find them? As with any good treasure hunt, it starts with knowing where to look. Paleontologists usually know where to find fossils big and small thanks to geologic maps that outline the age of rock in a given area. The conditions have to be right, too, meaning that the rock is depositional in nature. In other words, the rock represents what used to be something like a flowing river, where bones would have been naturally deposited and buried when an animal died.

When looking for relatively larger teeth roughly the size of a fingernail, Vietti said, she starts by looking for fossil bones. Most fossil bones that are found are just small chunks, but that’s a good indicator that there may be teeth nearby, which can more clearly identify the mammal. It also helps that a lot of mammal teeth in Wyoming, according to Vietti, look distinctive. They’re usually black and shiny and have a noticeable shape, and sometimes they’re found in a jaw bone in a group. 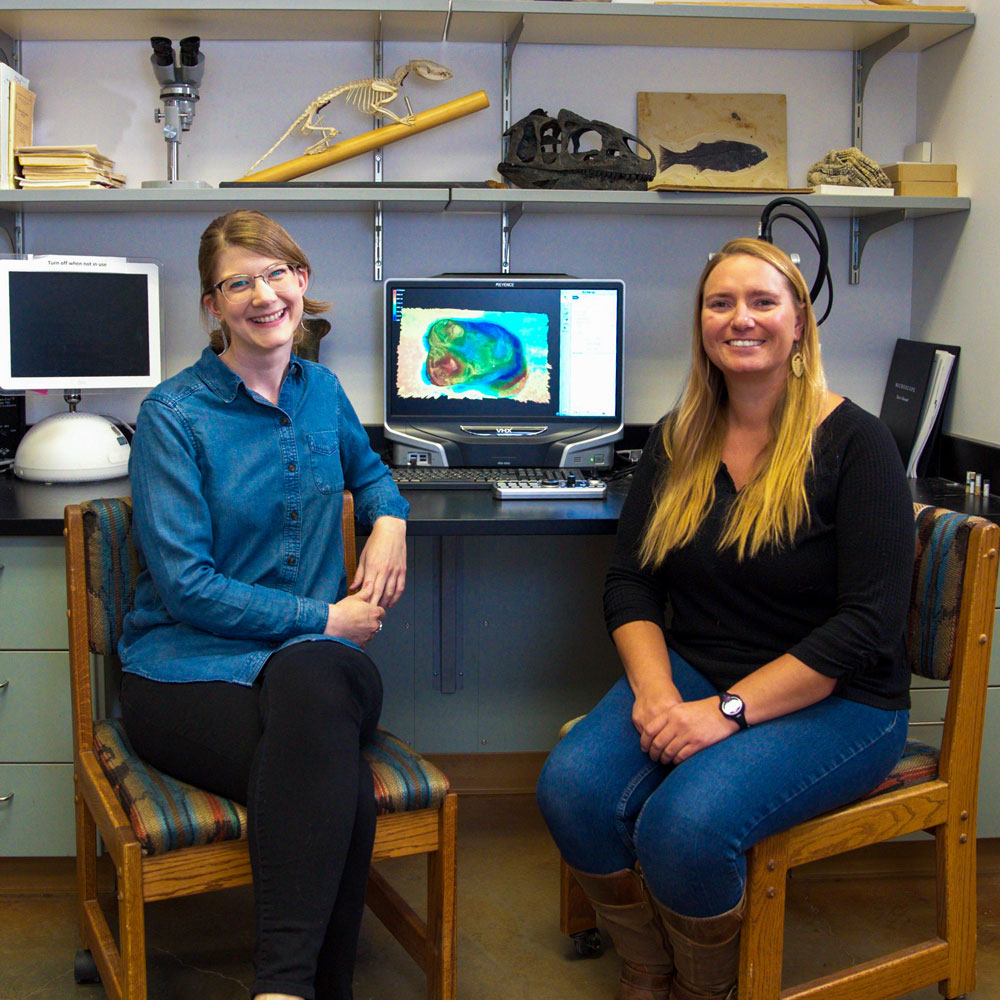 But then there are the mammal teeth that are so small that it’s like looking for a needle in a haystack, except the needle is smaller and the haystack is a bunch of dirt.

In the collections at the University of Wyoming Geological Museum, “We have about 20,000 teeth that are about the size of the head of a pin,” said Vietti. “You can find those teeth with the naked eye. But you have to be on your hands and knees, nose to the ground, looking. And you have a really low potential of finding them because they're so small.”

Oftentimes, paleontologists will go to a specific part of a river where heavier sediment settles, or to the edge of a lake. They’ll take gallons upon gallons of the deposit, run it through a sieve, and use a microscope to pick through the material.

“Per 5-gallon bucket, you might get three teeth,” Vietti said. “So it takes a lot of effort to find three teeth, but it's doable and it works.”

As a fun side story, in the 1800s, early paleontologists used ant piles to find tiny, fossil mammal teeth, since ants pick out a certain size of rock to build their hills. The early fossil hunters noticed that there were mammal teeth from the time of the dinosaurs in the ant hills.

“And then they would transport these ants, and they would take them to another fossil site and leave them there for a year and come back and see if there were any mammal teeth,” Vietti said, while acknowledging this method isn’t very practical today. 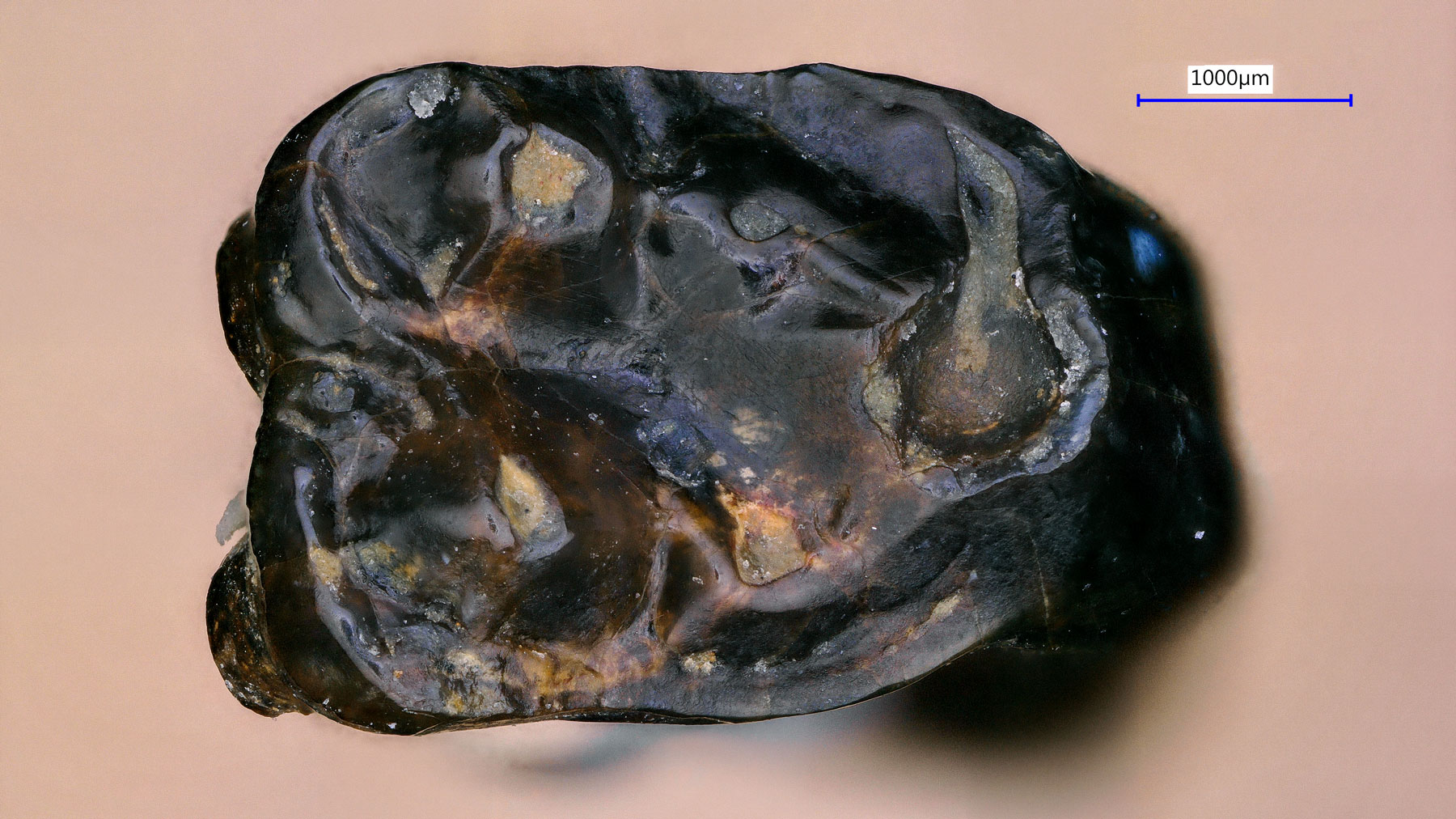 OK, so now that there’s a tiny tooth, it’s time to look at it. But it’s hard to examine or take a picture of something so small. The more you zoom in on a microscope, the less of the tooth’s surface is in focus. But thanks to a technological process called focal stacking, there’s a tool that creates an image of a mammal tooth out of a bunch of tiny, in-focus images.

It works like this: Vietti uses a digitization imaging station to capture an image of a spot on the lowest point of the tooth – think of the shape of the tooth as a tiny mountain – at 200x magnification. Then the instrument moves over a microscopic amount, refocuses, and takes another image. Repeat that process a whole bunch all the way up the tooth, then combine all the images into one larger image, and voila, the museum has a photo of a very petite tooth.

Though Vietti said focal stacking is not the newest or best technology (there is technology that allows for a micro-CT scan of a tooth), it makes a process that used to take a full day or even two take just 10 minutes.

“It gives you the ability to image a whole bunch of teeth. So for the first time ever we can create a collection-scale database of tiny teeth images,” she said.

That’s important not just for the scientists who study mammal teeth, but for the public, Vietti added. She noted that most of the fossils in their collection come from Bureau of Land Management (BLM) land, which is public land managed by the federal government.

“Digitizing the [BLM] specimens is one way to digitally open our collection stores and to get the specimens out to as many people as possible,” Vietti said, “because, at least in the United States, everybody owns them.”