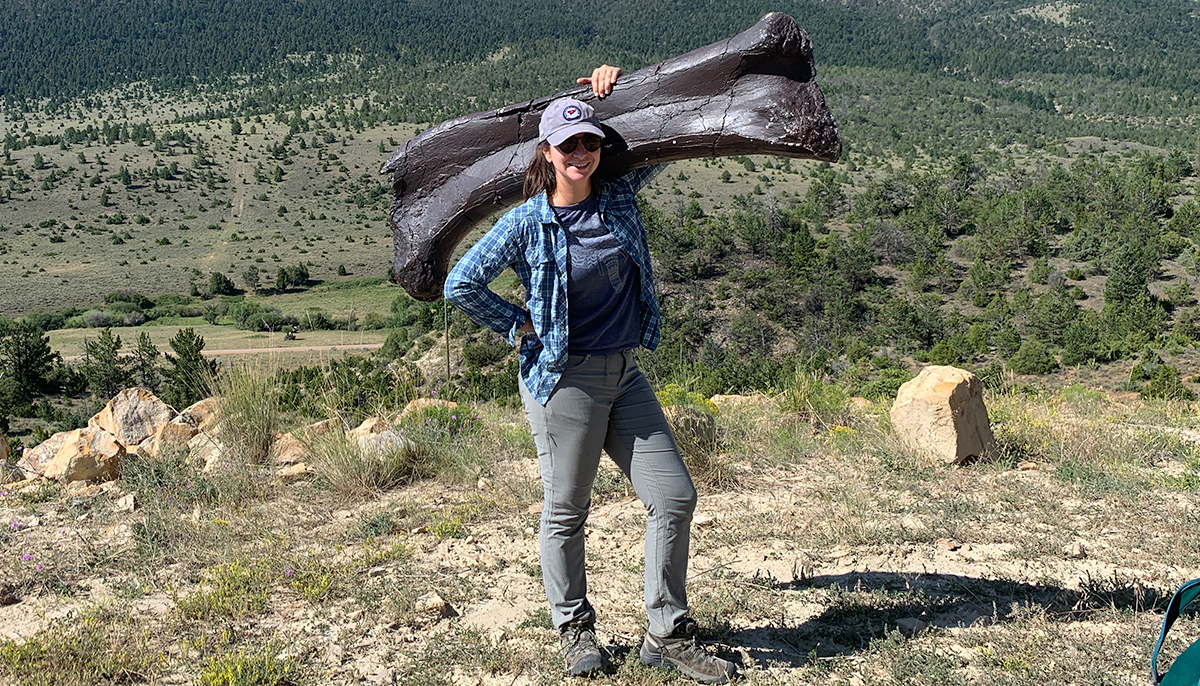 Prehistoric Road Trip was filmed in the summer of 2019 on three separate trips. Emily Graslie and crew traveled across five states to film the show over the course of nine weeks. Emily, along with the show’s director and producer, Ally Gimbel, made note of their journey in a travel journal. See Emily’s travel journal here.

What It Took to Plan the Show

Planning this road trip from a film production standpoint was no easy feat. First of all, we had three episodes to shoot and only one summer to fit it all in! Why summer, you may ask? That’s the time that most research scientists are out conducting their fieldwork in this part of the country while academic institutions are on holiday. Also, you need good weather to conduct fossil digs, and these localities are available only for a few months of the year (in other words, not buried in snow). 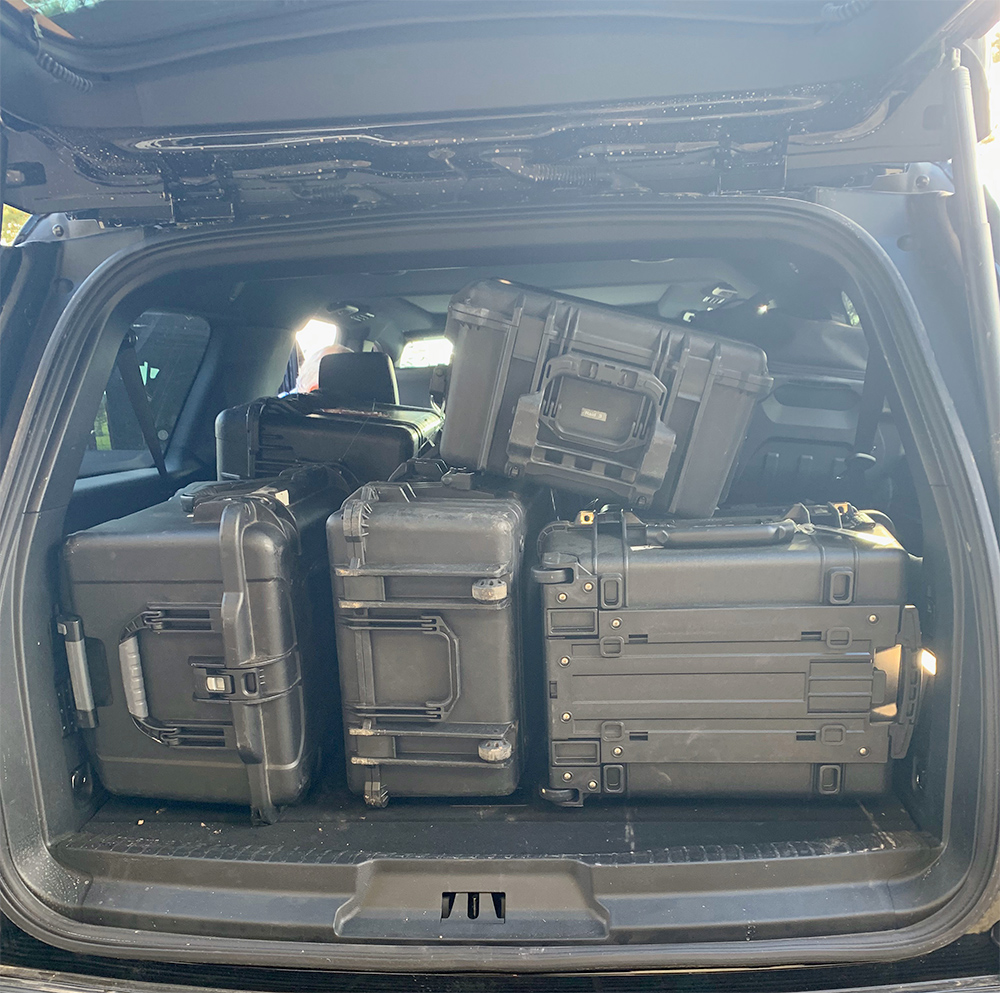 At every new location, the crew had to pack and unpack a lot of equipment. Photo: Ally Gimbel

We had to meticulously plan every detail for every location we wanted to visit. On any given day, we were coordinating between no fewer than 40 individual museums, scientists, landowners, and local, state, federal, and tribal agencies to obtain permits to film at each site. We needed to obtain proper permits, schedule the date and time of our arrival (with a contingency plan for rain), and in many cases where there wasn’t a paved road, figure out how we’d actually be able to access the site itself.

This took months of planning during the winter of 2019. Emily and I spent pretty much all our time in a windowless room in the Field Museum, next door to her Brain Scoop studio, filling out forms, emailing and calling all the places and people we wanted to film with. We had this massive spreadsheet tracking all the scientists’ availability, cross-referenced with their research localities. Then we pinned road maps to the walls so that we could see whether our shoot schedules would even be feasible logistically and geographically. We knew that we couldn’t film a Triceratops dig in central Montana on Monday and then be at a museum in southeastern Wyoming on a Tuesday! We couldn’t film with paleontologist A in June because she’d be at a conference, but paleontologist B would be at his site near A’s only during the first week of July…It was one, giant, logic puzzle!

Then there were all our travel logistics, such as booking flights and hotels for the seven-person crew. For the locations where we had to camp, I contracted an amazing Laramie, Wyoming-based outfitter to provide comfortable tents and food. Rebecca and her intrepid team hooked us up with extra-cozy sleeping pads, pillows, campfire-cooked brownies, and even set up an outdoor toilet for us “city folk” who were unaccustomed to really roughing it. It was basically a pop-up tent with a bucket inside (and did not last long in the windy Bighorn Basin), but it’s the effort that counts! Eventually, we all just got used to going au naturel over “potty hill.”

Our crew travelled throughout the summer in four vehicles: two large SUVs (one carrying most of our camera equipment, the other containing all of our luggage), a cargo van (for all the lighting and grip equipment), and a regular-sized car that we could use for filming Emily drive. Just keeping track of all the stuff (not to mention all the car keys) was a job unto itself.

With the exception of eight nights in Baker, Montana, we were moving from one location to the next nearly every day. This meant constantly unpacking and repacking not only our personal belongings, but also all of our equipment. Every. Single. Day. I’m amazed that we didn’t damage, lose, or break more gear. And that our crew didn’t mutiny by the end of the summer. 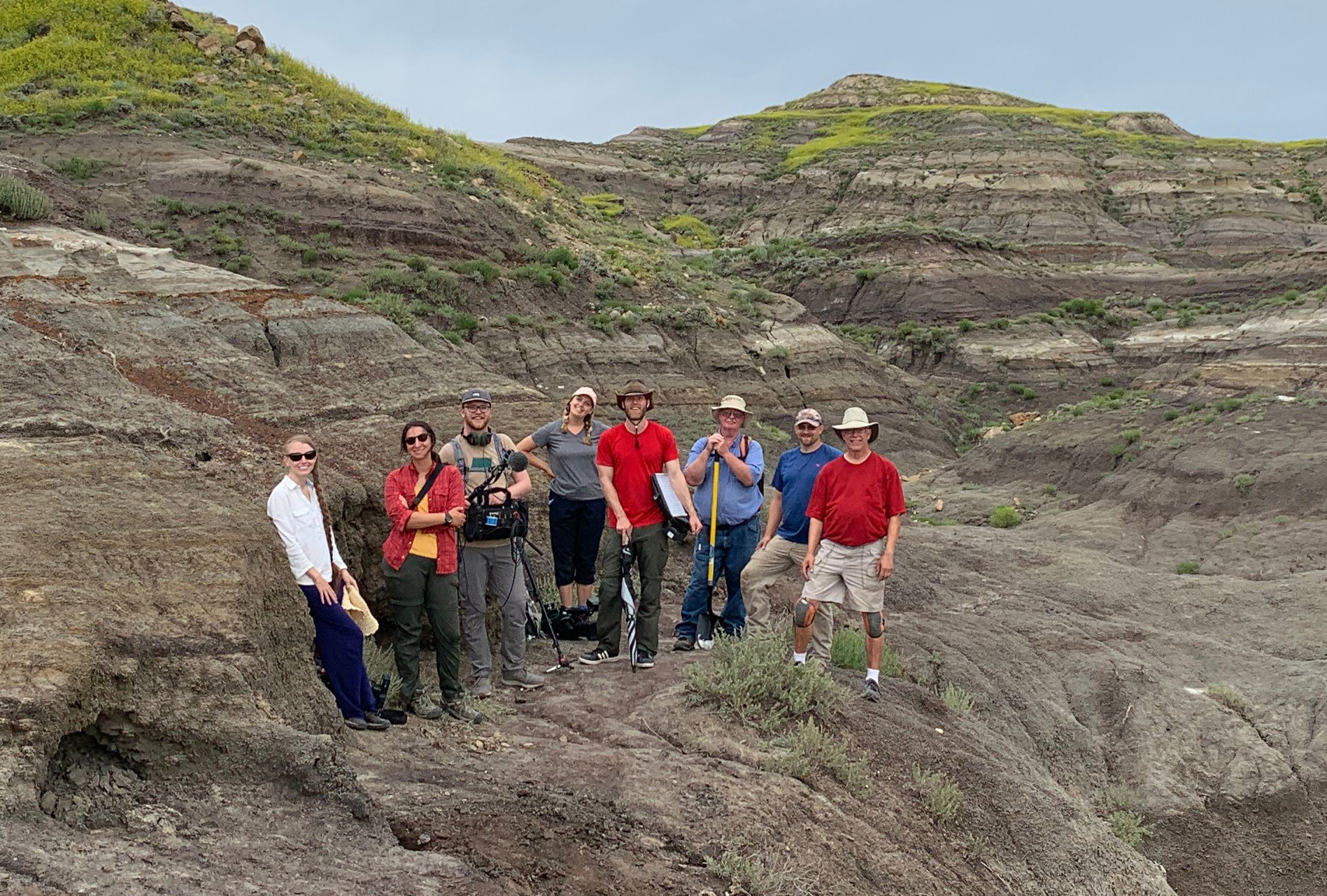 Speaking of the crew, aside from Emily and me, we had our camera team of Tim and Julie, audio recordist Anthony, grip/gaffer Jason, and production assistant Raven. We were pretty much one, big, dysfunctional family caravanning across the country, spending nearly every waking hour together for nine weeks. The days were long, and the work was physically exhausting, but everyone brought their A-game. 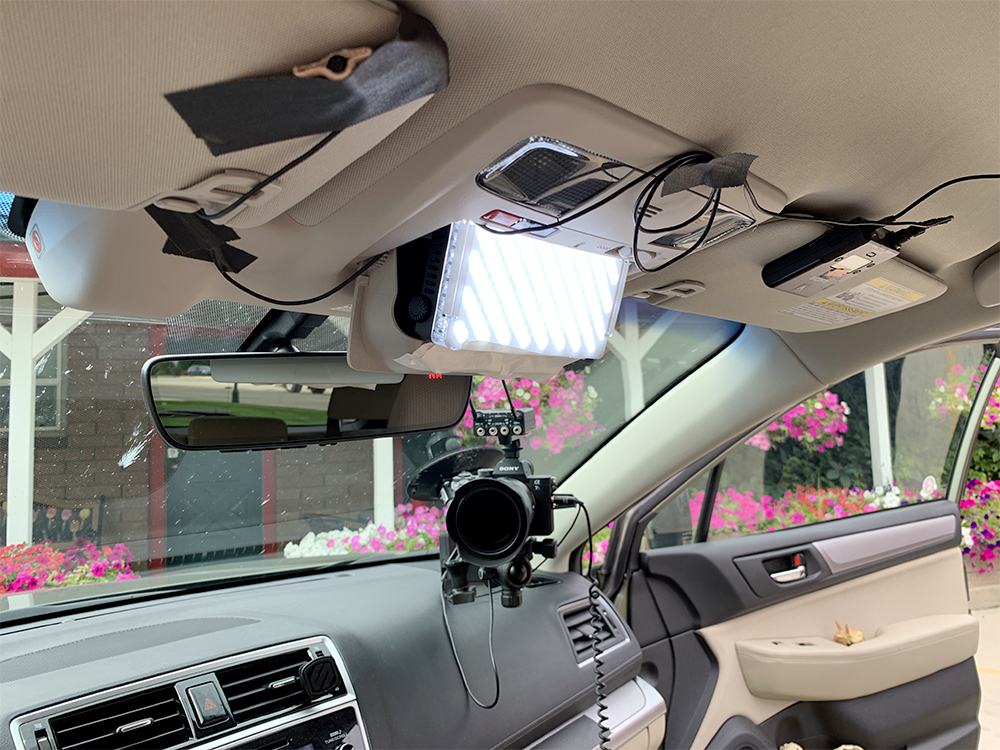 It took a lot of work to rig up the “camera car” while filming Prehistoric Road Trip Photo: Emily Graslie

Anthony would capture clear audio even when the wind was whipping 40 mph. Julie scrambled up steep, brittle buttes with a giant camera slung over her shoulder and a smile on her face. Tim expertly rigged out our “camera car” and cheerfully captured spectacular drone footage.

Tim even taught Emily’s dad how to fly the drone while we were out on the Graslie family ranch! Jason wouldn’t flinch when asked to lug massive lights through the Badlands or hold a diffuser above his head for half an hour in the blistering heat. And Raven was brilliant at making sure that whatever any of us needed – whether it was sunscreen, water, extra batteries, photo releases, or (most importantly) snacks – all we had to do was ask her to dip into her repurposed diaper bag/field backpack and it would instantly appear. 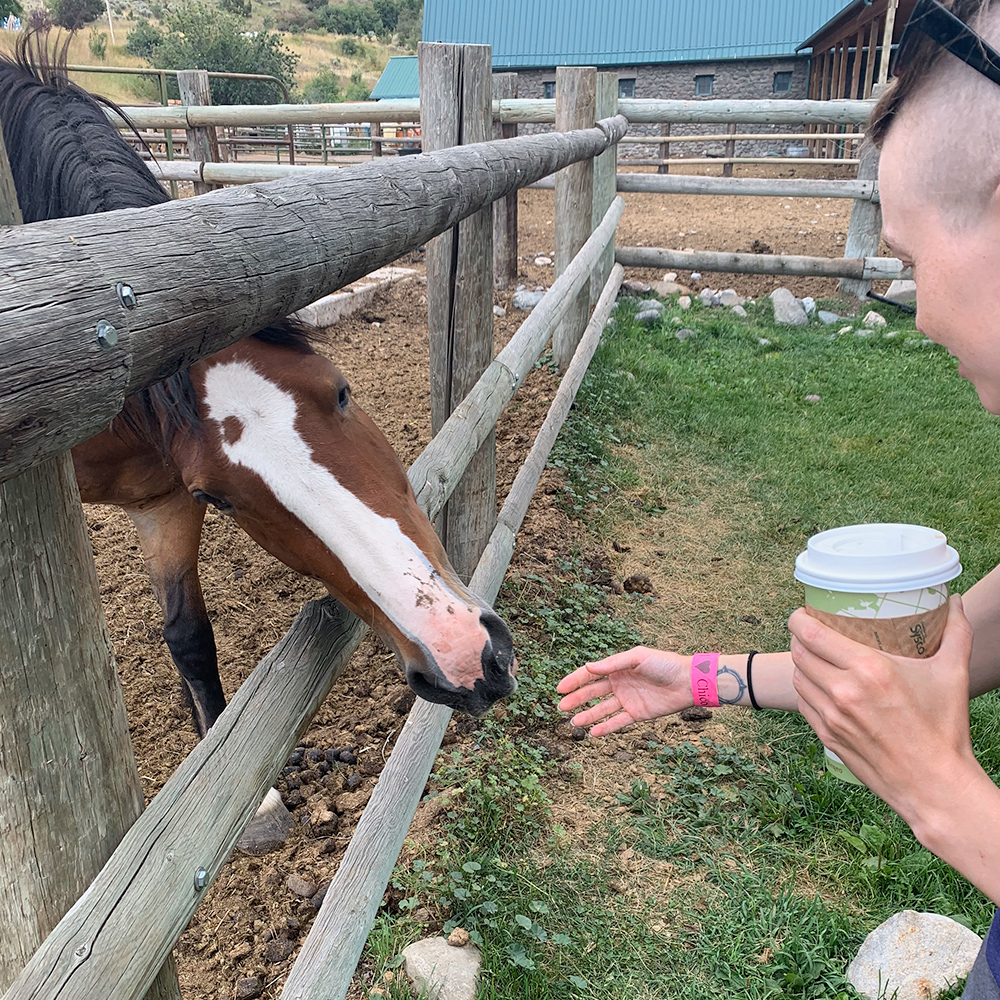 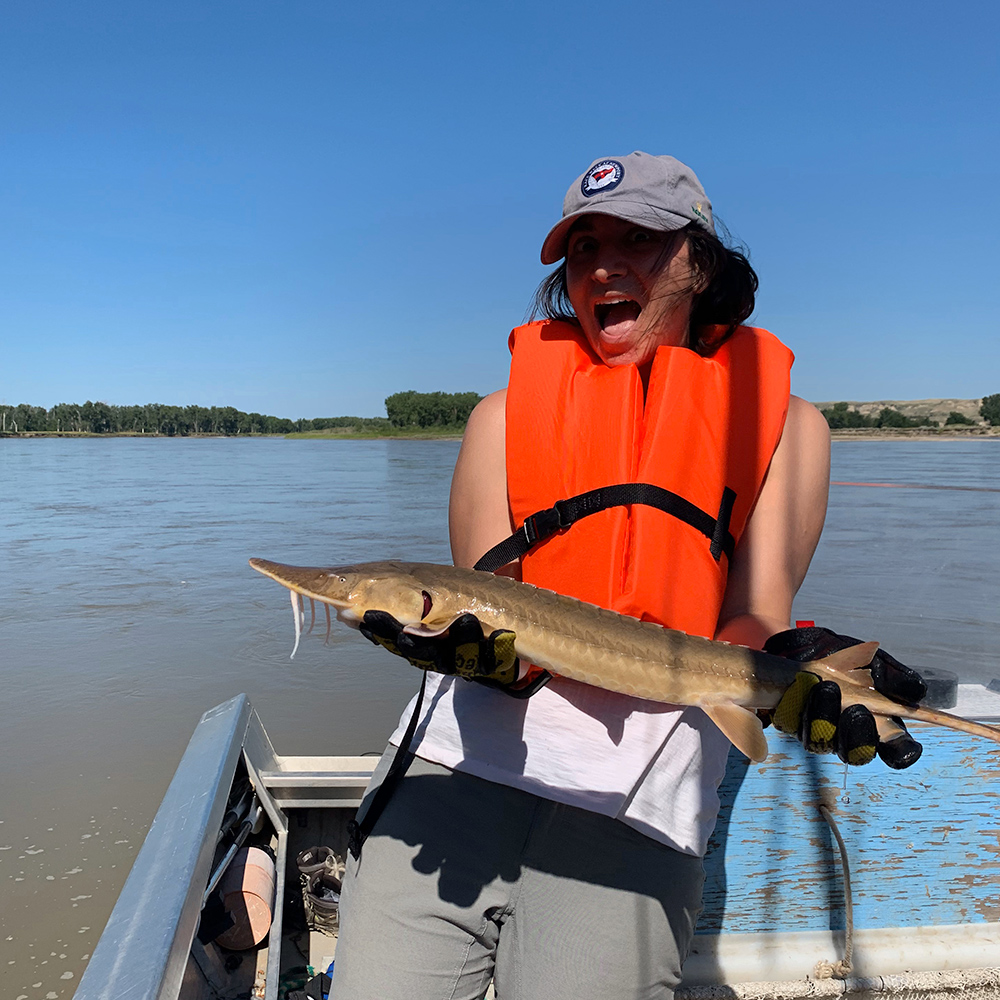 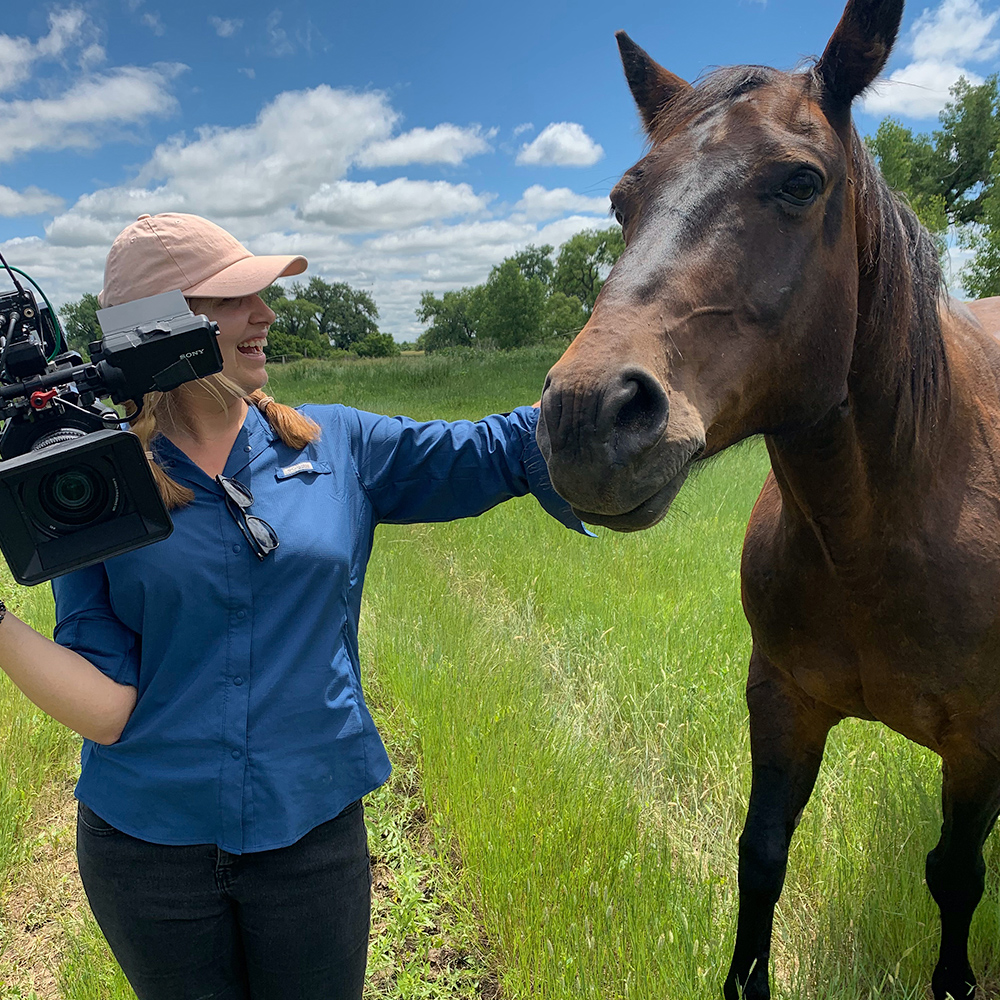 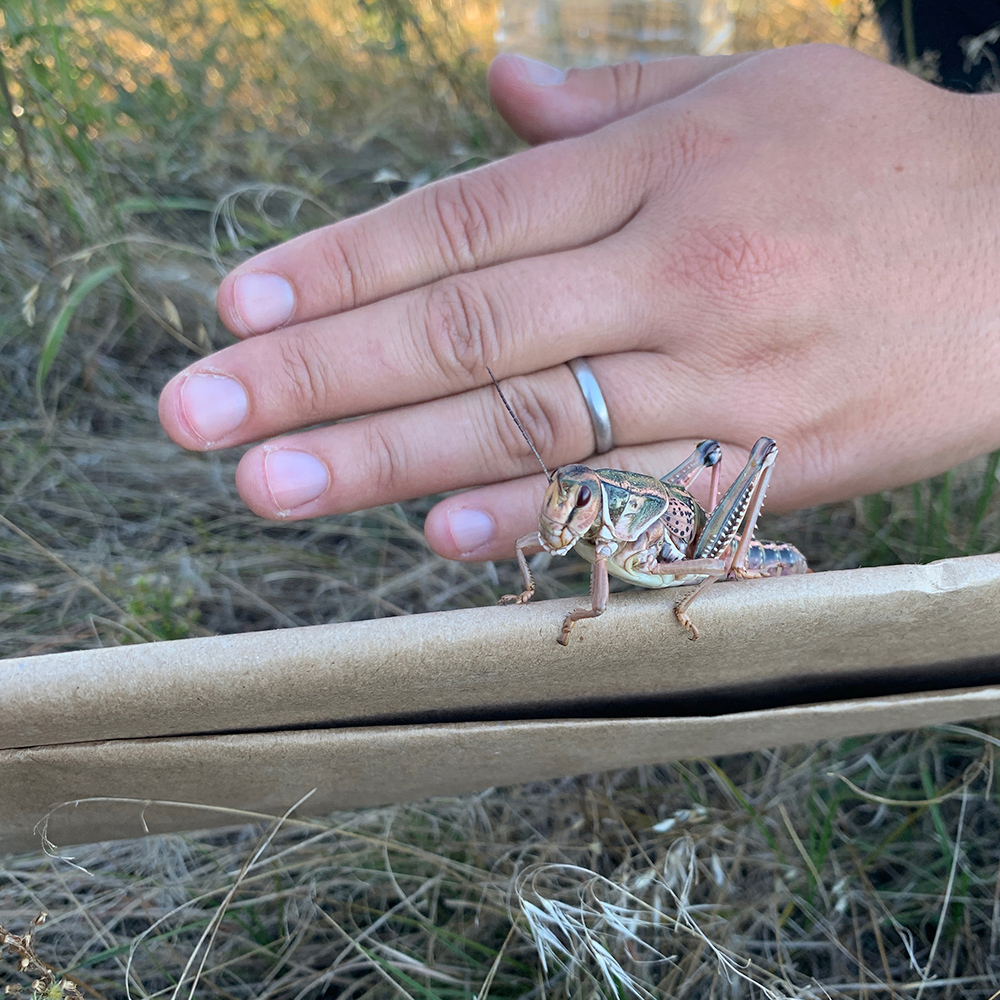 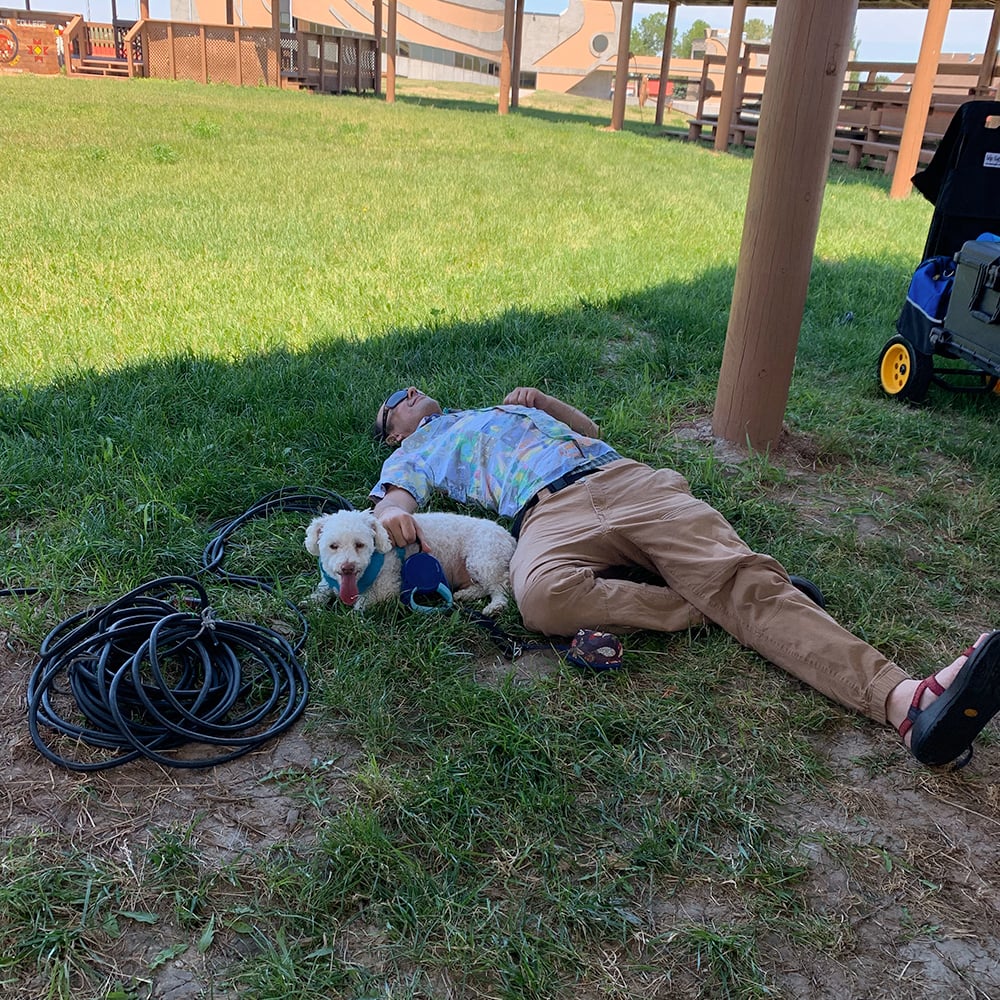 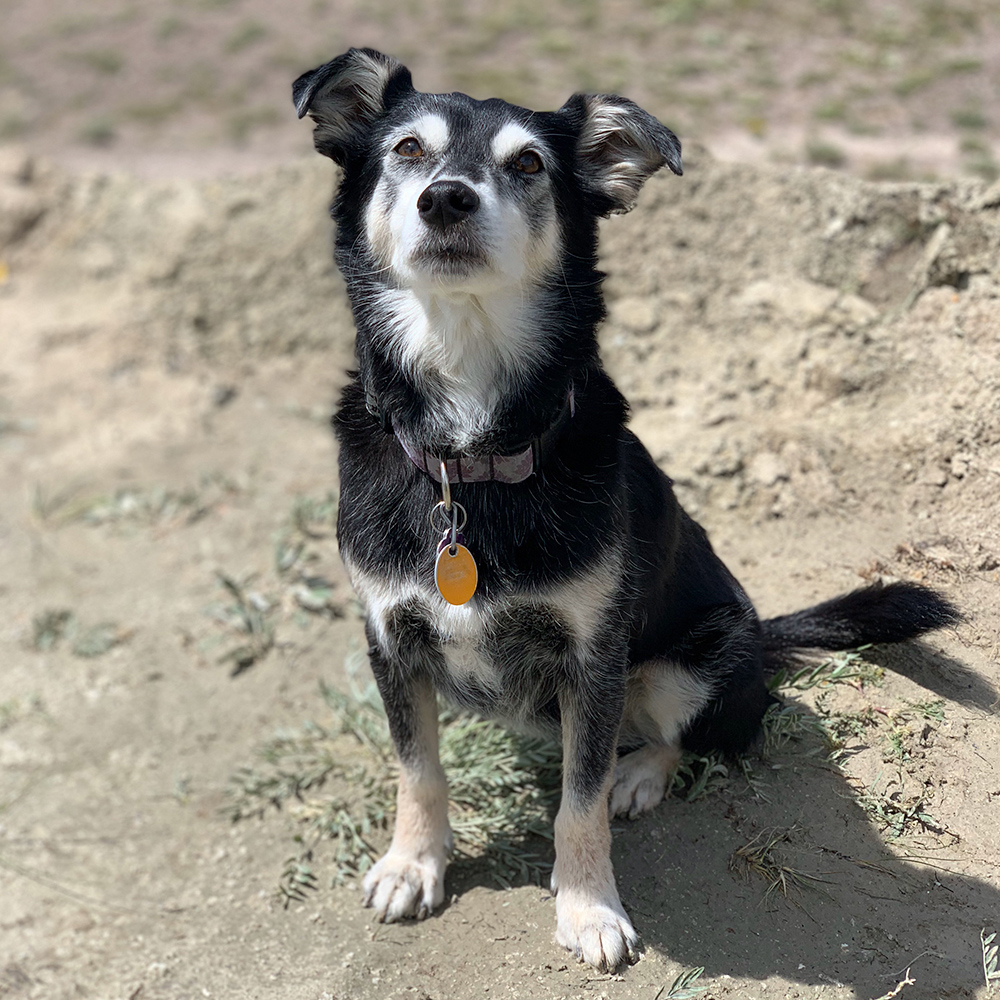 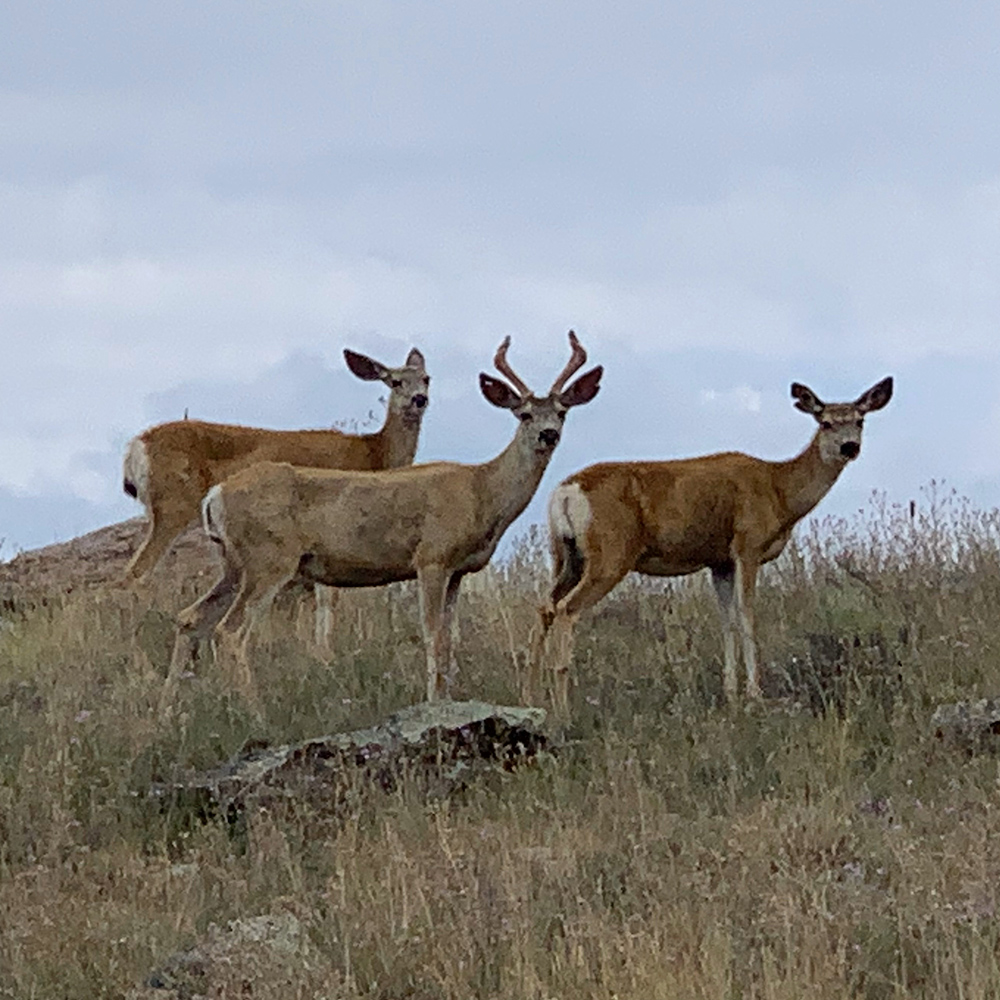 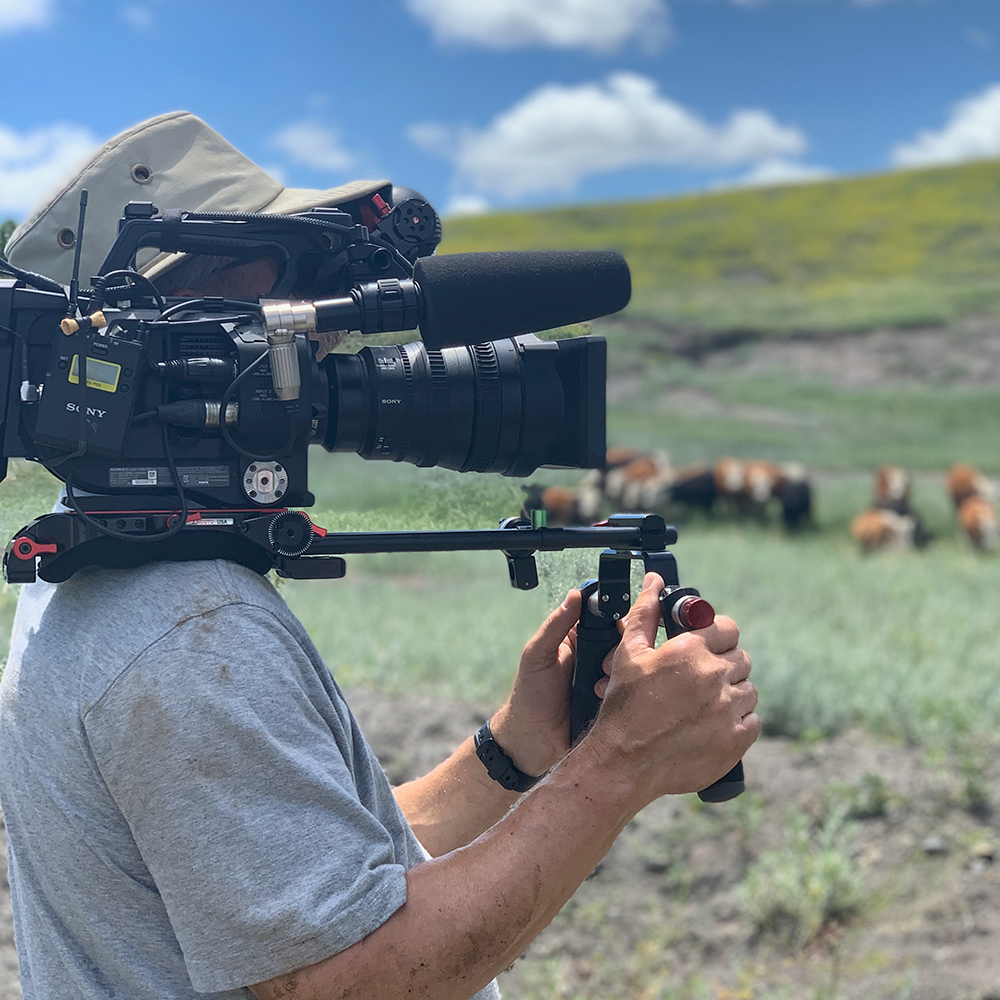 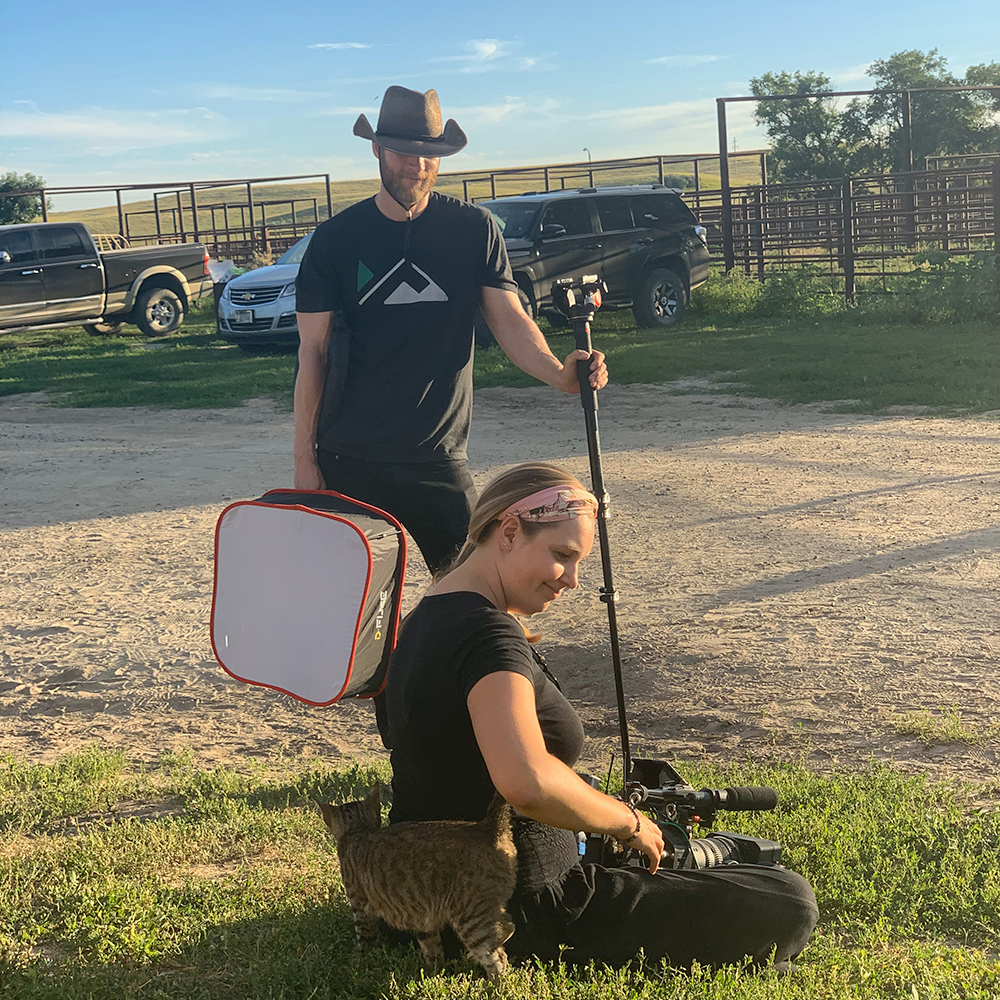 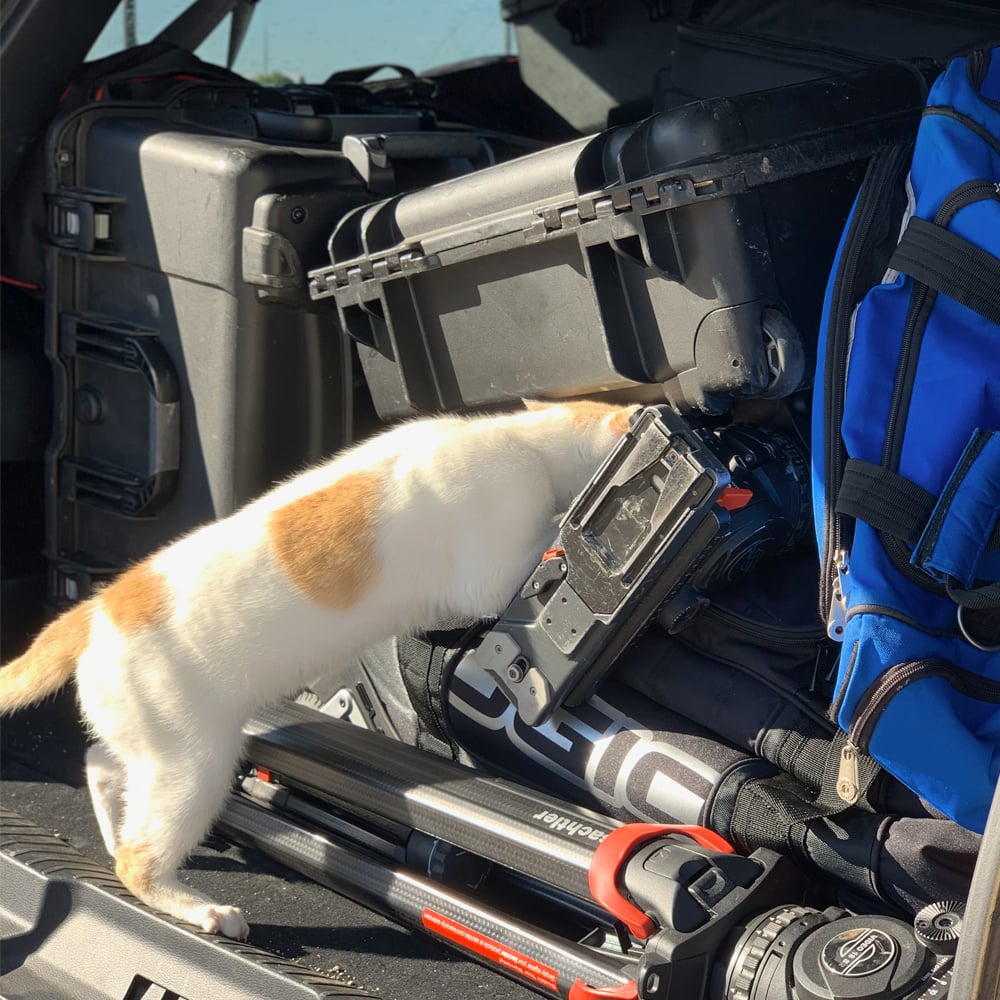 Even though we were making a TV show pretty much about extinct animals and the environments they lived in, we still encountered plenty of creatures and critters while on the road. It was always a huge morale boost when we showed up at a dig site and someone had brought along their dog, or when a feral cat attempted to stowaway in our gear truck. (Read Emily’s journal for more on Fred the Cat)

We met some friendly (and very curious) horses and cattle while filming on a ranch outside Hermosa, South Dakota. At the site of the former Fossil Cycad National Monument, we encountered the largest grasshopper I have ever seen, just living its best life out in a prairie. It was the length of my finger! I particularly enjoyed the day we spent on the Yellowstone River with the crew from Montana Fish, Wildlife and Parks, filming a segment about the endangered pallid sturgeon, as it meant I could get my hands dirty helping the fisheries team sort through all the swimmers we caught in the gill net. 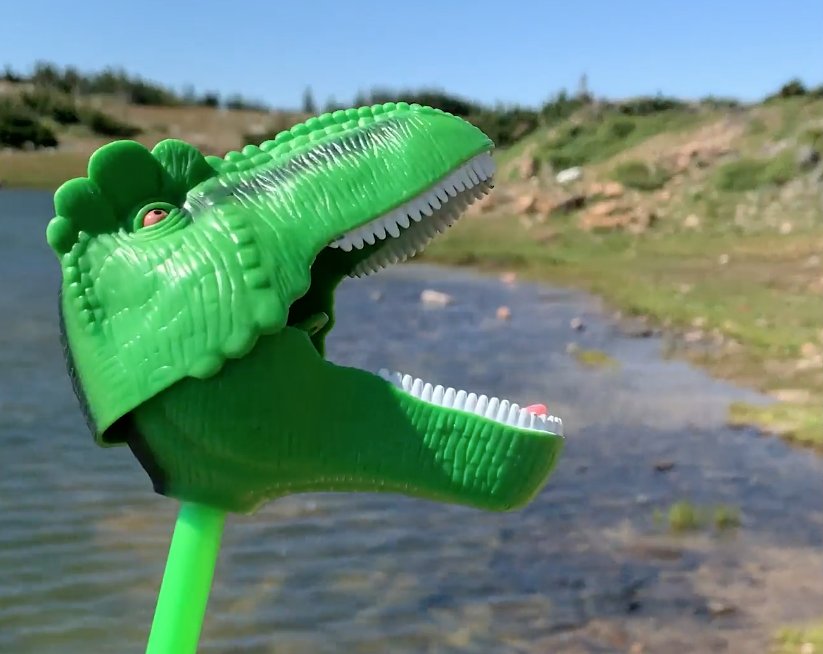 The Tate Geological Museum at Casper College in Casper, Wyoming was one of the first museums we filmed in that had a gift shop, and after more than a week of working 24/7, most of us were pretty eager to spend some hard-earned cash. Our camerawoman, Julie, picked up a plastic, jaw-snapping T. rex that our crew affectionately nicknamed “Bongo” (I don’t know why). Someone had the ingenious idea that Bongo could replace the industry-standard clapboard that we had been using for marking the sync point on all our cameras. It didn’t really work, but Bongo traveled everywhere with us, and I think Emily still keeps him as a memento in her office.