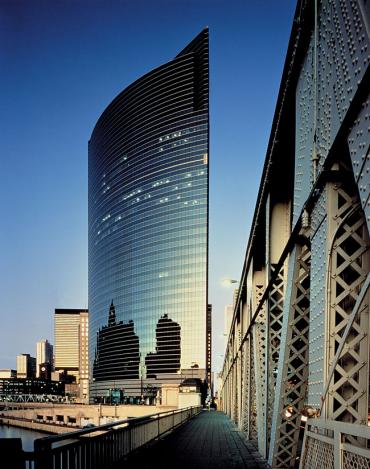 Since its completion in 1983, one of Chicago’s most beloved skyscrapers, 333 Wacker Drive, has graced the bend in the Chicago River at Franklin and West Wacker Drive. Designed by the New York-based architecture firm Kohn Pedersen Fox, the high-rise has a kind of dual identity – the north-facing side echoes the turn of the river with its green-windowed, curvilinear façade, while its street side pays homage to the grid system of Chicago.

Architecture critic Blair Kamin called 333 “a renowned example of architecture that simultaneously draws inspiration from its surroundings and upgrades them.” 333 is like the grandest of all mirrors, at once reflecting the river, the clouds, and all the beauty of Chicago’s built environment.

333 appeared in the 1986 film Ferris Bueller’s Day Off as the office building where Ferris’s father works.