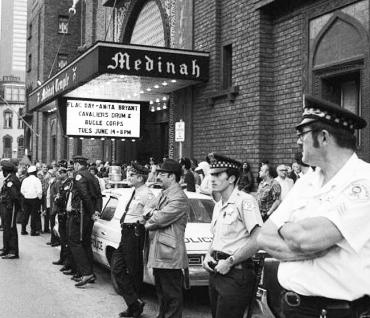 In 1977, the nation saw Anita Bryant – the seemingly good-natured woman who tried to sell them orange juice in Tropicana commercials – initiate a hostile “anti-homosexual” media campaign across the country. Bryant was outraged at a Dade County, Florida decision to protect sexual orientation as a civil right and vowed to aggressively pursue its repeal. She took to the airwaves with her newly founded Save Our Children organization, a coalition devoted to repealing the act that banned housing and employment discrimination based on sexual orientation. The coalition’s efforts were successful, and on June 7, Miami area voters took a step backward, reversing the decision.

A week later, Bryant landed in Chicago to perform at an event for Shriners Children’s Hospital. What transpired that day was an important moment for Chicago’s LGBT community – 5,000 individuals showed up at Medinah Temple to picket the event. The expression of solidarity inspired more and more Chicagoans to rally around the issue of gay rights and the next year’s PRIDE Parade saw a dramatic surge in attendance. Bryant’s views may have only succeeded in strengthening Chicago’s LGBT community by giving greater visibility to the discrimination and injustices they faced.