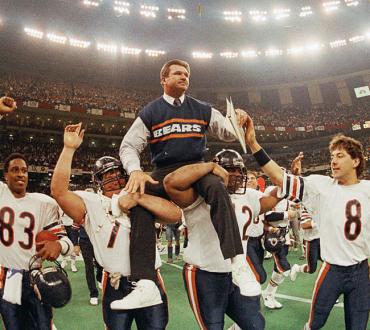 If you were around in 1985, chances are you were glued to your television set during the Bears near-perfect championship season. And if the game itself didn’t draw you in, there were plenty of other reasons to love the Bears. A little ditty called “The Super Bowl Shuffle” featured Chicago’s favorite cast of characters: the appropriately nicknamed defensive tackle, William “The Refrigerator” Perry; the “Punky QB” Jim McMahon; and everybody’s favorite running back, “Sweetness” Walter Payton. The team was so dead-set on winning the Super Bowl, they recorded “The Super Bowl Shuffle” the day after their only loss of the season.

“There are teams that are fair-haired, and those that aren't so fair-haired. Some teams are named Smith, some Grabowski. We’re Grabowskis.”

And how about those headbands? Or loving anything and everything that came out of Coach Mike Ditka’s mouth? Ditka’s no-nonsense straight talk had immense appeal for the local and national media. But it wasn’t good for the entertainment value alone – he was motivating and persuasive at the same time. As Ditka would say, “Before you can win, you have to believe that you are worthy.” Prove their worthiness they did, when the Bears creamed the New England Patriots in Super Bowl XX with a final score of 46-10, the largest margin of victory in Super Bowl history up until that time.