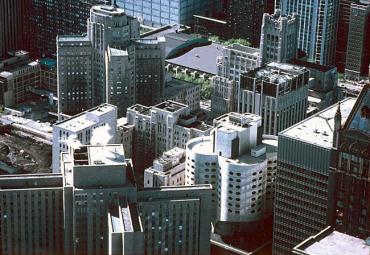 Bertrand Goldberg had thrilled the city and transformed both the skyline and the riverfront with his Marina City Complex in the mid-1960s. The twin round towers broke the box, so to speak, of hard-edged 90-degree modernist architecture that had become the standard solution to building tall in Chicago. Its floors were poured concrete, it had a corncob-like exterior, and was ringed by balconies. With its riverfront marina and promise of a movie theatre, it screamed cool.

The Goldberg-designed Prentice Women’s Hospital, completed in 1975 for Northwestern Memorial Hospital, is a great example of the architect’s unique approach to health care facilities. The upper floors at Prentice are a poured concrete structure that cantilevers over a glass box base. It has four, round, tower-like wings coming off a central core, suggesting either a four-leaf clover or a flower. The design allowed easier access to delivery and recovery rooms for the nursing staff. Prentice is an architectural standout in Streeterville, surrounded by a combination of modern and post-modern structures from the ’20s and ’30s.

Goldberg continued to excite fans of architecture as well as those just interested in adventurous solutions to urban living in the ’80s with his plans for River City. Goldberg had visions of a complex of buildings, some of which curved like snakes, some of which were triangular, promising a city-within-a-city that was aesthetically coherent and diverse enough to feel organic. The River City project also suggested the world south of the Loop could be a great place to live, offering the hope of a repopulated city center. When the project finally found approval and funding, it was a shadow of Goldberg’s original vision, but the design was still successful in the eyes of Chicagoans.