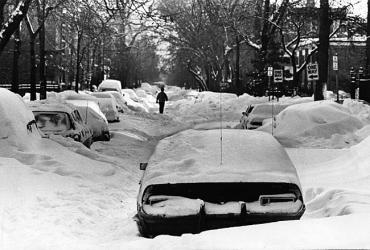 A good Chicago winter storm leaves marvelous imprints on memory. The Blizzard of 1979 was no exception to Chicago’s tendency to be walloped in white every decade or so and to be rewarded with tales, some tall, some small, a few true. It snowed for nearly three days starting late on January 12. Almost two feet of snow fell, added to the more than half-a-foot left over from a snowfall on New Year’s Eve, and the temperature was dropping. On January 13, those shops foolhardy enough to open soon closed, and sent employees out into the wind and snow to head for home. Some of them didn’t arrive back in their living rooms for hours, as train lines were snowbound, roads impassable, busses stalled. Many walked miles past the point where nothing could roll but plows. It stopped the city in its tracks, leaving mountains of snow the size of apartment buildings and giving the place a feel of being under siege. It also cost the mayor his job. While the streets were fit only for plows, the plows didn’t come. Democratic candidate for mayor, Jane Byrne, started talking to reporters and TV crews in front of unplowed streets, asking how Mayor Michael Bilandic could fail to do this basic part of his job. The message stuck, and Byrne was able to use the impact of the frozen mess to build a larger picture of Bilandic’s City Hall as another kind of mess. In spring, she became the city’s first female mayor.