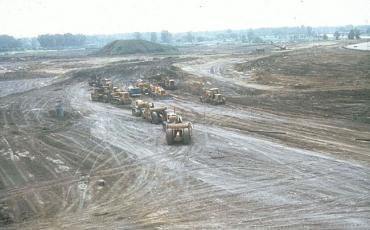 The world was created in seven days, or so some people believe. But it took the Chicago Botanic Garden seven years to create paradise. In 1965, workers broke ground in the flooded marsh of Glencoe. In the beginning, the landscape was mostly waterlogged, untamed woodlands, lakes, and a rogue arm of the Chicago River.

The Chicago Horticultural Society had a vision to create a nature sanctuary committed to scientific research, innovation, conservation, and education. Landscape architect John O. Simonds saw potential in the marsh and, with Geoffrey Rausch, conceived a plan to mold the land into island gardens and a series of lakes. The Chicago Botanic Garden opened its gates to the public in 1972, and guests enjoyed the first of what would be many elegantly winding, emerald gardens.