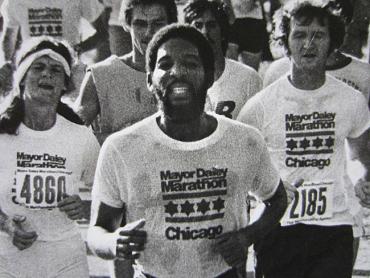 At 8 a.m. on the morning of September 25, 1977, Chicago saw 4,214 runners take their first strides of the 26.2 miles they would cover that day. The former First Lady of Chicago, Eleanor Daley, urged the runners on their way while the Marist High School band played. Dubbed the Mayor Daley Marathon after the passing of Richard J. Daley, the race was renamed the Chicago Marathon a year later.

The course began in Daley Plaza, moved east past the Chicago Cultural Center (then the Chicago Public Library), and finished at Buckingham Fountain. The men’s first-place winner was Dan Cloeter of Indiana with a time of 2:17:52. Dorothy Doolittle of Texas finished first for women, clocking in at 2:50:47.