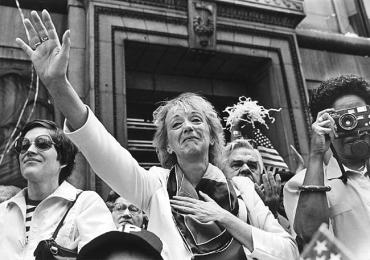 At the conclusion of America’s previous war, World War II soldiers were welcomed home across the nation with parades honoring their victory, their sacrifice. You can easily call to mind the iconic LIFE Magazine photo of the sailor kissing the nurse in Times Square. A soldier returning to Chicago remembers being given a crate of bananas from his local grocer, a token of gratitude. In sharp contrast, soldiers returning from the unpopular war in Vietnam didn’t get parades or gifts or thanks. The same politicians who sent them overseas refused to look them in the eye when they returned from duty. The shame of it all.

Eleven years passed and finally Chicago held a parade for its Vietnam veterans, albeit long overdue. On June 13, 1986, 200,000 people marched a parade route to Grant Park, the site where anti-war protesters rallied years earlier. An estimated 500,000 spectators cheered and applauded the passing veterans. It was a parade meant to heal – to finally acknowledge the veterans’ sacrifice and to offer apology for the neglect of the war’s many PTSD cases, the health benefits denied many vets, the stigma. All good intentions aside, a parade alone could not heal the heart of a nation still reeling from a controversial war.

‹ Tutmania at the Field Museum up