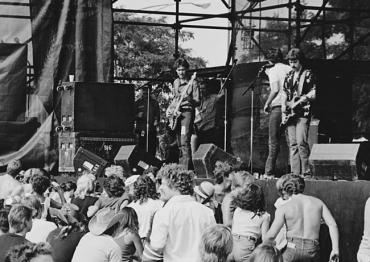 In the summer of  ’78, thousands converged upon a rickety Navy Pier for the first annual ChicagoFest. The festival lineup included Journey, Muddy Waters, and dozens of others.  Tickets were a mere $3.50 in advance and $4 dollars at the gate, which at the time seemed like a lot considering how much corporate sponsorship was involved. Mayor Bilandic, who brought the fest to the city, modeled the pop/rock/folk/blues festival after the enormously successful lakefront festival, MilwaukeeFest, even going so far as to contract the Milwaukee-based festival's workers.

ChicagoFest lasted 10 days, restoring the pier to its intended function as a “pleasure pier for public use.” The concert space was a gap between the warehouses at each end of the pier, and it was jam-packed with stages and gear, food and beer vendors, and radio stations that had moved their entire broadcast operations to the pier while the party wore on. The success of the festival lasted a few more years until it was canceled during Harold Washington’s tenure, but left an enduring legacy of Chicago summer festivals in its wake.