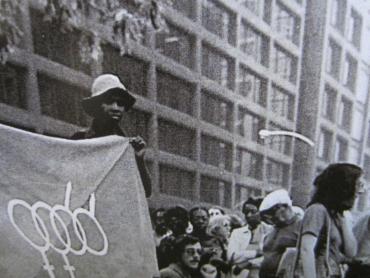 Taking its cue from the revolutionary events at Stonewall in New York City a year earlier, the LGBT community in Chicago held its first annual Gay Liberation March in June of 1970. This march (which came to be known as the PRIDE Parade) encouraged people to fight homophobia, to come out and raise awareness of the issues and injustices facing the community.

The march originated in an area of Washington Square Park called Bughouse Square, known as a hotbed for radical political discourse and where ideas that existed outside the mainstream could be freely expressed. Without a city-sanctioned parade permit, the activists and sympathizers courageously marched through the streets to the historic Water Tower Place and then pressed on to the Civic Center where they continued to rally in support of equal rights and personal freedom for all.

PRIDE continued to grow in the ’70s and ’80s, promoting visibility for the community and eventually gaining the support of many local politicians and businesses.