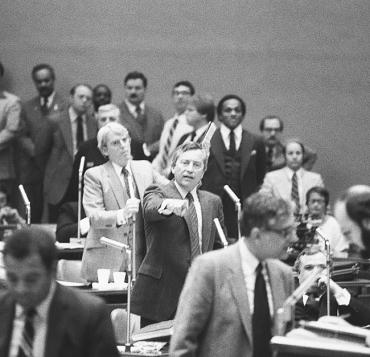 When Harold Washington became Chicago’s first black mayor, not everyone was thrilled by the appointment. Chicago’s mostly white political machine felt threatened by the arrival of a new mayor. A group of aldermen headed by Edward Vrdolyak and Edward Burke banded together to challenge Washington at every turn.

The 29 aldermen, having a majority vote, voted down every attempt by Washington’s administration to move forward, and likewise, Washington vetoed anything “The Vrdolyak 29” tried to accomplish. In short, nothing got done.

City Hall and Chicago citizens alike were frustrated by the endless stalemate. In May of  ’86, a court-ordered special election took place in seven newly mapped wards; this would finally put an end to the political merry-go-round.

‹ The Arms Race Protest of 1982 up AIDS Activism in Chicago ›