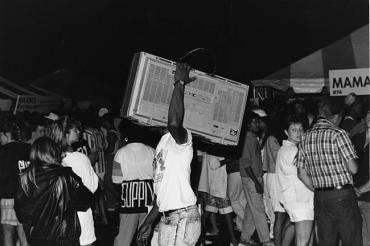 The first Taste of Chicago was held for only a single day on the Fourth of July, 1980. Chicago was getting serious about its summer festivals – ChicagoFest was all the rage at Navy Pier, Jazz Fest and Blues Fest were getting their start in Grant Park, and neighborhood festivals were cropping up in all corners of the city, too. So when restaurateur Arnie Morton proposed a festival devoted to small portions from the city’s food vendors, Mayor Jane Byrne and the City of Chicago bit on the idea.

The first annual Taste of Chicago took up the three city blocks just north of the Michigan Avenue Bridge. Nearly 250,000 people showed up that day to sample hot dogs, ribs, and Italian ice or to toss back a few cold ones in the hot sun. The turnout so dramatically exceeded the projected attendance numbers that the “Nation’s biggest picnic” was moved to Grant Park the following year.

In 1985, the addition of such live acts as the Grant Park Orchestra, Ashley the Robot, and a Pete Seeger and David Bromberg duo expanded the scope of the festival, filling the shoes of its recently terminated predecessor, ChicagoFest.