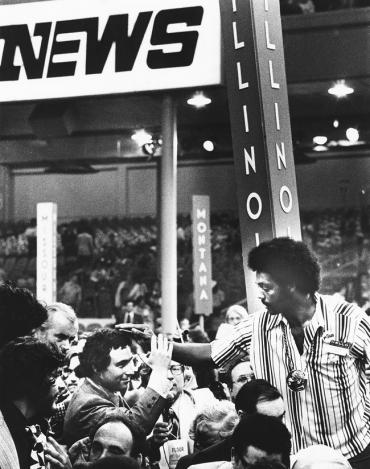 Jesse Jackson first visited Chicago from South Carolina when he was a teen. Despite the segregation of the city, he found the vibrant life of 1950s Bronzeville inspiring and empowering, freer that his life in Greenville. When he finished college at North Carolina A&T State University, he came north to study at Chicago Theological Seminary. There he connected with Chicago’s growing civil rights movement and eventually became a trusted member of Rev. Dr. Martin Luther King, Jr.’s inner circle. At King’s urging, Jackson became the head of Operation Breadbasket in Chicago. Jackson stood next to King on the balcony of the Lorraine Motel in Memphis on April 4, 1968 when King was killed by a bullet fired by James Earl Ray. Jackson emerged as an important civil rights leader, starting Operation PUSH (People United to Serve Humanity) in a former temple on 49th and Drexel to encourage empowerment of African-Americans and advocate for civil rights and social justice.

In 1972, Jackson, with Chicago Alderman William S. Singer, led a coalition of delegates to the Democratic Convention in Miami and unseated Richard J. Daley’s Machine-era slate of delegates, in effect announcing to the nation, and the world, that a new era in Chicago power politics was emerging.

At PUSH, Jackson worked to convince corporations to adopt affirmative action hiring programs. He also worked to support education and literacy development, through grassroots campaigns, radio broadcasts, and honors given to important national and international African-American leaders in business, the arts, and government.

In 1982, Jackson led a successful boycott of Mayor Jane Byrne’s ChicagoFest for not hiring enough minority contractors, convincing Stevie Wonder not to headline the Fest. The coalition of people supporting the boycott rolled directly into the effort to elect Harold Washington Chicago’s first African-American mayor in 1983.  Jackson continued his push into the political arena with his run for president of the United States in 1984. He was only the second African-American candidate in the country’s history to seek the office, the other being New York Congresswoman Shirley Chisholm in 1972. He won primaries and caucuses in South Carolina, Louisiana, Virginia, and Washington, D.C.  Jackson addressed the Convention in San Francisco that July. The nomination went to Walter Mondale, who lost to Ronald Reagan in November. Jackson ran again in 1988. His example is believed by many to have laid the foundation for Barack Obama’s successful candidacy of 2008.