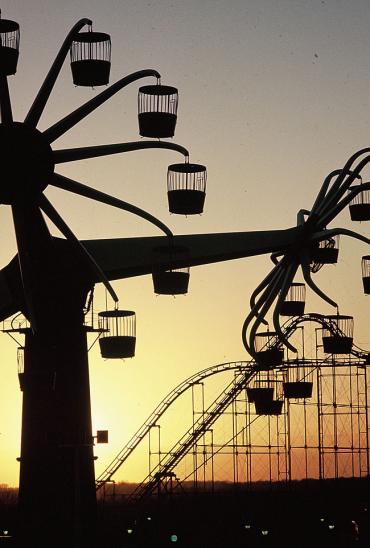 The Sky Whirl at dusk

Fresh paint, thick crowds of people, flowers spilling in every direction, the anticipation of what the day would hold – these were the sensations that overwhelmed the first visitors to Marriott’s Great America in 1976. When the gates finally did open, you were immediately confronted by the gilded, double-decker Columbia Carousel, the tallest carousel in the world. And the amazement didn’t stop there – park-goers arrived day after day to ride the Sky Whirl, the world’s first three-armed Ferris wheel; the Turn of the Century, an extended corkscrew roller coaster designed to delight and exhilarate; and Willard’s Whizzer, a roller coaster that gave you the impression of speeding away into a different world. There were parades and an endless stream of street performers. You could eat funnel cakes while watching fireworks signaling the end of the day.

Great America to some degree successfully restored the magical experience many Chicagoans remember having at the city’s lost amusement park, Riverview, during the first half of the twentieth century in Chicago.