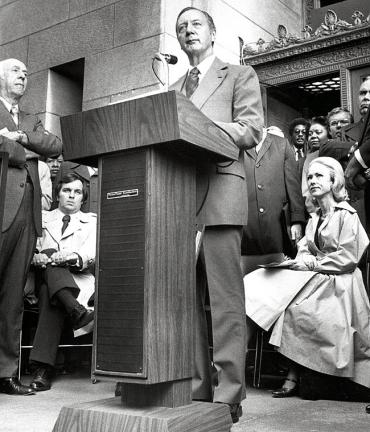 Mayor Bilandic at center, flanked by his wife and Richard M. Daley

In 1976, the question of who would succeed Mayor Richard J. Daley after his sudden death became contentious. Alderman Wilson Frost from the 21st Ward on the South Side and an African-American, was the president pro tempore of the City Council. Frost’s reading of the city’s charter suggested he was then mayor. However, Frost was locked out of the mayor’s offices and in the following days, behind-the-scenes dealmaking resulted in the City Council announcement that Alderman Michael Bilandic from the Bridgeport ward was now mayor.

Michael Bilandic had some pretty big shoes to fill afer the loss of the great mayor. Much of Bilandic’s first few months were spent successfully tending to the gravediggers’ strike, a threatened strike at the Lyric Opera, and an angry butcher’s union.Unfortunately, Bilandic did not command the same authority as Daley, and the old Democratic Machine was seen as vulnerable. When Bilandic faced Jane Byrne, a Daley loyalist and former head of consumer affairs, in the 1979 Democratic primaries, he lost. It was a blow to the old order.