Michael Jordan Signs with the Bulls 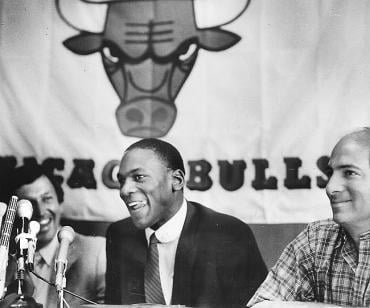 Michael Jordan at the 1984 NBA draft

One of the biggest sports superstars of all time was gifted to Chicago in 1984, when Michael Jordan signed with the Bulls. Jordan was the number 3 pick in the NBA draft,  after Hakeem Olajuwon and Sam Bowie, both strong centers who would go on to play for Houston and Portland, respectively. Quality centers were typically seen as the prize of the draft, considering how often they were the foundation of winning teams. But soon MJ’s success as the Bull’s shooting guard would change the association’s thinking about that.

Though Jordan was twice a NCAA Player of the Year while playing for the University of North Carolina Tar Heels and was generally thought a solid pick, few foresaw the powerhouse athlete he would become. Bernard King, a small forward who had shared the court with Jordan in the ’84 Olympics, famously prophesied, “All I can say is that the people in Chicago are in for a real treat.” A sweet treat, indeed. In 1985, Jordan was crowned Rookie of the Year and would go on to lead Chicago to six championship titles.

‹ Let There Be Light: The Cubs' First Night Game at Wrigley up The White Sox Get a New Look ›