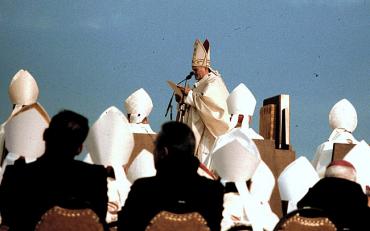 In 1979, Chicago was home to the largest Polish population in the world outside of Warsaw, so it was fitting that the first Polish pope in history should make a visit to the city. At the time, Chicago was also home to the largest archdiocese in the U.S., approximately 2.4 million Catholics. But the excitement at Pope John Paul II’s visit wasn’t reserved just for the Catholics and Poles; people of all faiths and backgrounds gathered to participate in the Pope’s three-hour Mass at Grant Park on that sunny October day.

During his stay, the pope travelled by motorcade through the city streets, standing in an open convertible and blessing thousands lined up to see him. The papal visit marked the first to Chicago, and only the second to the United States, so it was enormously significant for the city to be graced by his presence. Chicago Public School students were dismissed for the day and many adults were excused from work so that they could join the crowds welcoming the Pope wherever he went.

During the Mass at Grant Park, the largest Mass ever held in Chicago, the Pope spoke of all people being bound together in a “unity that transcends the diversity of our origin, culture, education, and personality.” And it is said that the thread of unity was palpable to the people who stood there together on that day.