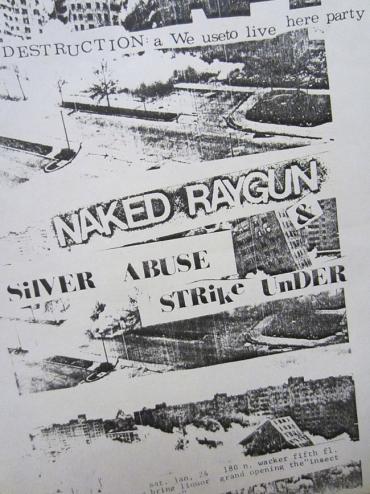 Chicago was home to a number of underground music scenes in the ’70s and ’80s, but none perhaps more unruly than the emerging punk and hardcore scene in 1977. Inspiration came from the New York artists then playing Chicago, including Patti Smith, television, Lou Reed, and mostly, the Ramones. Its earliest hotspots were dance clubs, not concert venues. La Mere Vipere on Halsted Street was a gay bar that morphed into Chicago’s first great punk bar with an edge that would be reflected in some of the bands that eventually came out of Chicago – a mixture of British-influenced punk, art school vibe, New York new wave feel, and definitely not hippie contrariness with an antistyle style and plenty of attitude. La Mere was located on a stretch of Halsted Street south of Fullerton and it burned down under mysterious circumstances in April, 1978, only to be replaced by a liquor store. When saddened fans complained publicly to Patti Smith at her Park West show that “they burned it down,” she said, “So your club burned down. Start another one!” The punk/new wave DJ/dance clubs O’Banion’s, Lucky Number, Neo, and the Smart Bar followed.

Everyone was waiting for the Sex Pistols to hit town, and tickets to their 1977 New Year’s Eve show at the Ivanhoe Theater on Clark Street were printed and sold ($4 general admission). The band was famously falling to pieces in front of audiences across the country before they finally imploded on stage in San Francisco at the Winterland Ballroom. They never played Chicago.

The early Chicago punk/new wave bands were a mixture of inspirations and styles. Jim Skafish’s band Skafish was notable for its inventive musicality and the absolute eccentricity and unabashed ugliness of its lead singer/songwriter/musical genius, Skafish.  Tutu and the Pirates were like crazed, fun-loving misfits from the ’70s basement rec room run amuck. The Immune System sported art school cool and minimalist aesthetics and Desmond carried working-class blues influences, but musically and theatrically it was dominated by the raging, roaming, intense vibe of its lead man, Jim Desmond. Plus there were The Dadistics. They could be heard at such places as Tuts, Gaspars, the Cabaret Metro (with the Smart Bar, Waves, and Stages all in the same space at different times), Misfit’s, Ruts, Medusa’s, C.O.D’s (which also burned down), and Exit.

Records could be found at Wax Trax on Lincoln north of Fullerton, and at Sounds Good on Ashland north of Belmont, which had a huge inventory of 45s, including Patti Smith’s “Hey Joe” backed with “Piss Factory.”

The shows were unpredictable and potentially explosive, even cathartic. They skirted the edges of chaos and good taste, and yes, they held a mirror up to society’s ugly underbelly, but mostly they were good, bratty fun, with city and suburban kids behaving badly and loving it. Stuffy, it wasn't; it was down and dirty. Dye your hair some shocking color and rip your stockings, honey. We’ll pogo til dawn.

‹ The Beat Goes On and On: Chicago House Music in the '80s up Rock and Power-pop ›