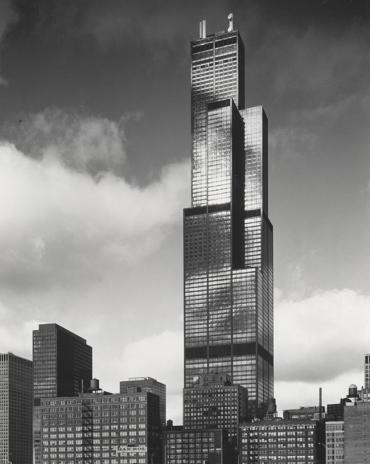 In 1974, Chicago’s skyline was dramatically altered with the completion of its newest resident: the Sears Tower. Dwarfing the buildings around it, the Tower topped out at 110 stories. It was the tallest building known to man. Curious passersby gazed upward, shielding their eyes from the sun. Here it was: the tallest building in the world. How could a building be so tall?

Fazlur Khan, a structural architect with Skidmore, Owings & Merrill, devised the system of nine tubes that would enable the Tower to support its own weight against the forces of gravity and wind. Each of the nine tubes is an individual skyscraper which supports the overall weight of the Tower, giving the Sears Tower its distinctive profile – a series of blocks that climb to the sky.

The Sears Tower was renamed the Willis Tower in 2009.