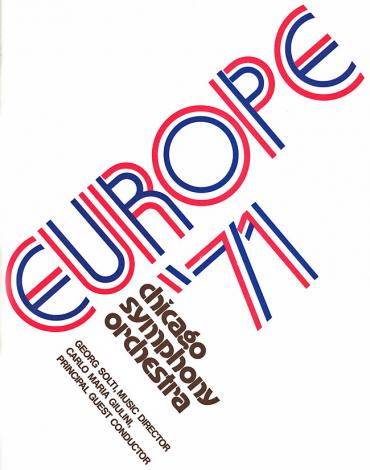 When Sir Georg Solti took over as music director of the Chicago Symphony Orchestra in 1969, he set out to prove to the world through recordings and concerts that the orchestral works of Mahler, Beethoven, Brahms, and Bruckner belonged to the CSO. To make it clear that he meant business, he took the orchestra on its first European tour in the fall of 1971. The tour included 25 concerts in Europe’s cultural capitals of Edinburgh, Brussels, Helsinki, Stockholm, Berlin, Milan, Vienna, Paris, and London, among others. No tour had been as ambitious to date. The CSO staff photographer, Robert M. Lightfoot III, accompanied Solti and the orchestra, documenting beautifully their movements across the continent. It was well received by many European critics, and upon the orchestra's return to Chicago, a ticker-tape parade was held to welcome home the “World’s Greatest Orchestra.” Chicago’s critical establishment and subscribers fondly remember Solti’s 20 years of leadership at the orchestra.