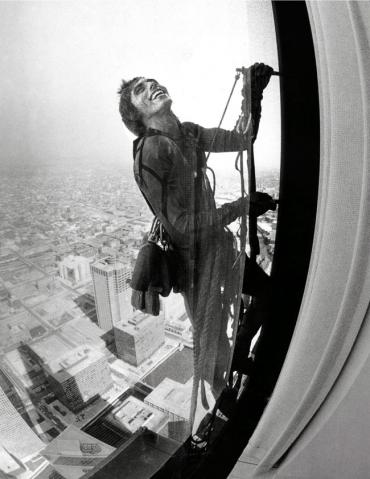 The 1970s and ’80s saw its fair share of skyscraper daredevils, but Chicago’s notable tall buildings were lucky enough to be hit twice in the same year by the activist/climber Spider Dan. On Memorial Day of 1981, Dan Goodwin (aka “Spider Dan”) climbed all 110 stories of the Sears Tower, despite strong winds and firefighter interference.

His climb wasn’t merely for sport – nearly six months earlier, rock-climber Goodwin had witnessed the MGM Grand Hotel fire that killed 85 people. A majority of the deaths were due to smoke inhalation on the highest floors where guests couldn’t escape to safety. The fire brought attention to the fact that despite the efforts of firefighters, the upper levels on buildings of this scale simply couldn’t be reached in the event of an emergency. Goodwin was determined to prove this point at whatever cost to his personal safety until reform was undertaken.

Later that same year, he successfully scaled the 100-story John Hancock building. In a moment of grace, Mayor Byrne called off the Chicago Fire Department, which was trying desperately to disrupt his climb.