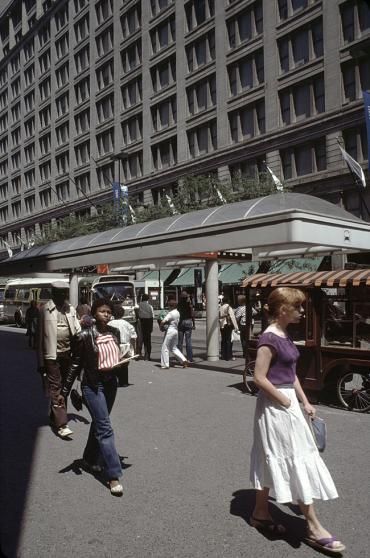 Credit:C. William Brubaker Collection, University of Illinois at Chicago Library (College of Architecture and the Arts)

By the late ’70s, State Street bore little resemblance to the bustling shopping district it once was. As the city’s population migrated to the suburbs, so did the famous corridor’s retail giants – Montgomery Wards, Sears, and Goldblatts, among them. Enclosed suburban malls were all the rage. You could move from one store to the next without ever having to brave the icy winter temperatures.

As an experiment meant to revitalize the area and draw consumers back into the Loop, Chicago city planners converted a nine-block stretch of State Street into a pedestrian mall. The street was then zoned for foot and bus traffic only. But the dreams of transforming State Street into a  shopping and café mecca – something more European in design – went up in diesel smoke instead. Without auto traffic, people seemingly forgot State Street was even there. The conversion was considered a failure and after 17 years, the car returned and so did the street’s reputation as a vibrant consumer destination.