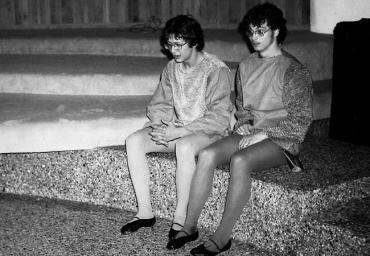 Before Steppenwolf was internationally renowned, the iconic Chicago theater company was, even in its infancy, talented and ambitious. Highland Park High School classmates Rick Argosh and Leslie Wilson brought the idea of producing a play to recently graduated Gary Sinise, who agreed. Their first production, Paul Zindel’s And Miss Reardon Drinks a Little, was performed at a Unitarian church on Chicago’s North Shore in 1974. Later that summer, the group produced Tom Stoppard’s Rosencrantz and Guildenstern Are Dead, during which time founding members Terry Kinney, Jeff Perry, and Gary Sinise all worked together for the first time.

By 1975, Steppenwolf was incorporated as a non-profit and the upstart thespians established a makeshift theater in the basement of Immaculate Conception Church and School in Highland Park. On the night of their first performance in the space, they were still painting walls. Performances from such ensemble members as John Malkovich and Laurie Metcalf hinted at the world-class acting Steppenwolf would become known for. The ’80s saw the company gain national and international attention.

During the company’s production of And Miss Reardon Drinks a Little, Rick Argosh was reading Herman Hesse’s novel Steppenwolf and suggested the name for the theater company.

‹ The Smart Museum of Art up