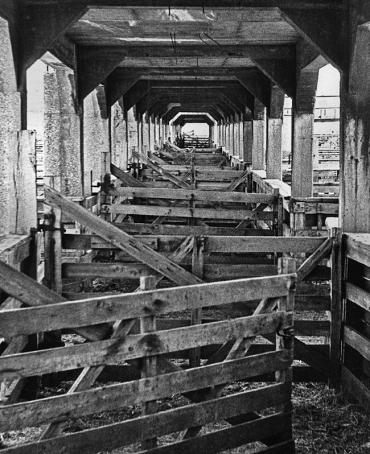 The “Hog Butcher to the World” saw the closing of the renowned Union Stockyards in the summer of ’71, after more than a century of operation. By the 1960s, the livestock industry was increasingly scattered across the country, rather than centralized in the heartland as it was in Chicago’s meatpacking heyday. Eventually the growth of the federal highway system made it possible for breeders to deal directly with packers, and a detour to Chicago, the middleman, became a costly stop for any hog.

The Union Stockyards at one time had been synonymous with Chicago. But by the time the meatpacking industry began to fade, only a few, mostly workers who had given their lives to the yards, seemed to mourn its passing.

Mayor Richard J. Daley worked a few shifts in the stockyards as a youth.

The limestone gate that once marked the entrance to the yards remains on the site as a monument to the all the sweat and blood of Chicago’s past.

In addition to processing meat, the Stockyards made creative use of by-products. They manufactured items like soap, glue, gelatin, shoe polish, buttons, perfume, and violin strings.

‹ Spider Dan Climbs Chicago up Tutmania at the Field Museum ›