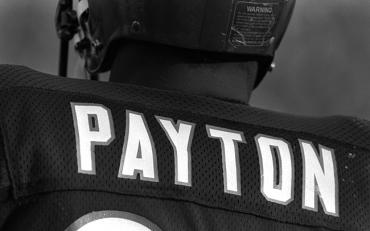 In January of 1975, Walter Payton was selected by the Chicago Bears from Jackson State as a first-round draft pick. “When I get through with Chicago, they’ll be loving me,” Payton stated after the draft. And love him they did. “Sweetness” rushed his way into the hearts of Chicagoans as a running back for 13 seasons with the Bears.

Bears coach Mike Ditka maintained that Payton was the best football player he’d ever seen. His reputation continued to grow as he broke record after record and was twice named the NFL’s Most Valuable Player. Payton was first crowned MVP in ’77 and again in ’85when he led the Bears to a Super Bowl championship title.

Walter Payton missed only one game in his entire career, demonstrating his incredible durability as a running back. The game was in his rookie season; he went on to play 186 consecutive games.

‹ The White Sox Get a New Look up