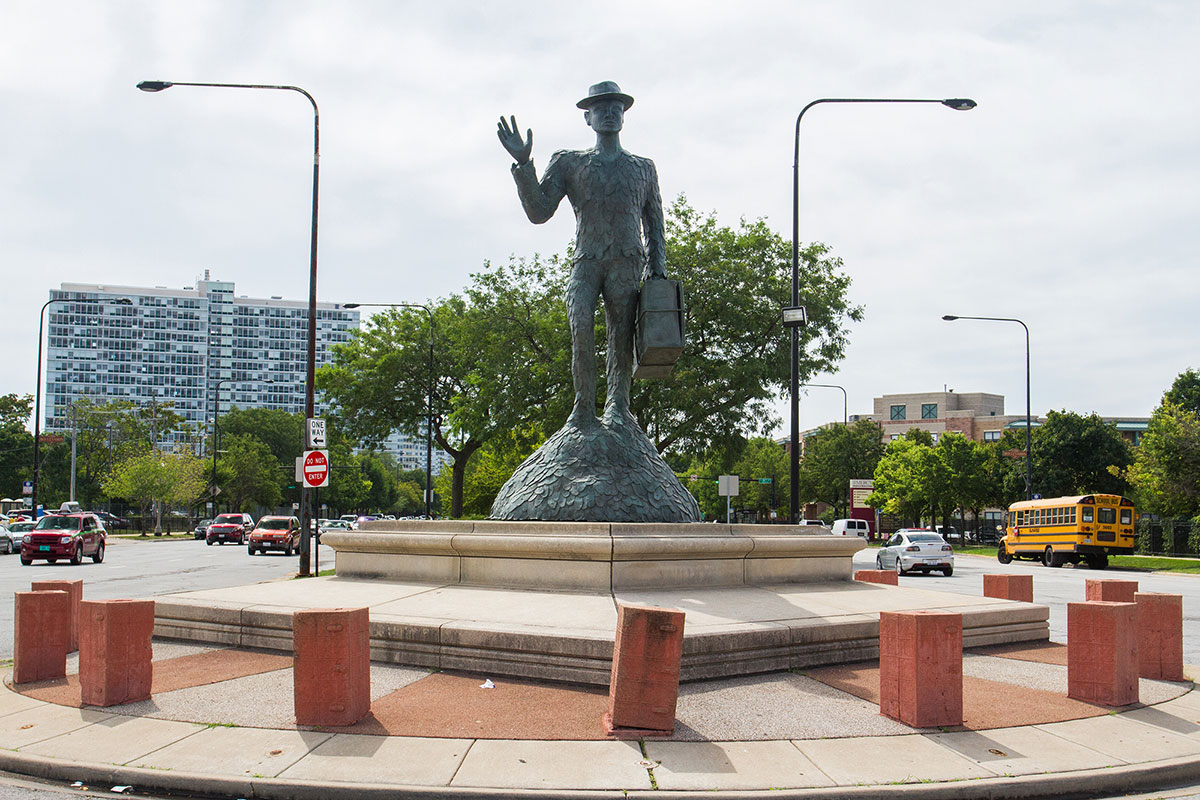 In the early twentieth century, African Americans left the rural South in a mass exodus called the Great Migration. These migrants were seeking opportunity – and fleeing Jim Crow.

A black-owned newspaper called the Chicago Defender helped to inspire many of them. In a series of articles over several years, the Defender and its publisher, Robert Abbott – who had himself come to Chicago from Georgia – championed the North as a “land of hope” where African Americans could pursue a better life.

By 1920, 50,000 black migrants had arrived in Chicago. But while Chicago did offer opportunity, the American dream remained segregated here in 1920. African Americans were limited to living, shopping, and attending church in a small area of the South Side called “the Black Belt” that initially stretched along South State Street from 22nd Street to 31st Street.

The growing black population needed goods and services denied to them in other parts of the city, and from this need emerged a great “Black Metropolis” – a thriving center of black art, culture, and commerce that was ultimately called “Bronzeville” to reflect the color of its inhabitants’ skin.

With retail stores, restaurants, theaters, nightclubs, and the first black-owned insurance company in the North, Bronzeville reigned as the place to be for black Chicago.

At the Regal Theater on 47th Street, notable entertainers such as Louis Armstrong and Duke Ellington performed frequently, and Nat “King” Cole got his start. Other notable Bronzeville residents included boxer Jack Johnson, gospel legend Mahalia Jackson, journalist and civil rights activist Ida B. Wells, the writer Gwendolyn Brooks, and many others.

Just as the need for goods and services helped spur a thriving retail and arts district, the need for access to medical care (and a place for black physicians and nurses to practice) inspired black surgeon Dr. Daniel Hale Williams to open Provident Hospital on 51st Street in 1891. A few years later, Williams performed the nation’s first successful open heart surgery at Provident.

Before the Great Migration and the nickname Bronzeville, the area was known simply as Douglas, named for U.S. Senator Stephen A. Douglas, who had developed the area (and famously debated Abraham Lincoln in the Lincoln-Douglas debates).

During the Civil war, Camp Douglas, a Union training and prison camp on the site of Douglas’ former estate, once held 10,000 Confederate prisoners at a time (up to 26,000 were held there over the course of the war). Many died there; an estimated 4,200 Confederate soldiers are buried in a mass grave at nearby Oak Woods Cemetery, the largest known mass grave in the Western Hemisphere.

Today, Bronzeville is experiencing renewed energy and development, with an emphasis on the arts and a respect for the rich cultural legacy that Bronzeville has brought to Chicago as a whole. 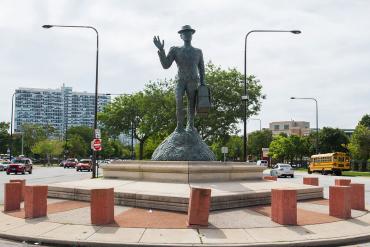 Starting around 1910, African Americans left the South for opportunity and freedom in the North. The “Great Migration“ is celebrated by this monument at 26th Place and Dr. Martin Luther King Jr. Drive. 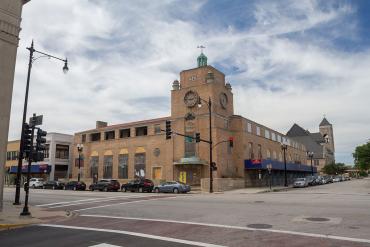 The Chicago Defender, a highly influential black newspaper, once published out of this building at 2400 South Michigan Avenue. The Defender urged African Americans to leave the South for northern industrial cities like Chicago. 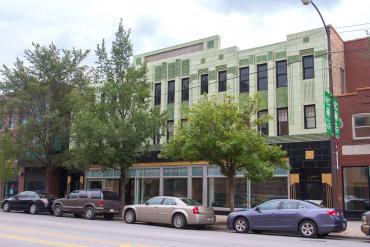 A writer for the Chicago Bee coined the term “Bronzeville” to reflect the color of neighborhood inhabitants’ skin. This building at 3647 South State Street, once home to the Bee, now houses the Bee Branch of the Chicago Public Library. 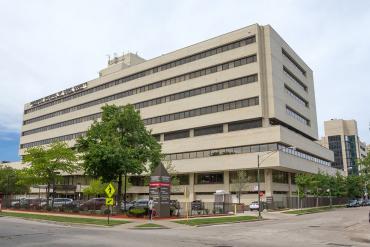 Dr. Daniel Hale Williams, a black surgeon, established Bronzeville’s Provident Hospital at 500 East 51st Street in 1891. Dr. Williams wanted to create a place for black nurses and doctors to study and practice. He performed the nation’s first successful open heart surgery there in 1893. 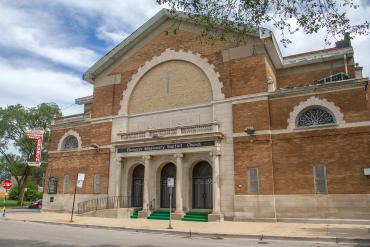 After the loss of his wife and child, blues pianist Thomas Dorsey was inspired to create a new form of music – incorporating both blues rhythms and religious lyrics – to give voice to the pain he felt. This new kind of music soon became known as gospel. Dorsey formed the first gospel choir at Ebenezer Baptist Church, 4501 South Vincennes Avenue. 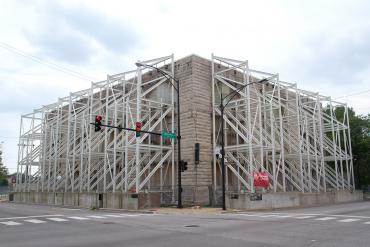 Gospel music innovator Thomas Dorsey went on to a legendary career as choir director at Pilgrim Baptist Church, 3300 South Indiana Avenue. A fire ravaged the Adler & Sullivan-designed building in 2006, leaving only the exterior masonry walls. A campaign to rebuild the church had stalled as of 2015. 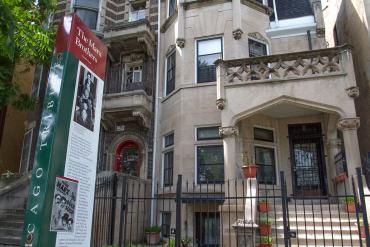 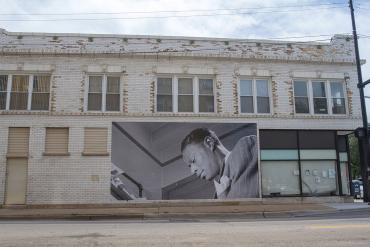 Singer Nat “King” Cole grew up in Bronzeville and began his career playing jazz piano at the Regal Theater. He is celebrated in a mural at 4301 South Dr. Martin Luther King Jr. Drive. 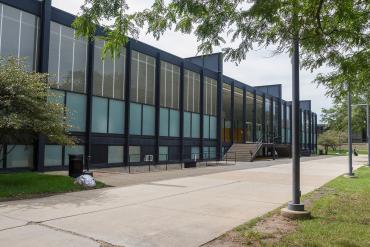 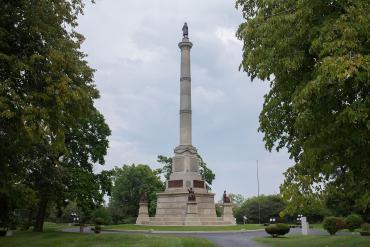 Prior to adopting the nickname “Bronzeville,” the area was known as Douglas, for developer and U.S. Senator Stephen A. Douglas, who had famously debated Abraham Lincoln in the Lincoln-Douglas debates. Douglas’ tomb is located at 636 East 35th Street. 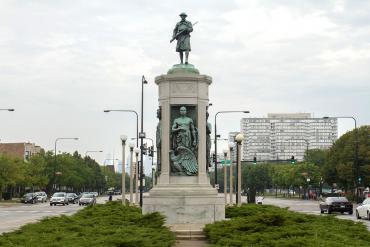 The Victory Monument at 35th Street and South Dr. Martin Luther King Jr. Drive honors the contributions of an African-American regiment of the U.S. Infantry that fought in France in World War I.