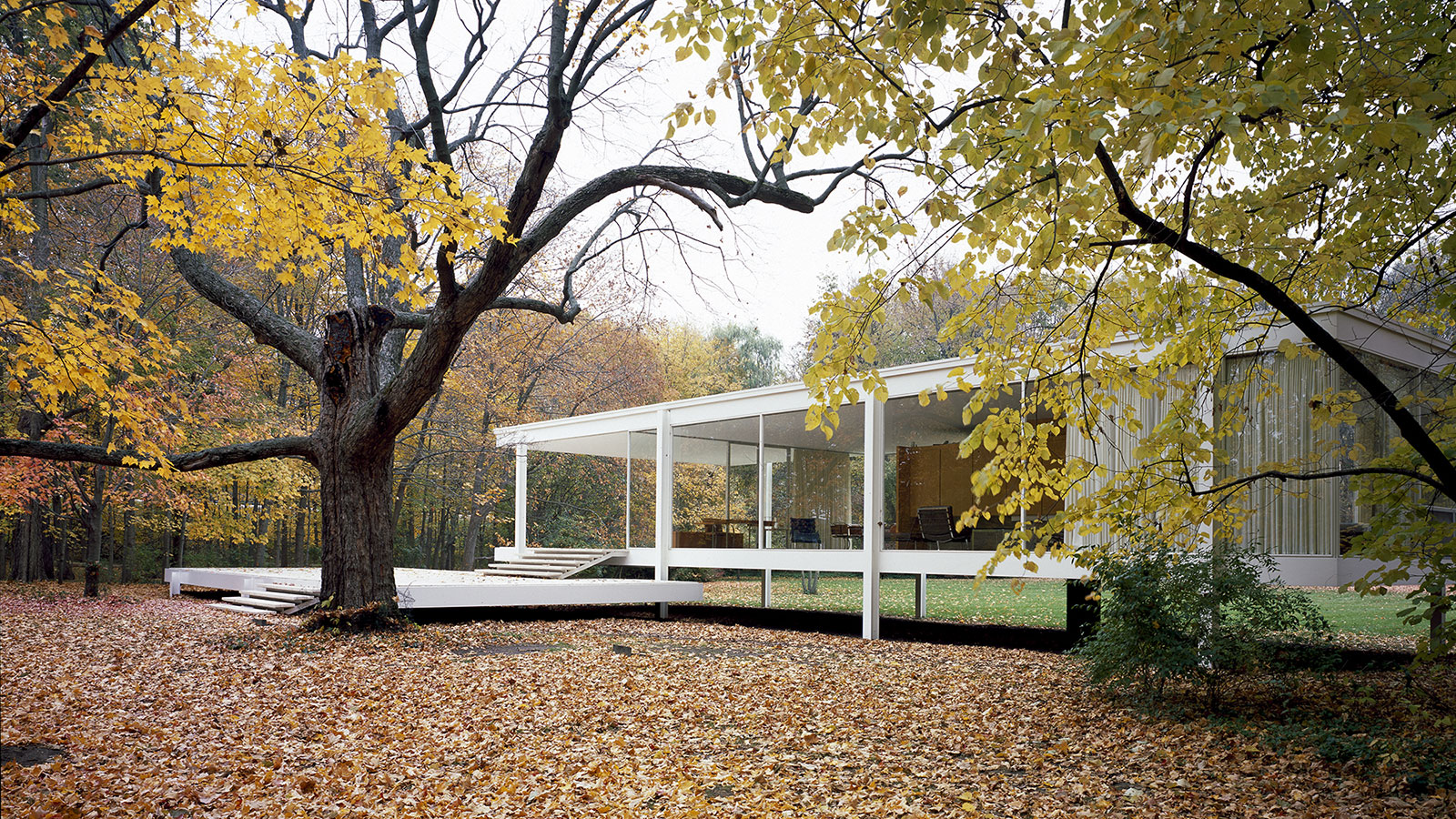 The Farnsworth House was first drawn in 1946; however, construction was not completed until 1951. Photo credit: Carol M. Highsmith / Library of Congress 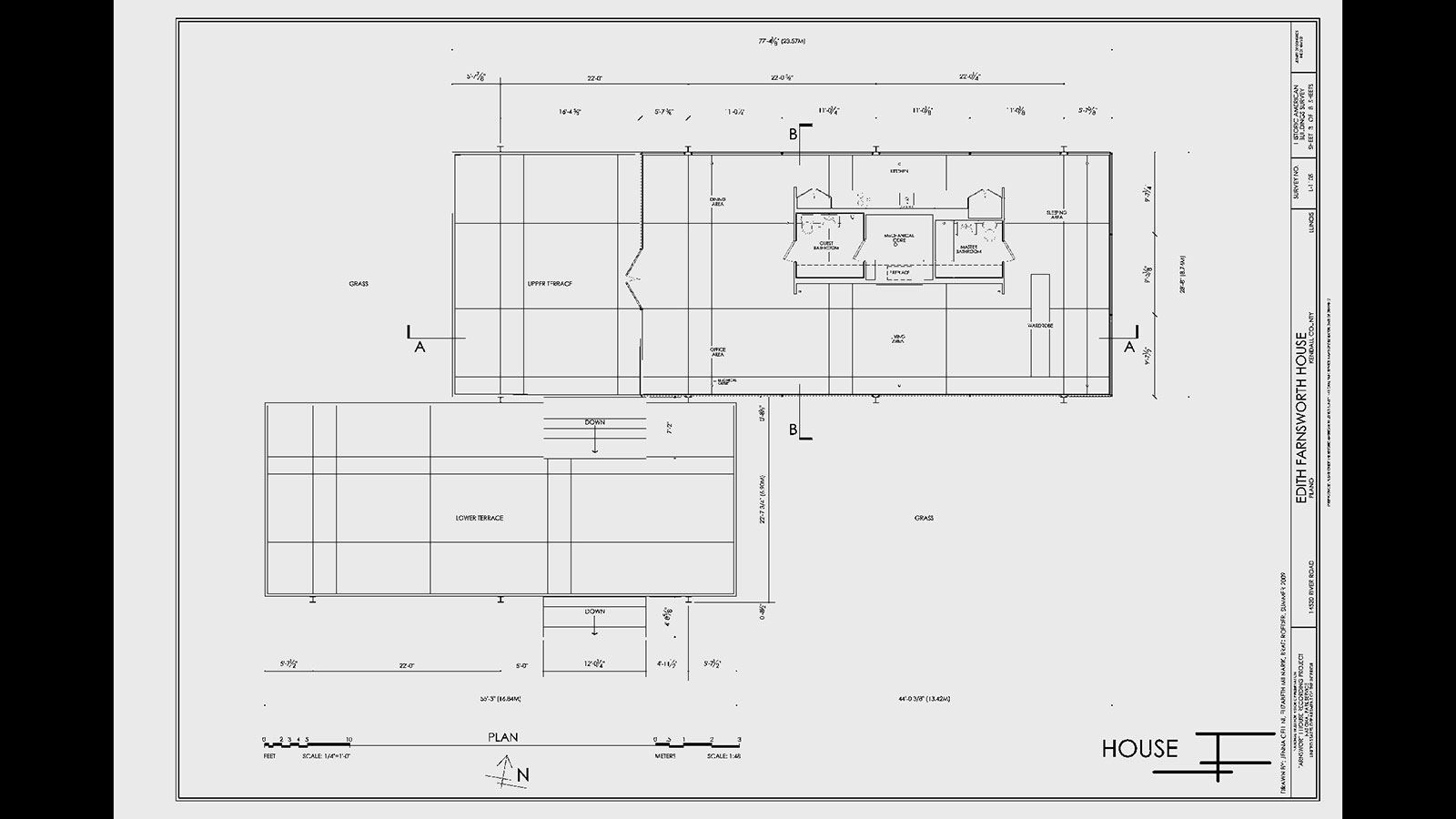 More than half of the square footage of the Farnsworth House is outdoor space. Photo credit: Library of Congress 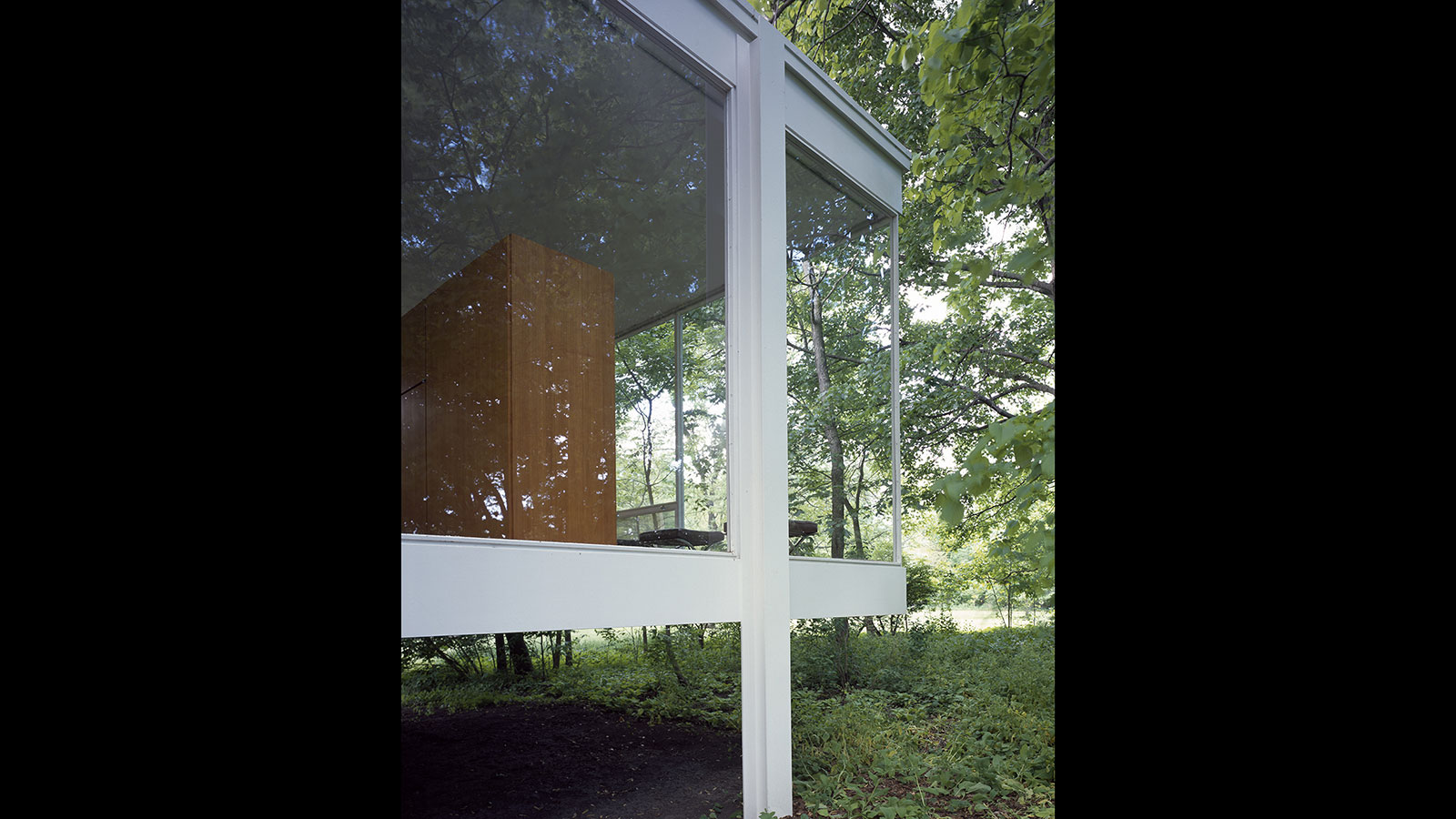 The house floats over and blends into the surrounding land. Photo credit: Carol M. Highsmith / Library of Congress 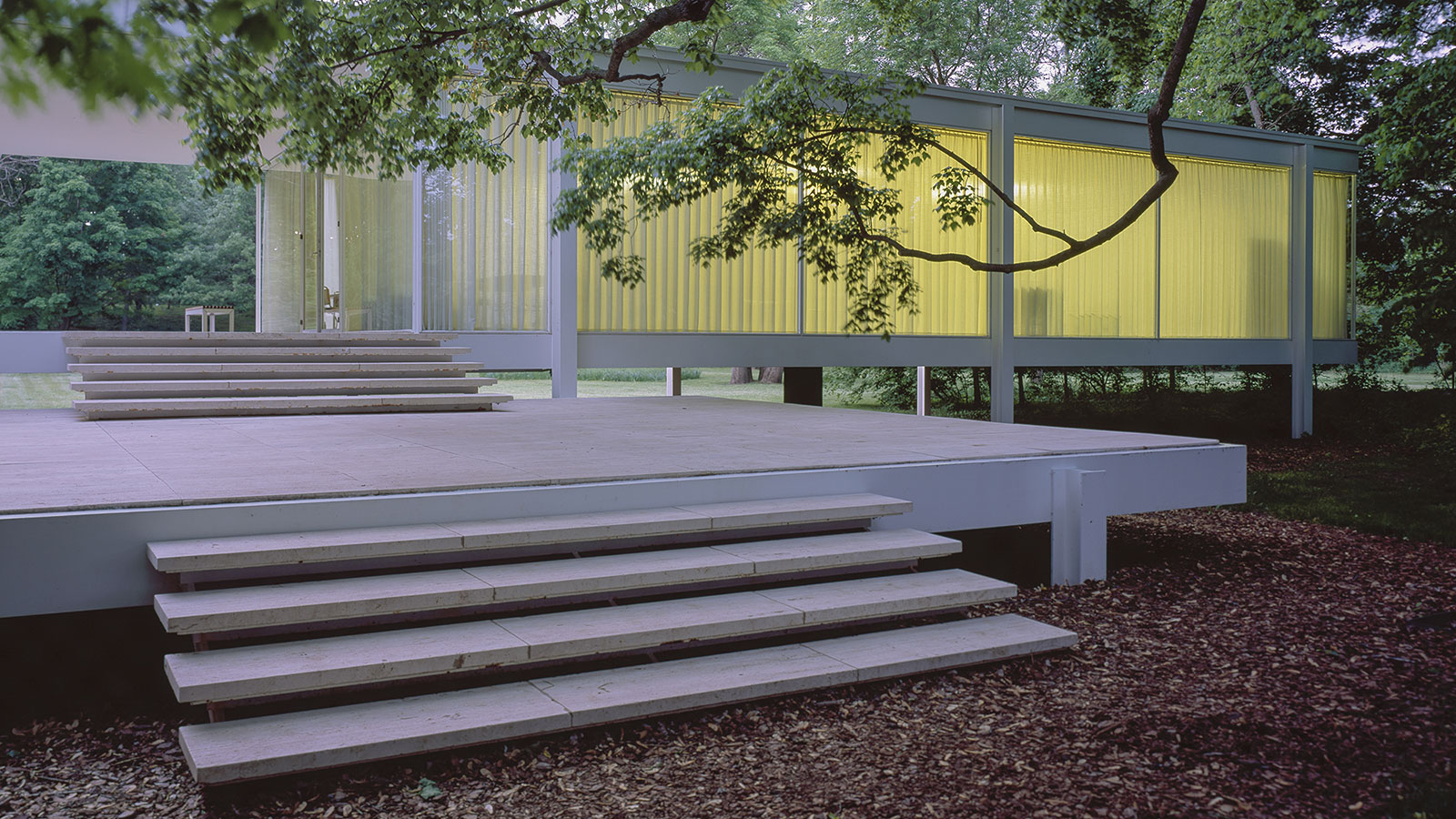 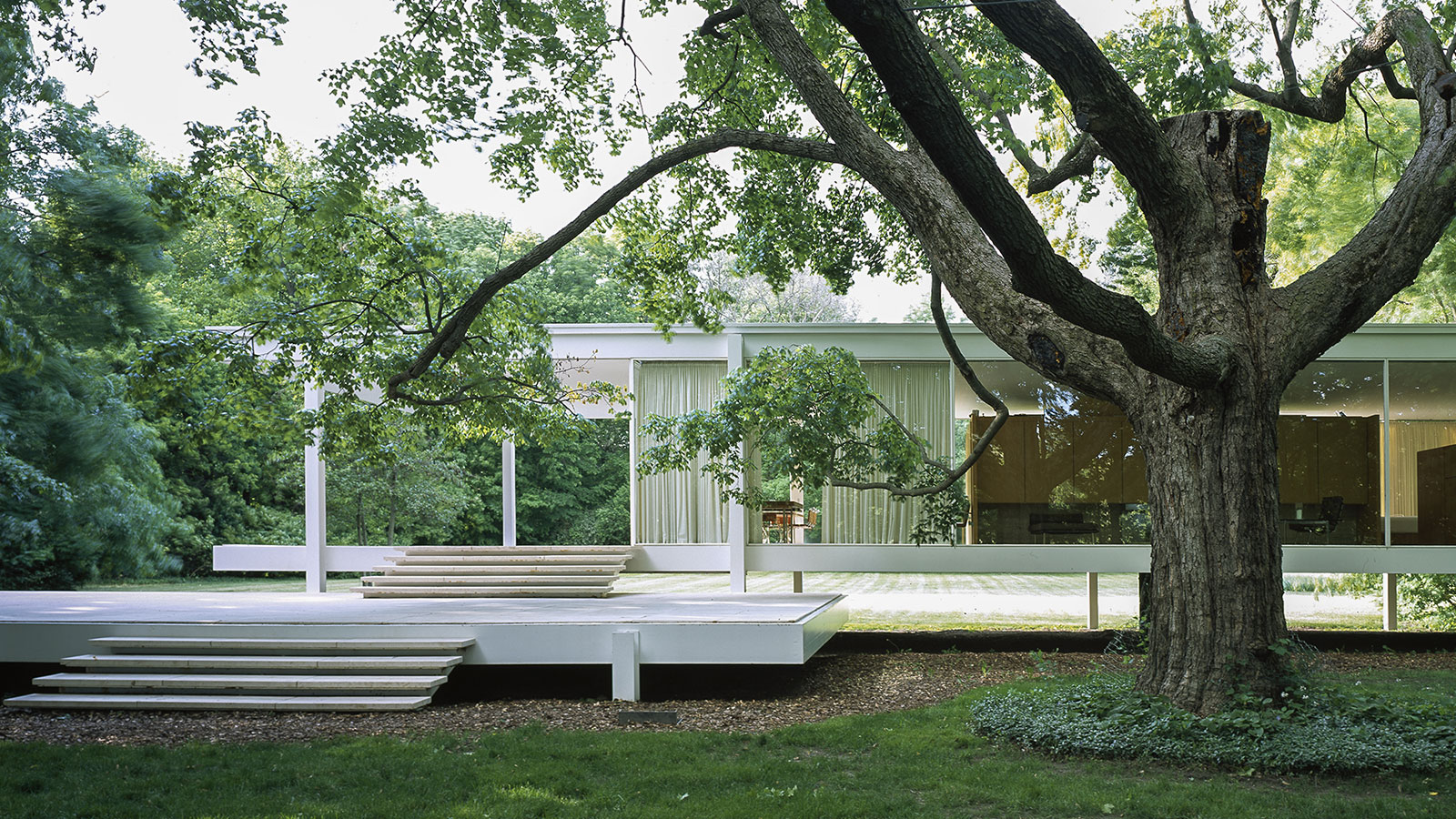 Next Home: The Guild House >

Ludwig Mies van der Rohe, an influential Modernist architect, was known for using the expression "God is in the details." Nowhere is his drive for perfection more visible than the Farnsworth House.

Mies was known as a pioneer of the International Style and as the last director of the famous Bauhaus school of art and design. Like many of his compatriots, he immigrated to the United States on the eve of World War II under both economic and political pressure.

In Chicago in 1938, Mies accepted a position as the director of Armour Institute of Technology (now Illinois Institute of Technology). His buildings there - essays in brick, steel, and glass-were designed on a grid system. The most famous, Crown Hall (1956), used an elegant steel structure to suspend its ceiling high above a 2600-square-foot, glass-enclosed space.

In 1945, Edith Farnsworth, a Chicago doctor, poet, and musician, purchased nine wooded acres outside of Chicago for use as a weekend home and selected Mies as her architect. Mies found the site to be so beautiful that he declared the home's views should be unobstructed, so he designed a house with glass walls.

Mies exhibited early drawings of the house in 1947, making it one of the most talked-about houses of the decade long before it was built. Architect and critic Philip Johnson took the idea for his own Glass House, itself an influential landmark of Modernism. Construction began in 1949.

Early designs called for a bolted steel frame, concrete floor, and student labor, but Farnsworth chose to proceed with a higher grade of construction, materials, and finishes. The house was elevated above what was thought to be flood stage by a welded steel frame. The floor and ceiling were suspended from the frame, and the glass walls fixed between them.

The house used the same travertine floors as the upper and lower terraces, further blurring the line between indoors and out. While the structural elements were exposed as part of the design, imperfections and scars from the welding process were carefully removed.

Mies and his client had become close friends over the period of incubation, design, and construction. But as construction costs rose, their friendship started to crumble. In the absence of a written contract, Farnsworth balked at what she saw as cost overruns. Mies responded by filing a lawsuit. After five years, a settlement in Mies' favor granted him a small percentage of his court costs.