National system of interstate and defense highways. Published by the American Automobile Association, June 1958. Courtesy of the Library of Congress This photo is believed to show construction of Interstate 55 in Missouri in the early 1960s. Photo by Garland D. Fronabarger, date unknown. Credit: Southeast Missourian Archive Sign for the Interstate Highway System saluting President Dwight Eisenhower, who initiated the system in the 1950s. Photo by Carol M. Highsmith, date unknown. Courtesy of the Library of Congress The intersection of several highways in Flagstaff, Arizona. Courtesy of flikr / Xomiele, 2012 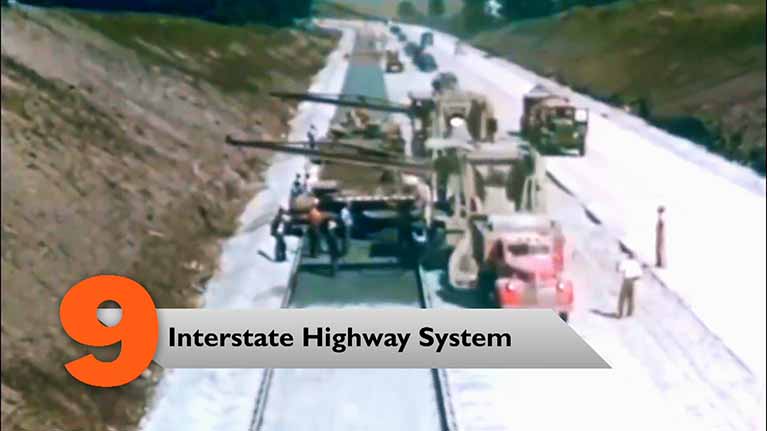 It had been proposed and debated for decades. But ironically, it was President Dwight D. Eisenhower – a small-government Republican – who finally succeeded in launching the largest engineering and public works project in human history: the $129 billion Interstate Highway System.

Eisenhower had seen the value of good roads firsthand as he led troops through Germany on the Autobahn during World War II.

“Eisenhower was blown away by the movement of his own troops and how effective that was,” said Dan McNichol, author of The Roads That Built America: The Incredible Story of the U.S. Interstate System.  “He said, ‘We need to have something like this.’”

For decades, America’s highways had been a patchwork of mostly locally funded roads. In 1919, America’s first transcontinental military convoy set out on the Lincoln Highway to test the war-readiness of the country’s infrastructure, and it took a full two months for them to make it from the East Coast to the West Coast.

Eisenhower, then a young lieutenant colonel, was part of that convoy and devoted an entire chapter to it in his memoir, At Ease: Stories I Tell to Friends.

“We know from his writings that he was miserable,” said Kay Shelton, president of the Lincoln Highway Association. “He was fairly frustrated at how many times vehicles would get stuck in the mud, and they would have to stop and pull them out, and he was frustrated that these heavy vehicles would break wooden bridges.”

Eisenhower became commander-in-chief in 1953, and with Cold War tensions rising, he dedicated himself to developing the nation’s highway system, partly as a matter of national defense. In addition to wanting to move weapons and troops quickly if needed, he knew that the highways would be life-saving infrastructure in the event of an attack.

“Eisenhower thought that rebuilding the cities, rescuing people, all of that hard work would happen along the interstate system,” said McNichol.

He also believed that it would help cut gridlock, make driving safer, and jumpstart the nation’s economy.

So when he finally was able to sign the Federal Aid Highway Act of 1956, creating the Highway Trust Fund and eventually the Interstate Highway System, he considered it his crowning achievement. In it, Congress mandated that revenues from the federal gasoline tax provide 90 percent of the cost of the construction for the system, with the states picking up the remaining 10 percent.

Just seven weeks later, workers broke ground on the first stretch of the highway in Missouri, on a section of what is now I-70.

It was the first of many. From coast to coast, construction crews made way for 41,000 miles of new road. They used 2.3 billion tons of cement and crushed rock and strengthened it with millions of miles of steel reinforcement bars. They built 55,000 bridges and overpasses, more than 100 tunnels, and used more than a billion pounds of dynamite and other explosives.

“It was like spontaneous combustion, [but] spontaneous construction all over the country,” said McNichol. “Inside of a decade, they built half of the largest earth-moving, civil engineering project in the world.”

The sheer volume of work and number of people dedicated to the initiative led to major innovations in the construction industry. Before the interstate, road construction was typically done with farming equipment. But the size and scope of this project demanded bigger and better tools.

Everything they built had to follow the strict geometric and construction standards set forth in the act. The roads, for example, needed a minimum of two travel lanes in each direction, exactly 12 feet- wide each, with a 10 foot-wide, right paved shoulder, and a 4 foot-wide left paved shoulder. The standard overhead clearance, meanwhile, was designed to accommodate military convoys.

This standardization of the materials, specifications, and signage were all designed to make the ride more predictable and thus safer.

“The interstate system’s standards create uniformity,” said McNichol. “Uniformity seems banal, but it’s that uniformity that keeps you alive. There’s no wondering, ‘Is the asphalt going to change to concrete or brick? Is the road going to suddenly get narrow?’”

It didn’t take long for that homogenization to become a cultural norm, extending beyond the on-road experience to retail and dining options along the highway exits.

The new highway system bolstered many other industries, as well, allowing trucks to deliver goods quickly and directly to any destination – something railroads couldn’t do.

But while the interstates were good for manufacturers, developers, entrepreneurs, retailers, and commuters, they had a devastating impact on many people living in America’s cities.

Eisenhower had initially envisioned loops around cities, which would allow for quicker construction and avoid the cost and complications of land acquisition.

But in an era of rapid suburbanization, McNichol says that the influx of construction jobs that the interstate brought was “kind of a bone thrown to the cities.”

And it happened at a time when other “urban renewal” initiatives were gaining momentum and were often used in tandem with highway construction to raze mainly low-income African --American and ethnic neighborhoods. Among them was the Housing Act of 1954, which provided federally backed mortgages that encouraged local developers to acquire land in areas perceived to be “blighted” and to target them for redevelopment.

According to late urban historian Raymond Mohl, who extensively studied the effects of the interstate system on urban populations, "The problem...is one person's slum may be another person's home.”

Between 1957 and 1968, at least 330,000 urban housing units were destroyed as a direct result of federal highway projects, according to a report by the National Commission on Urban Problems. By the early ’60s, those projects dislocated an average of 32,400 families each year.

Low-income residents often ended up moving into even worse, often overcrowded housing or into housing projects that were often isolated by massive highways or interchanges. “The forced relocation of blacks from central-city areas triggered a massive spatial reorganization of urban residential space,” wrote Mohl. “The expressway building of the 1950s and 1960s, then, ultimately helped produce the much larger, more spatially isolated, and more intensely segregated second ghettos characteristic of the late twentieth century." 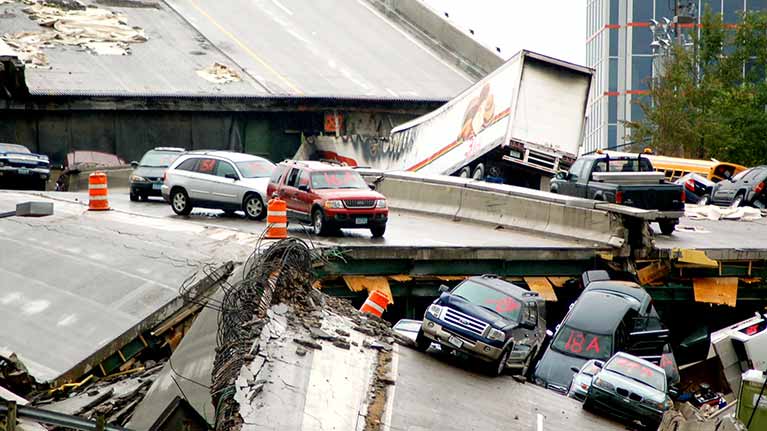 For better or worse, the Interstate Highway System had paved the way for a massive reorganization of America, much as the canals and railroads did in previous centuries.

“The interstate system was the gas on the fire that really pushed us into the modern age,” said McNichol.