The laying of the cornerstone for the Lincoln Memorial on February 12, 1915. Photo by Harris & Ewing. Courtesy of the Library of Congress The Lincoln statue under construction in the Lincoln Memorial. Photo by Underwood & Underwood, circa 1928. Courtesy of the Library of Congress Dedication of the Lincoln Memorial on May 30, 1922. Photo by the National Photo Company. Courtesy of the Library of Congress Chief Justice William H. Taft turning over the memorial and President Warren G. Harding receiving it on behalf of the United States on May 30, 1922. Photo by the National Photo Company. Courtesy of the Library of Congress Revolutionary People's Constitutional Convention at the Lincoln Memorial on June 19, 1970. Photo by Thomas O'Halloran and Warren Leffler. Courtesy of the Library of Congress 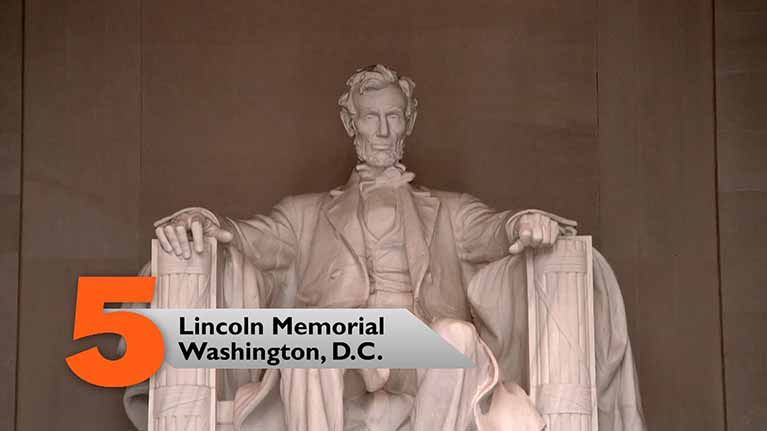 On May 30, 1922, a large crowd gathered for the dedication of the Lincoln Memorial on the National Mall in Washington, D.C.

“Here is a shrine at which all can worship,” Memorial Chairman William Howard Taft told the crowd. “Here an altar upon which the sacrifice was made in the cause of Liberty. Here a sacred religious refuge in which those who love country and love God can find inspiration and repose.”

Yet even as he said those words, the audience that gathered to hear them was divided by race. All African Americans in attendance, regardless of position or status, were directed to a “colored section.”

In fact, the dedication ceremonies were briefly delayed when some of them refused to be seated there and left in protest. And so it was that the Lincoln Memorial, designed to exude and celebrate national unity, also became a temple of dissent.

During a decade of planning, careful attention was given to ensuring that the memorial would avoid controversy, make only indirect references to slavery and other still divisive topics, and instead celebrate the unification of the nation.

The location of the memorial was chosen for its symbolism. The architects of the National Mall had envisioned a monument to Lincoln on that site, visible from both the Capitol dome and Arlington National Cemetery, which holds the graves of both Union and Confederate soldiers, and next to the Potomac River, the former dividing line between the Union and Confederate territories. A memorial bridge would be constructed across the Potomac to join those two spheres and mark a new era in that relationship.

For the building itself, architect Henry Bacon emulated a Greek temple in an homage to the ancient founders of democracy. But while the Greek temples held idols, this would hold the likeness of Abraham Lincoln, crafted by sculptor Daniel Chester French.

Ground was broken for the memorial on February 12, 1914. Because the massive structure was to be built on reclaimed tidal marshes, its steel and concrete foundation is held in place by massive piers that sink up to 65 feet into the bedrock below.

To further reinforce the concept of unity, the monument would combine stone from six states on both sides of the Mason-Dixon Line.

On either side of Lincoln are texts from two of his most famous speeches: his second inaugural and the Gettysburg Address.

The Emancipation Proclamation is, notably, nowhere to be found. In fact, the only reference to slavery is in one of the murals by Jules Guerin, which portrays two recently freed slaves.

Historian Lonnie Bunch said that the decision to set aside the civil rights issues, which continued to deeply divide the country when the monument was under construction, was deliberate.

But the way the memorial, and the space surrounding it, have been used since the memorial’s dedication is an enduring reminder that dissent might be even more vital to a democracy than unity.

“The Lincoln Memorial becomes a site of protest, or a site of promise, depending on your politics,” said historian Lonnie Bunch. “It becomes the place that says to America…‘We’re asking you to fulfill the promise of Lincoln.’”

The first time national attention was drawn to the site as a scene of protest was on Easter Sunday, April 9, 1939. After the Daughters of the American Revolution refused to allow world-famous, African American contralto Marian Anderson to perform at their hall, the Roosevelt administration arranged for her to perform instead in front of the Lincoln Memorial. First Lady Eleanor Roosevelt was in attendance.

Then on August 28, 1963, the memorial grounds hosted the rally for the March on Washington for Jobs and Freedom, a high point of the civil rights movement. An estimated 250,000 people heard Martin Luther King Jr. deliver his historic “I have a dream” speech on the steps of the Lincoln Memorial. Echoing the Gettysburg Address, King evoked the symbolism of the site and the dual promises that Lincoln died for – equality and unity:  “Five score years ago a great American in whose symbolic shadow we stand today signed the Emancipation Proclamation. This momentous decree is a great beacon light of hope to millions of Negro slaves who had been seared in the flames of withering injustice…But one hundred  years later, the Negro still is not free.”

The location has continued to be a sacred space for Americans fighting to further the ideals of democracy – in 1970, during a candlelight vigil following the Kent State shootings; in 1979, as the relatives of American hostages in Iran gathered to show their resolve and ask for the release of their loved ones; and in 2007, when thousands gathered there before launching a march to the Pentagon to protest the war in Iraq.

Today, in a city filled with monuments, the Lincoln Memorial continues to stand apart, both in its grandeur and in the place it holds in the American imagination. It draws thousands of visitors each year – people who come to reflect on where we’ve been as a nation, the virtues that we hold in common, and the work that remains to be done to achieve our democratic ideals.