A standing Confederate soldier by sculptor David Richards before being mounted on the Confederate war memorial in Forsyth Park, Savannah, Georgia on June 2, 1879. Photo by Pierre O. Havens. Courtesy of the Library of Congress A copy of Confederate Veteran magazine from 1900 features the unveiling of a standing soldier monument in Owensboro, Kentucky. Courtesy of the Duke University Libraries via Internet Archive A U.S. Soldiers Monument at Antietam National Cemetery in Sharpsburg, Maryland. Photo by Jack E. Boucher. Courtesy of the Library of Congress The monument dedicated to Confederate prisoners of war who died at Camp Douglas in Chicago has been the site of protest since before it was dedicated on August 28, 1895, shown here. Photo by B. W. Kilburn. Courtesy of the Library of Congress < Previous Monument: The Statue of Liberty 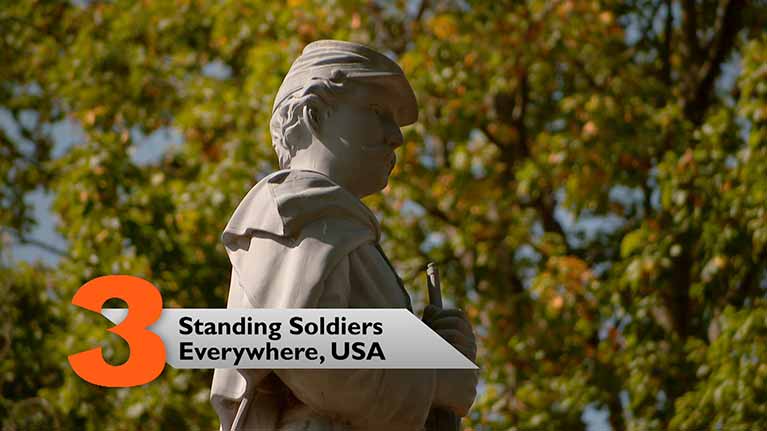 The Civil War was devastating in its scope and size. Nearly half of the nation’s young men left home to fight, and more than 600,000 of them never returned.

Past war memorials had always been triumphant, reflecting a strong sense of military heroism. But this war required something different – something that would honor the dead, pay tribute to the everyman citizen soldier, and tend to the deep wounds of the living.

A new breed of a solemn tribute emerged: statues of a lone, nameless soldier, representing every hometown hero. His gaze is fixed on a point in the distance, his weapon resting at his side.

There are at least 2,000 standing soldiers, or silent sentinels, as they are sometimes known, throughout the U.S. The vast majority are in the North.

Over time, they have come to mean very different things to different people. And today, those erected to commemorate Confederate soldiers are now part of a larger conversation about who erected them, what message they intended to convey, and whether they deserve to remain in our public spaces.

One of the earliest prototypes of the standing soldier was designed by Irish-American immigrant Martin Milmore and initially erected in front of Boston’s city hall in 1867. He stands at ease,his hands gripping a musket at the end of the barrel, the stock resting on the ground.

“It was not triumphant,” said the late art historian Cynthia Mills. “It didn’t gloat about victory. It embodied rather a sense of sadness and loss, a very human feeling of the citizen soldier.”

For several years, other standing soldiers emerged sporadically in the North and South. It wasn’t until the end of the nineteenth century that a combination of technical advances in the granite and bronze industries combined with political and social shifts, allowing for the motif’s mass production and resulting in a monument-building boom.

Northern foundries, eager to find a new market after the war, offered customizable soldier monuments in catalogs. Their main customers were smaller towns that were unable to commission more elaborate Civil War monuments but still longed for a local tribute to hometown heroes. The molds had slight variations in their size, cost, type of weapon, and uniform. In many cases, the same companies produced both Union and Confederate monuments, altering only the shape of the hat, the length of the cape, and, of course, the initials on the belt buckle: US for United States or CS for Confederate States.

They all have non-descript, though clearly Anglo-Saxon, features.

Companies such as Monumental Bronze, whose cheaper, zinc versions cost a mere $450, offered their customers an installer who would travel along with the monument and assemble it on site.

In the North, the monument boom was led by veterans who were then growing as a political constituency and organizing for pensions through formal associations such as the Grand Army of the Republic. For them, the statues not only memorialized their legacy and their cause, they reminded the public of their sacrifice.

In the South, where organized associations of Confederate soldiers were more politically risky, it was the daughters of veterans who organized the memorials. According to several historians, their campaign aimed not only to honor the dead, but to celebrate and preserve a fading social and economic order. As such, the monument boom in the South lasted much longer.

“It was never stated in the monuments, but understood…that it was about the reassertion of white power in the South after the failure of Reconstruction,” said Kirk Savage, historian and author of Standing Soldiers, Kneeling Slaves: Race, War, and Monument in Nineteenth-Century America.

Historian Lonnie Bunch, who is also the founding director of the Smithsonian's National Museum of African American History & Culture, says that first real monument boom in the South coincided with the early Jim Crow era.

“You have people really trying to make sure that after Reconstruction, when the Union army pulled away from many places in the South, they were trying to return to the order that once was,” said Bunch.

“[They] were really saying, ‘You are not going to force us to change…We will always celebrate what we believe are the rights and ideals of a white Southerner.’”

In that way, the construction of Civil War monuments maintained its relevance for far longer in ex-Confederate territory than it did in the North, says Savage, “where it just became yet another war that we had participated in.”

Indeed, monument building petered out in the North around the turn of the century. But in the South, the monument-building boom was just getting started. There, Civil War monuments quickly expanded beyond the lone soldier to include more classic, militaristic monuments, the re-naming of several public institutions for Confederate heroes, and, of course, the raising of Confederate battle flags.

A recent study by the Southern Poverty Law Center found that there were two major periods in which the dedication of Confederate monuments and other symbols spiked – the first two decades of the twentieth century and during the civil rights movement.

Today, as some communities have fought to preserve these monuments, others have removed them.

Lonnie Bunch, who is African American, says that he’d like to see them preserved.

“I felt very strongly, as somebody who is a historian, who struggled early in my career because so much of African American history was erased, that I would never want to see any history erased,” he said. “I’d want to see history contextualized and problematized….I love the notion of taking statues, if you’re going to take them down, put them together and explain to people, not what you think they mean, what they actually symbolize.”

Savage agrees. “I think what’s more important is the dialogue around it…that people actually, first of all, confront the historical truth of what the Confederacy was – a nation that was founded to perpetuate the institution of slavery. That was the reason for the Confederacy’s very being,” he said.

“In a way, what happens to the monument is less important, to me, than that process of actually coming to an honest reckoning of what this conflict was about.”