Fairmount Park, and its centerpiece waterworks, grew from the need to protect Philadelphia's waterfront and control the quality of the city's water supply. Photo credit: Steve Boyle

The city pursued a waterworks in a desperate response to yellow fever epidemics that had killed tens of thousands of Philadelphians in the 1700s. Photo credit: Corbis

In this map from the 1750s, Fairmount is seen northwest of Philadelphia’s city center. Its location upriver and uphill of the main city made it an ideal location for a pumping station. Photo credit: Steve Boyle

The first pumping station was installed in the center of the city, on the site of today's City Hall. Photo credit: Steve Boyle

A walking path in Fairmount Park has views of the Schuylkill River. Photo credit: Steve Boyle

The Water Works' graceful neoclassical architecture and landscaped gardens made the site a major attraction. Photo credit: Library of Congress

The Philadelphia Art Museum now stands on the "Mount" for which the park was named. Photo credit: Steve Boyle

It's logical to assume that today's large city parks resulted from a noble conservation vision, and that early city leaders had the foresight to preserve large swaths of green space solely for the recreation and enjoyment of urban residents.

But that wasn’t universally the motive, and it certainly wasn’t the case for Fairmount Park, a large urban park along the Schuylkill River in Philadelphia.

Fairmount Park was, rather, the result of a much more critical need: saving lives. 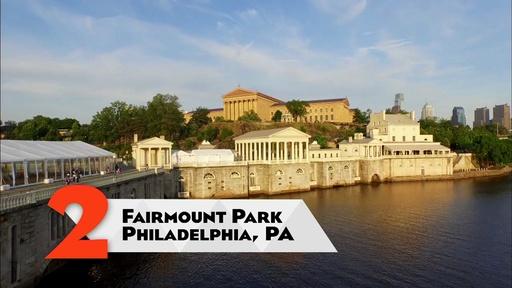 In the 1700s, yellow fever epidemics had claimed the lives of thousands of Philadelphians. One outbreak alone , in 1793, killed more than one-fifth of the city's entire population. Fearing for their survival, nearly half of the city's residents left Philadelphia. Those who remained were afraid to walk in the street; they smoked cigars or chewed garlic in futile efforts to protect themselves.

In the wake of the 1793 epidemic, city leaders scrambled to improve the water infrastructure that they suspected had fostered disease. They installed a pumping station in the center of the city, on the site of today's City Hall. It was the first municipal waterworks in America.

Then, in 1815, they built a waterworks atop a riverfront hill known as Fairmount. As the highest point in the city, the location made sense: water could be pumped from a reservoir through pipes to city neighborhoods.

Once they had created a safe drinking water supply, they focused on an equally challenging task: protecting the Schuylkill River from disease-causing activities along the waterfront. Over the course of several decades, city leaders passed legislation that allowed them to acquire more and more waterfront land, stop further development, and where necessary, force out industry (in some cases razing former industrial sites).

In 1855, Philadelphia opened the properties it had acquired - now named, collectively, Fairmount Park - to the public.

By preserving vital waterfront land for its people, Philadelphia's leaders had both protected public health and created a huge green space and recreational area for the public to enjoy. 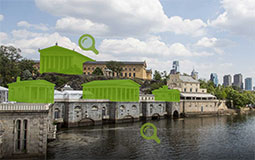