Interstate 5 separated downtown from its adjoining neighborhoods in the 1960s. Photo credit: Museum of History and Industry

Landscape architect Lawrence Halprin chose a Brutalist style that complements the concrete infrastructure; water features and plantings softened the hard edges of all of the concrete. Photo credit: Matt Hagan

Molded concrete forms integrate with the highway infrastructure all around the park. Photo credit: Matt Hagan

A fountain area called “The Canyon” masks noise from the highway below. Photo credit: Matt Hagan

"The Cascades" provides an escape from the urban environment, while seamlessly blending into it. Photo credit: Matt Hagan

Thanks to its innovative design, visitors to Freeway Park can find a peaceful respite atop a busy highway. Photo credit: Matt Hagan

Interstate 5 runs along the entire West Coast of the United States, connecting American cities from Mexico to Canada. When Interstate 5 came through Seattle in the 1960s, it may have connected Seattle to far-flung places, but it divided the city right down the middle, separating downtown from neighborhoods to the east and changing the character of the areas adjacent to the roadway. To put it plainly, the new highway was loud. It was big. And it was ugly. 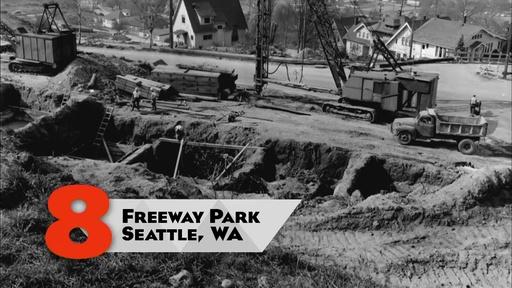 Before I-5 was completed, the community was talking about ways to address the environmental, aesthetic, and urban planning problems it presented. The idea wasn't to completely hide the highway so much as mitigate it, complement it, and weave back together the neighborhoods on either side as much as possible.

Facing a daunting design challenge, landscape architect Lawrence Halprin came up with an approach that established a whole new kind of park: five acres of green and community gathering places, resting on a "lid" over a depressed portion of the highway. 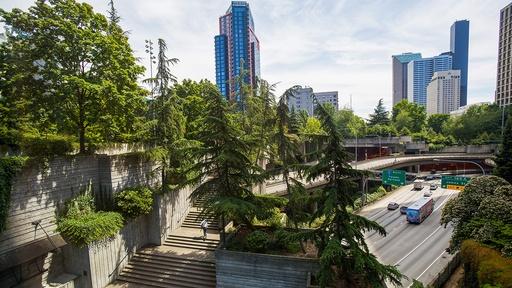 The park is divided into a series of pathways and clearly defined gathering spaces such as "The Canyon" and "The Cascades," fountains where flowing water distracts people from the cars speeding below them. To address the many engineering challenges of building atop a highway, Halprin employed a variety of innovative strategies, including lightweight soils and shallow planting beds.

In keeping with the context of this new kind of park, Halprin applied a Brutalist style, with molded concrete forms echoing the highway infrastructure all around it. Water features and green landscapes add a natural aesthetic with an urban edge.

Freeway Park solved a problem for Seattle and paved the way for other communities to regain ground lost to highways. The "lid" idea has since been replicated or adapted in cities across the country , including a proposed further covering of I-5 in Seattle. 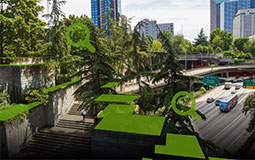