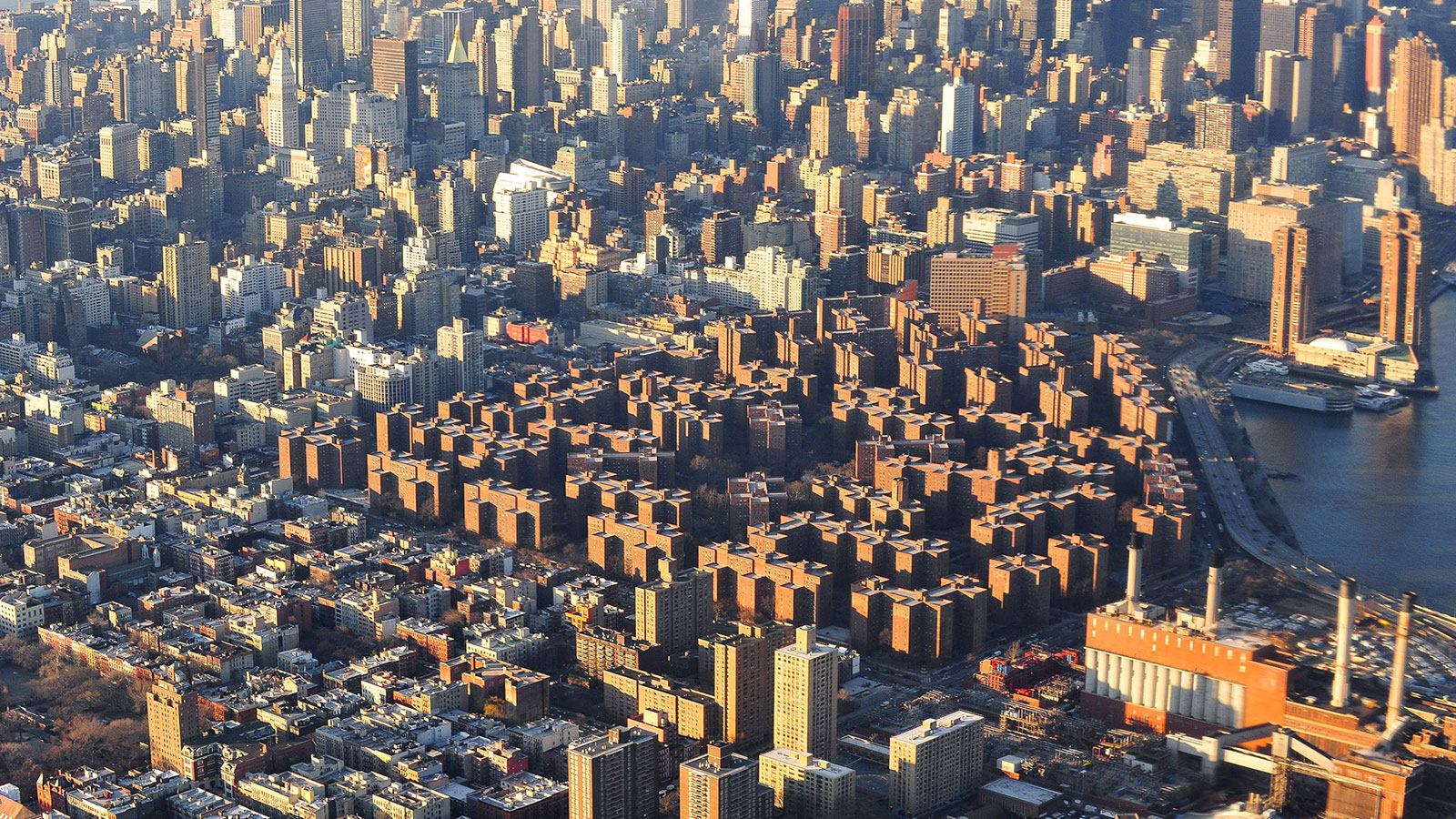 The tower-filled superblocks of Stuyvesant Town and Peter Cooper Village stand out from the rest of Manhattan. Photo credit: Alec Jordan via Wikimedia Commons 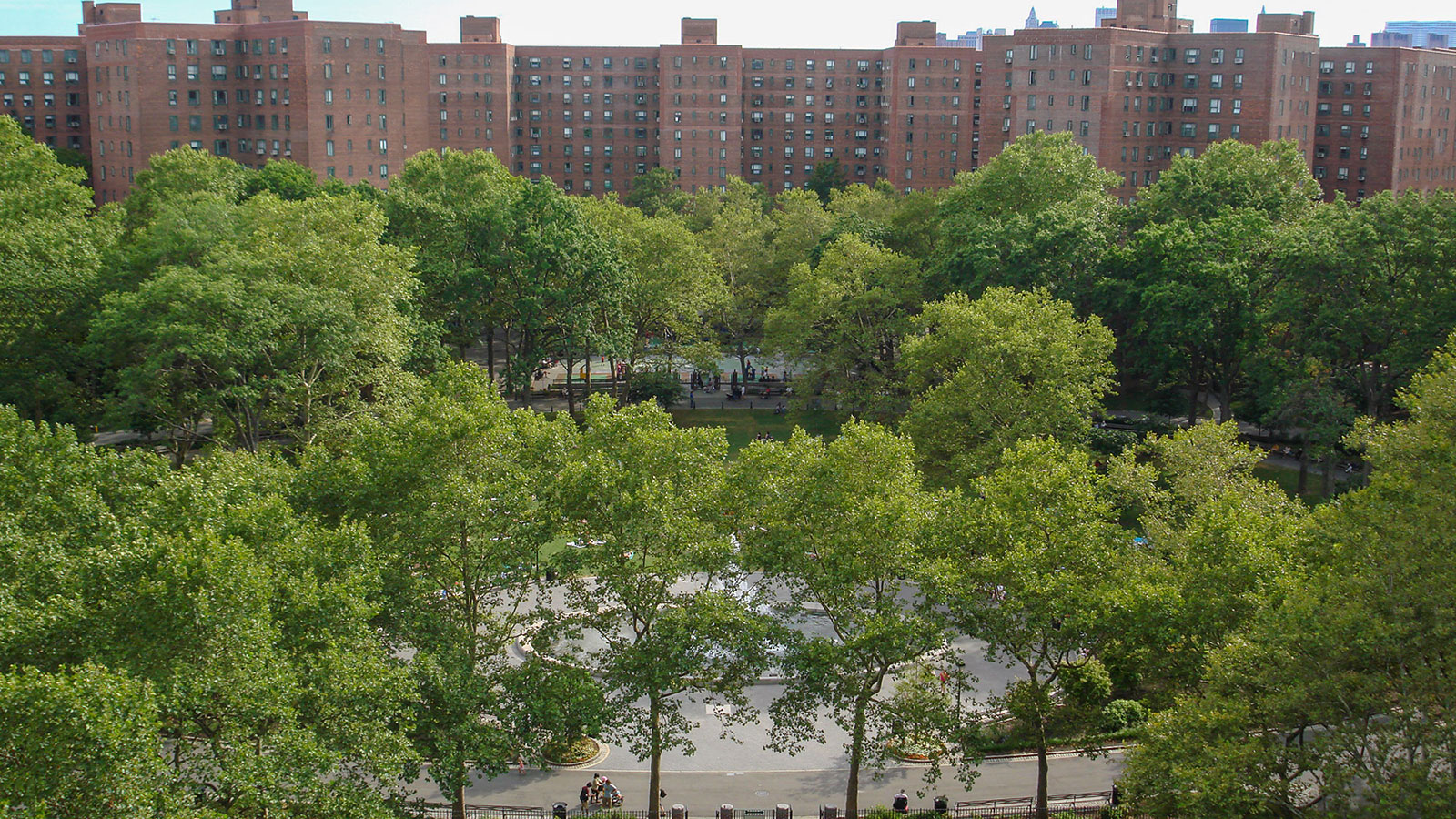 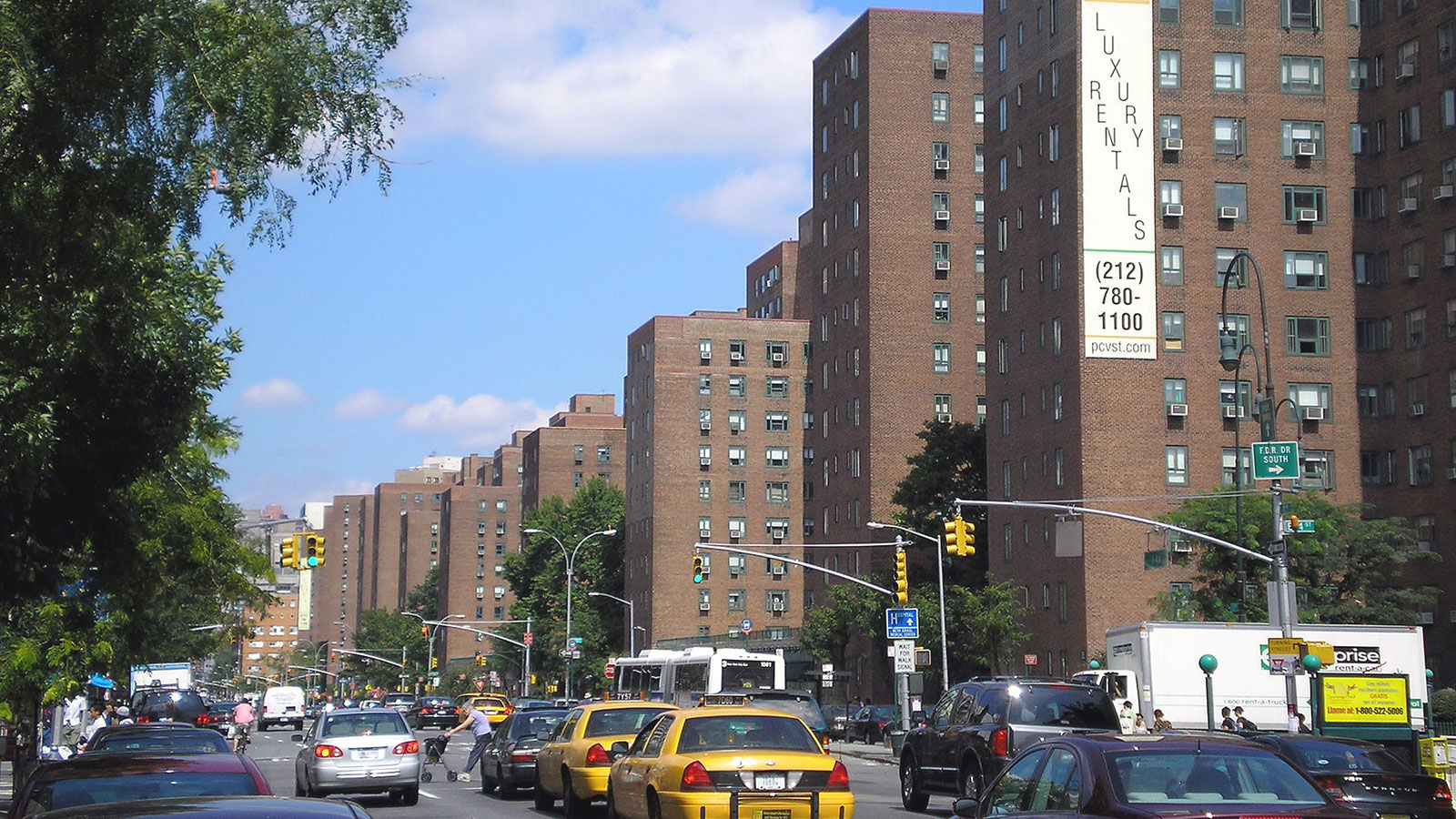 The towers of Stuyvesant Town line up with the street grid to the west, although the grounds are not accessible to the public. Photo credit: David Shankbone via Wikimedia Commons 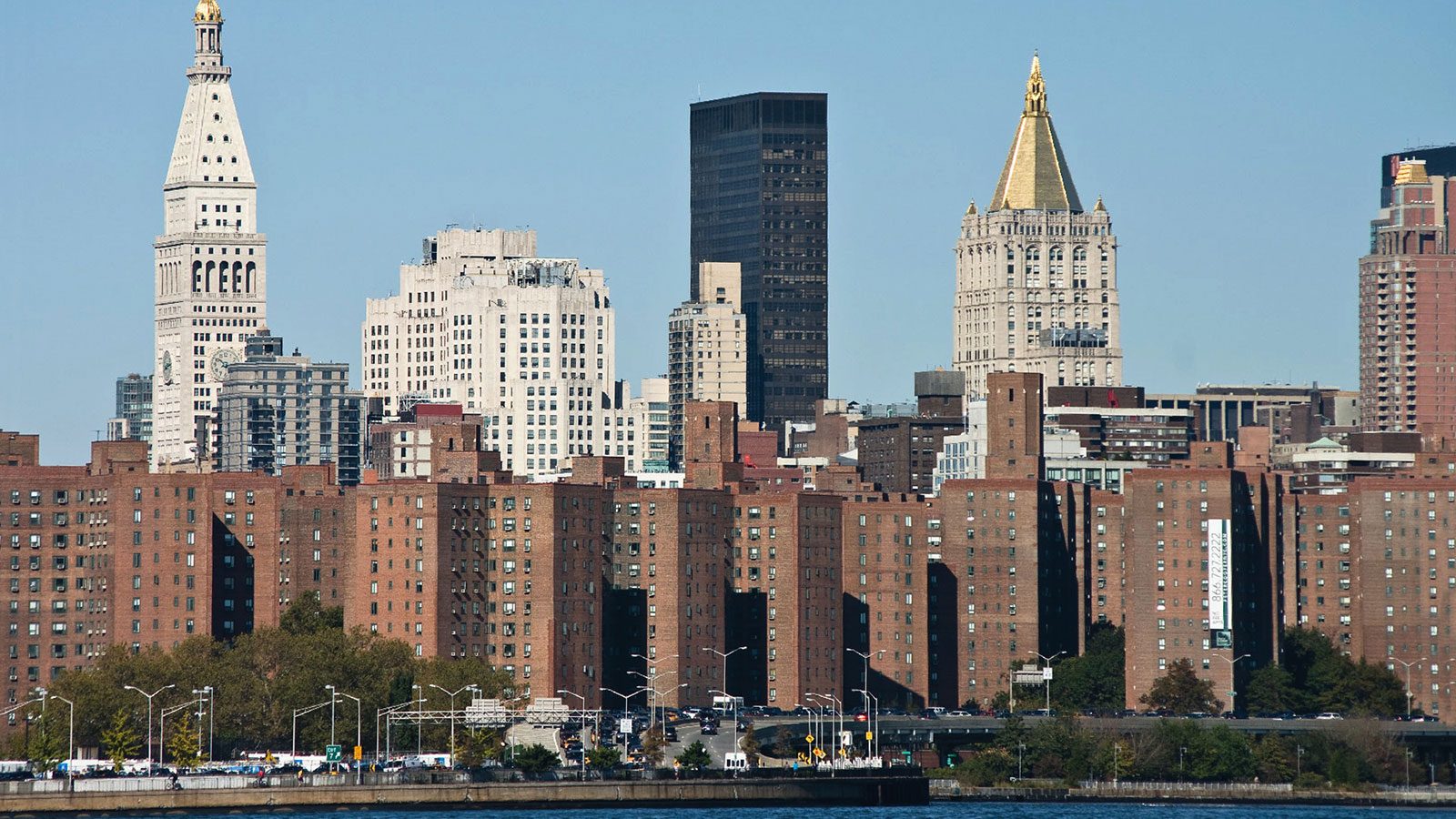 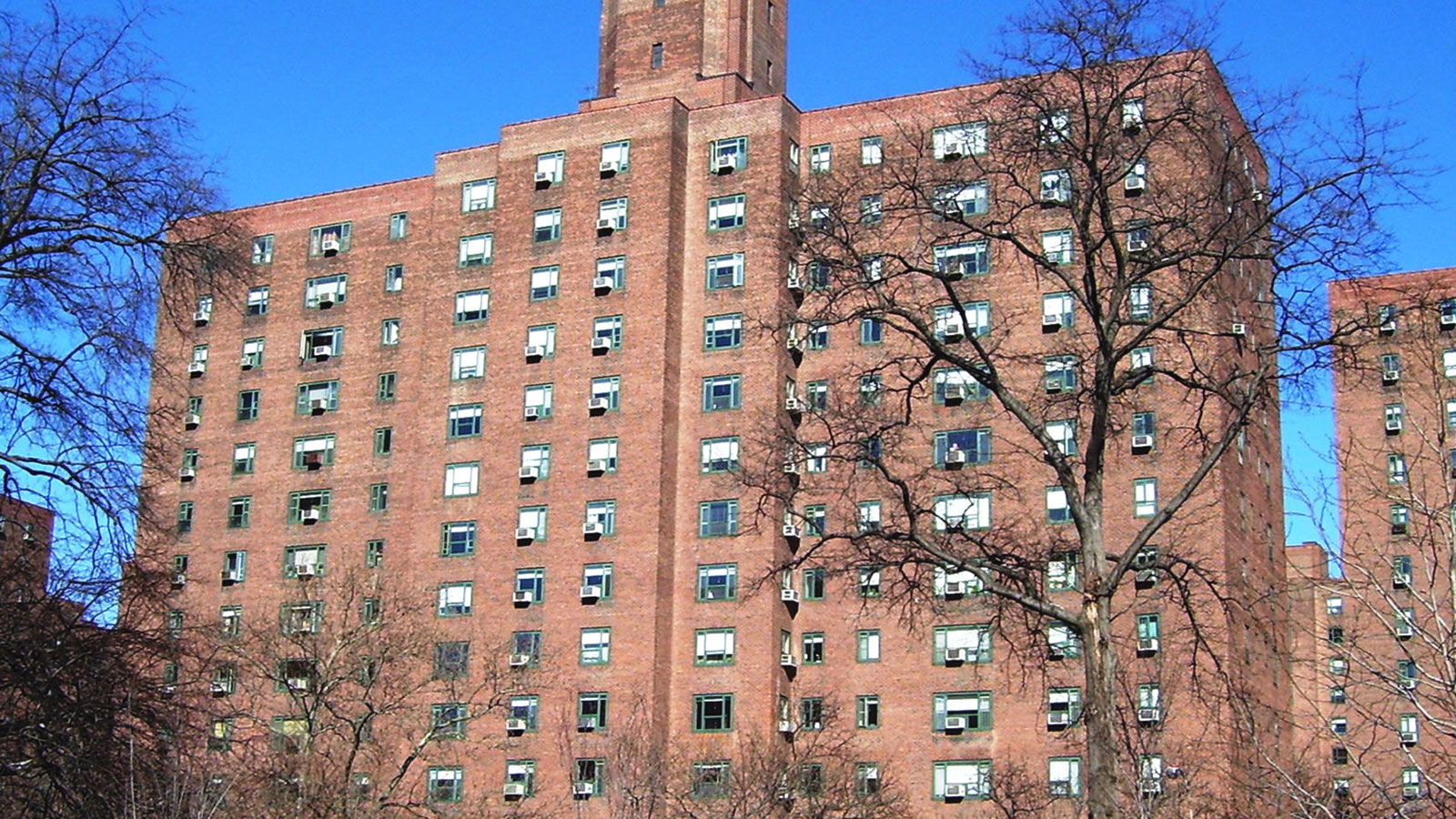 The 21 towers of Peter Cooper Village are each 15 stories tall. Photo credit: Beyond My Ken via Wikimedia Commons

In Manhattan in the twentieth century, some large-scale developments were as big as small-to-medium-sized towns in other parts of America. This was the case with Stuyvesant Town, initiated in 1942 as the largest "superblock" development ever undertaken up to that time.

The design called for the clearing of 72 acres (including approximately 600 existing buildings) in order to create space for an orderly high-rise village for working- and middle-class singles and families.

The resulting development consisted of 235 towers of 12 to 13 stories. A total of 24,000 people would eventually live here, almost two and a half times the pre-clearance population.

The site plan drew heated criticism, because its beautifully landscaped parklands and central oval were private property, and the entire complex was cut off from Manhattan's grid by a walled perimeter. But early residents praised the affordability of the complex and the views from the towers.

In 1947, the same year that Stuyvesant Town opened, the project's developer and architect opened a sister project immediately to the north. Rents at Stuyvesant Town had been kept affordable thanks to government incentives, but the adjacent Peter Cooper Village was designed to appeal to residents with more means. To separate it from the original development, the 21 towers were taller and were set on a diagonal to the surrounding street grid.

Stuyvesant Town and Peter Cooper Village again made history in 2010 when new owners defaulted, turning a record-breaking real estate deal (with a $5.4 billion price tag) into the country's largest default of a commercial mortgage.