The wing-like roof is a catenary curve that requires no interior supporting columns, opening up the interior space for passengers. Photo Credit: Antony Platt

Another expression of Saarinen’s curvaceous brand of modernism: his Gateway Arch in St. Louis, Missouri, designed in 1947 and completed in 1965

What should an airport look like? Can good design make a traveler’s experience better? These were questions facing Eero Saarinen when he received the commission for a new airport west of Washington, D.C. in 1958. 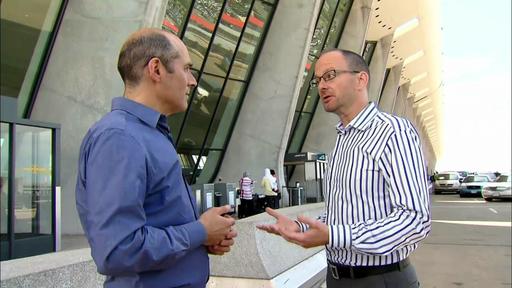 Air travel was exploding as a modern and glamorous form of transportation, and the dawning age of commercial jet travel called for a new approach to airport design.

Saarinen had already been recognized for his theatrical, expressive approach to modernism. His designs for the St. Louis Gateway Arch and for the TWA terminal at JFK Airport demonstrated his sculptural, curvaceous take on modernism – departing from the stark, even foreboding, rectilinear forms of other modernists.

For the Dulles project, Saarinen studied airports across the country and came up with a terminal design that expresses ideas of flight and movement in its simple, wing-like form. His monumental, yet minimalist, terminal – constructed of glass, steel, and concrete, with a catenary curve roof supported by cables – still provides an open, airy, and modern environment for today’s travelers. 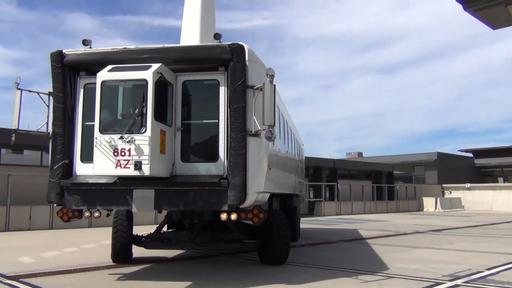 One of the modern innovations Eero Saarinen incorporated at Dulles Airport was the use of “mobile lounges” to transport passengers to airplanes. Geoffrey Baer caught up with one of the mobile lounge drivers to find out more. Watch the story.

Saarinen’s design also incorporated other innovations, most notably mobile passenger lounges the size of city buses that transport travelers to their airplanes (now largely displaced by a faster underground train).

Construction of the airport began in 1958, but Saarinen did not live to see its completion in 1962. He died of a brain tumor at age 51 in 1961. But his design for Dulles influenced a mid-century wave of sensual, expressive modern forms.

U.S. Capitol
Take a guided tour of the U.S. Capitol, whose neoclassical architecture was championed by Thomas Jefferson.

Kogod Courtyard
For a view of another interesting modern structure in D.C., visit the Kogod Courtyard at the National Portrait Gallery. 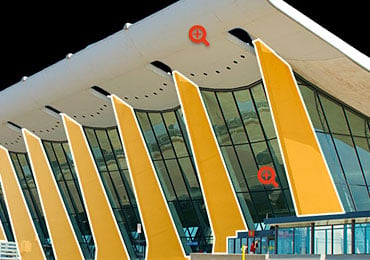