A rather confined entry and stairway leads visitors to a surprising and dramatically open interior. Photo Credit: Kelly Manteck

The interior opens into a large, continuous, less formal open-plan living space unlike anything in homes of the day. Photo Credit: Kelly Manteck

Rather than divide functional areas with doors and walls, Wright used simple screens and built-in furniture to create a free and flowing sense of space. Photo Credit: Kelly Manteck

Wright was known for his unified attention to a building’s detail, including fixtures, decorations, and furniture that all coordinated with the overall design scheme. Photo Credit: Kelly Manteck

A sense of drama and procession continues throughout the living space. Photo Credit: Kelly Manteck

The Robie family at the building site during construction of their new home. Photo Credit: Chicago History Museum 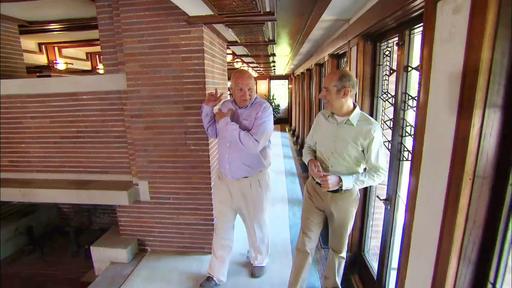 But at the close of the century, a young architect named Frank Lloyd Wright, heavily influenced by his mentor Louis Sullivan, developed a very different vision: something sleeker, more open and flowing, more free, and more distinctly American.

With the Frederick C. Robie House, he broke down old barriers, creating a residential design with a horizontal roofline, large overhanging eaves, continuous ribbons of windows, and a wide-open living space at its center. 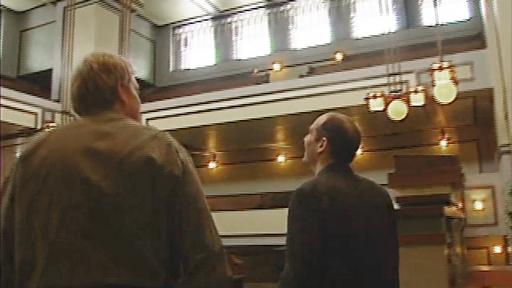 Just outside of Chicago, Illinois, the suburb of Oak Park is home to the world's largest collection of buildings designed by Frank Lloyd Wright. Geoffrey Baer takes us on a tour of Wright's early homes, as well as Wright's famous Unity Temple. Watch the story.

This radical approach to home design not only provided a new look; it brought to families like the Robies a more flexible, informal lifestyle.

No humble soul, Frank Lloyd Wright himself called his design for Robie House “a source of world-wide architectural inspiration.”

Wright’s ideas influenced American architecture for decades to come. From the ranch-style homes that spread across the American landscape to today’s suburban great rooms, millions of American homes can trace their ancestry back to Wright’s Prairie homes, of which Robie House is a notable example.

Oak Park, Illinois (15 miles from the Robie House)
The Frank Lloyd Wright Home and Studio in Oak Park, Illinois was Wright’s personal residence and office from 1889-1909. While the home’s peaked rooflines predate the horizontal planes of Wright’s famous prairie style, it was here that he began to germinate his big ideas about a new American architecture.

Oak Park also has the world’s largest collection of buildings designed by Wright, many of which you can view on guided or self-guided tours.

The Rookery (8 miles from the Robie House)
Although the building itself was designed by another architect, Frank Lloyd Wright made a unique contribution to the design of the Rookery, a stunning 1888 building in Chicago’s Loop: he remodeled the building’s central light court in the lobby in 1905. A Frank Lloyd Wright bookshop is located in the lobby. 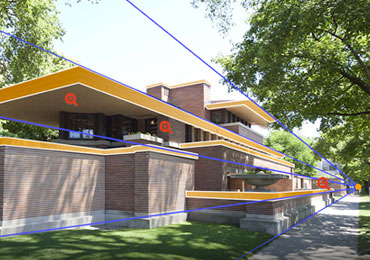 The Robie House redefined the American home, inside and out. Click through to learn more.