When the Seagram Building was constructed in 1958, its sleek minimalism was a radically modern statement. Photo Credit: Peter Reitzfeld

While the building visually celebrated its structure, the I-beams on the exterior were in reality strictly decorative. The building’s actual supporting structure is hidden behind the bronze façade. Photo Credit: Peter Reitzfeld

The building’s open plaza concept would be widely repeated, though not always with the same level of success. Photo Credit: Chicago History Museum

In the interior finish, Mies’s idea that “God is in the details” is apparent. Photo Credit: Peter Reitzfeld

The choice of Mies van der Rohe as architect for the Seagram Building was heavily influenced by the 27-year-old daughter of Samuel Bronfman, the Seagram Company president. Phyllis Lambert, then an art student, dissuaded her father from constructing the more prosaic design that had originally been commissioned. Photo Credit: CCA

German-born architect Ludwig Mies van der Rohe was an early director of the Bauhaus in Berlin, a school where the earliest modernist principles of architecture blossomed – that is, until the Nazis shut it down in 1933. Mies came to the U.S. in the late 1930s and brought with him some powerful, even radical, new ideas about architecture. 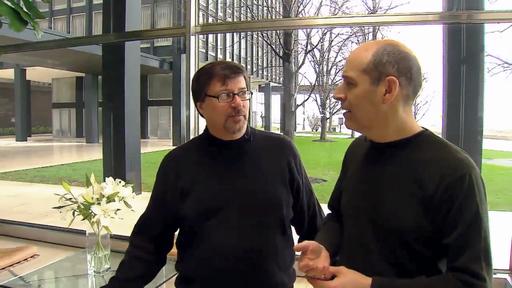 Mies believed that “less is more” and that “God is in the details.” Both of these tenets are in evidence (and occasionally in contradiction) in his sleek, modern Seagram Building – an avant-garde statement when it was completed in 1958.

Flaunting its glass and metal, and foregoing the heavy stone and brick used in ornamental facades of previous decades, the Seagram Building helped usher in a new era of simple, straightforward skyscrapers – buildings that embraced and celebrated their structures and minimalist geometries, rather than camouflaging them with superfluous ornament and detail.

But the Seagram Building is not without its inconsistencies. While modernist ideals elevated the concept of functionality, the building’s bronze exterior façade prominently features non-structural bronze I-beams – visually suggesting the building’s structure – while in fact being completely non-functional. The building’s actual supports lie hidden within the bronze and glass façade. Inside, the building was luxurious in its use of bronze, travertine, and marble which create an opulent, if sleekly minimalist, interior aesthetic. 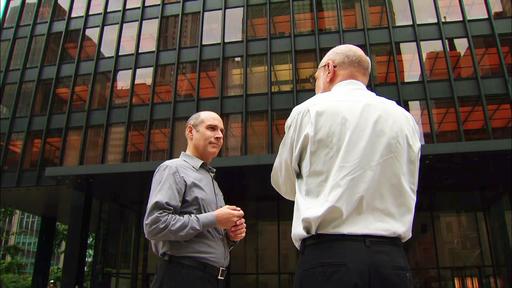 New York's Seagram Building is one of Mies Van Der Rohe's most famous towers. But years earlier in Chicago, he startled the world with his glass and steel apartment buildings on Lake Shore Drive. Watch the story.

While the building itself stands as an icon of modernism, the empty space in front of the building was also innovative. An open, urban plaza set the building back from Park Avenue and created a gracious pedestrian space. Often emulated, such plazas have become a cliché, but, at the time, Mies was making a bold statement.

It’s a testament to just how influential the Seagram Building has been that its minimalism now seems commonplace. But at the time it was built, the Seagram was an early and radical statement that the new, modern era in American architecture had arrived.

Lever House
Check out the Lever House, another notable modernist building across the street from the Seagram Building at 390 Park Avenue, designed by Gordon Bunshaft of Skidmore, Owings and Merrill. A contemporary art gallery, open to the public, is housed on the lobby level. 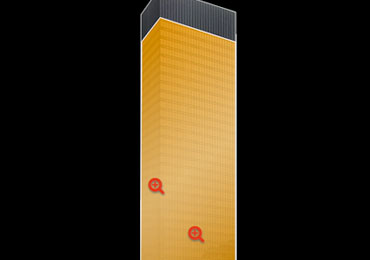