Hoping to recreate the energy of Viennese streets and plazas, architect Gruen designed large interior spaces as a place for interaction. Natural light flowed from windows that he strategically placed high on the walls to avoid distractions. Photo Credit: Rory Thomas O’Neill

A sculpture by prominent mid-century artist Harry Bertoia was just one of the pieces of public art designed for Gruen’s "Garden Court of Perpetual Spring." Photo Credit: Rory Thomas O’Neill

While the wide-open, multi-story interior space seems conventional to the modern eye, it was truly radical at the time. Photo Credit: Rory Thomas O’Neill

Gruen envisioned a lively place of interaction and engagement, but in fact he set the stage for decades of shopping islands, isolated in seas of parking. Photo Credit: Rory Thomas O’Neill.

Later additions to Southdale Center demonstrate updated attitudes about stores opening only onto an interior space; instead, they turn to engage the outside world. Photo Credit: Rory Thomas O’Neill 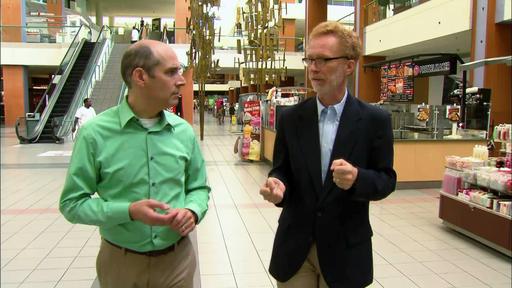 Later, working in the U.S. after World War II, he was troubled by suburban sprawl and the social isolation it created. In his own words, he wanted to liberate American cities from “the terror of the automobile.” He envisioned “livable” and “lovable” spaces that got people out of their cars and interacting with each other.

With the commission from the owners of Dayton Department Stores for the Southdale Center in Edina, Minnesota, he got his chance. He turned the standard street-facing strip center inside-out and, in the process, introduced the formula for the first regional indoor shopping mall.

Beyond its collection of shops, Southdale Center provided a light-filled interior that he called the “Garden Court of Perpetual Spring” – a large open space with a goldfish pond and bird aviary, sculptures, and a sidewalk café. More than 75,000 people attended the grand opening. 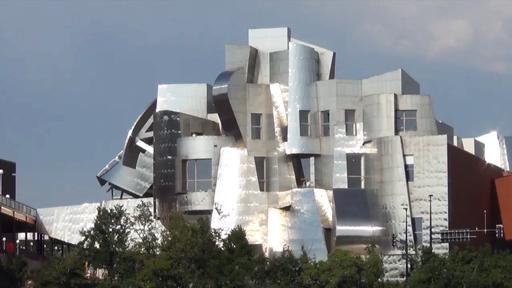 While Southdale Center was designed to bring vitality and social interaction to the suburbs, its influence ultimately contributed to suburban sprawl and urban decline as shopping malls displaced urban retail stores. But in Minneapolis, the urban core has been revived in recent years. Join Geoffrey Baer on a bicycle tour of the Riverfront District. Watch the story.

Gruen envisioned shopping centers such as Southdale as the core of more vibrant suburban communities, with houses, apartments, schools, and offices surrounding the mall. But it was not to be.

What Gruen didn’t anticipate was that far from bringing the cosmopolitan energy of the urban plaza to the suburbs, his innovation – and the many copycats it inspired – encouraged the very kind of sprawl he sought to mitigate. Even Frank Lloyd Wright later weighed in: he said Gruen “should have left downtown, downtown.”

Gruen returned to Austria and spent his last years in Vienna. But his Southdale Center continued to influence decades of suburban shopping malls, building momentum for suburban sprawl.

The pedestrian shopping districts of Vienna

Minneapolis Riverfront
Victor Gruen was focused on bringing vitality to suburbia, but he unwittingly helped to hasten urban decline. Today, many urban areas are seeing restoration and renewed vitality. In Minneapolis’s Riverfront District, you can see a variety of restored architectural gems, as well as newer landmarks by noted architects, including Frank Gehry and Herzog & de Meuron. 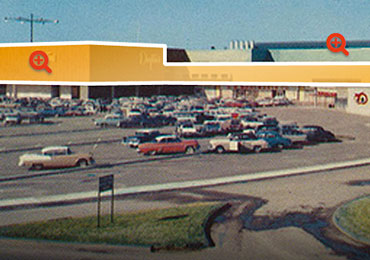 Southdale Center introduced the formula for the regional indoor shopping mall. Click through to learn more.