Trinity Church sits across the street from – and is dramatically reflected in – another iconic building: the John Hancock Tower, a 1972 modernist glass skyscraper by I. M. Pei & Partners. Photo Credit: Katherine Castro

The building is so heavy that it had to be supported on massive granite footings, which are in turn held up by 4,500 wooden pilings driven deep into the earth. Photo Credit: Katherine Castro

The church interior was designed in a cross-shaped form to bring worshipers as close to the pulpit as possible. Photo Credit: Katherine Castro

Paintings, sculpture, and stained glass by leading artists of the day were conceived together with the church’s architecture as a cohesive whole. Photo Credit: Katherine Castro

After the Civil War, America was ready to rebuild, put down roots, and establish a more solid and permanent built environment. But from an architectural perspective, the American landscape had so far been composed for the most part of copies of Old World forms: colonial Georgian churches, neoclassical public buildings, and Victorian homes. 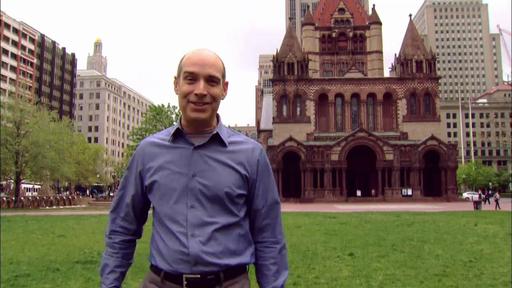 Onto this stage stepped Henry Hobson Richardson, an American architect who had trained in Paris at the Écoles des Beaux-Arts. Richardson would become the first “starchitect” of his time, known for reinterpreting European forms and styles, especially the medieval Romanesque buildings of France, Spain, and Italy.

For Trinity Church in Boston, Richardson infused the Romanesque tradition with fresh ideas to create something new and distinctly American: Richardsonian Romanesque architecture. 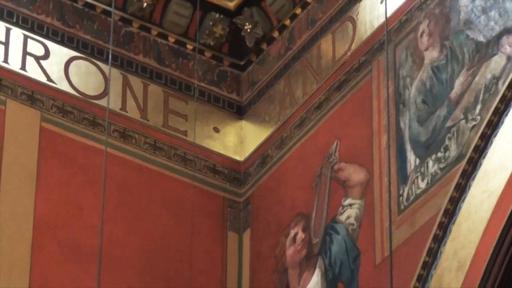 When Trinity Church was being restored in 2004, the restoration team found something very interesting behind a painted panel high above the sanctuary. Geoffrey Baer caught up with restoration architect Jean Carroon to get the story. Watch here.

With its heavy walls of rough-faced stone, rounded arches, and massive towers, Trinity Church heralded a muscular and bold new style. Inside, an innovative open-format layout, together with stunning murals and stained glass windows overseen by (and in several cases created by) artist John LaFarge, further sealed Trinity Church’s status as an American masterpiece.

Boston Public Library
Just across Copley Square from Trinity Church sits another very notable structure: the 1895 Boston Public Library building, designed by Charles Follen McKim to be a “palace for the people.” Check out Bates Hall, a gorgeous and iconic reading room in the tradition of great European bibliothèques; the Abbey Room, with its murals depicting Arthurian legends; and extensive third-floor murals by American painter John Singer Sargent. A 1972 addition to the library was designed by Philip Johnson.

The Freedom Trail
Trinity Church sits near some of the most significant sites in America’s early history. To learn more, walk the Freedom Trail, a 2.5-mile route covering 16 sites related to the American Revolution. The self-guided walk (delineated by a red brick or painted line along the sidewalk) takes two to three hours; guided tours are also available. 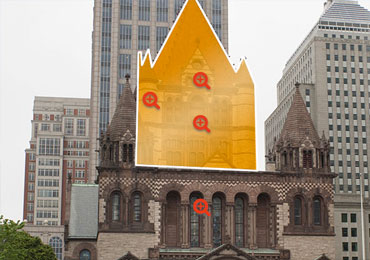