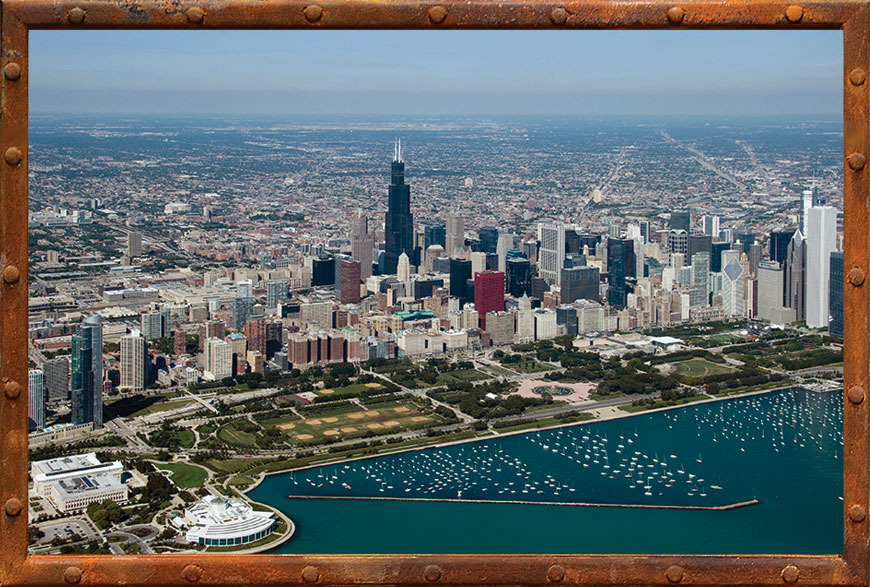 Grant Park is Chicago’s front yard, its playground, its cultural pride and joy – and underneath it all is a vast field of charred rubble from the Great Fire of 1871. Photo Credit: Lawrence Okrent 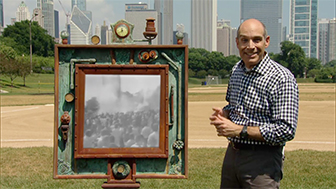 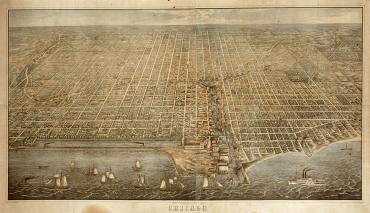 This 1857 bird’s-eye view of Chicago shows that the area where Grant Park now sits was then completely under water. An Illinois Central Railroad trestle acted as a breakwater. Photo Credit: Chicago History Museum 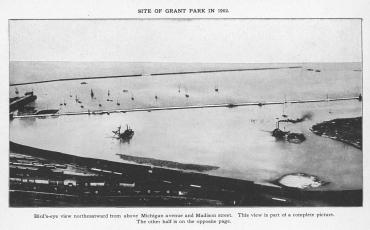 In 1902, the Great Fire landfill extended only partway into the lake. Daniel Burnham’s Plan of Chicago would not be published until 1909.Photo Credit: Chicago Park District

Read about the history of Grant Park.

Learn about the history of the construction of the Field Museum.

Read about the 1910 Aviation Meets, the precursor to the modern air show.

Read about the 1968 Democratic National Convention.

Today Grant Park is Chicago’s grand front yard, providing both green space and a home for multiple cultural institutions between Michigan Avenue and Lake Michigan, from Roosevelt Road on the south to Randolph Street on the north. But when Chicago was founded, most of the 319 acres that Grant Park sits on were under water. The landfill that made the park possible was created in the wake of the Great Fire of 1871, when the vast rubble of Chicago’s burned buildings was dumped into the lake east of Michigan Avenue.

In the decades since, Grant Park has grown up on the site, and it has witnessed many fascinating scenes in Chicago’s – and our nation’s – history.

Here are just a few things that happened near the south end of the park:

In 1911, airplanes were still a very new phenomenon. So when an exhibition of aviators came through Chicago, careering around the lakefront in their newfangled machines, it was a very big deal indeed.

The Chicago International Aviation Meet, organized in part by the Wright Brothers, was part of a traveling show that had Americans from coast to coast flocking to makeshift airfields. More than 600,000 people came out to Grant Park, which served as a temporary airfield.

But these flying machines were still fragile contraptions, and it was quite a dangerous business. Two pilots died in Chicago that year. Six of nine pilots on the Wright Brothers team had been killed by the end of 1911, and the Wright Brothers disbanded the team and withdrew from the exhibitions. 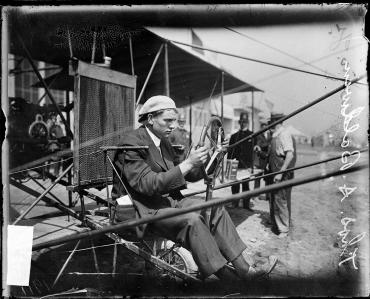 Thomas Baldwin was one of the daredevil aviators who thrilled crowds at the Chicago International Aviation Meet in south Grant Park in August 1911. Photo Credit: Chicago History Museum

At the height of the Great Depression, Chicagoans began attending free concerts in a new Grant Park facility: the Petrillo Music Shell, located in Hutchinson Field and modeled after the original Hollywood Bowl.

It was a classic Chicago two-fer: a cultural asset that also could deliver a few jobs. It is named for James Petrillo, who then served as both commissioner of the Chicago Park District and as president of the Chicago Federation of Musicians.

Concerts were held here until 1976, when a new Petrillo Music Shell was constructed in the north end of the park in Butler Field. 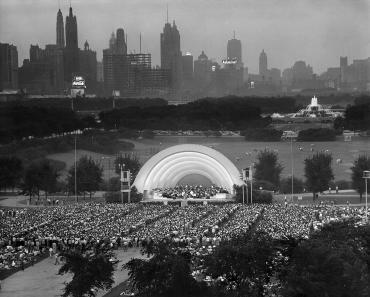 The Petrillo Band Shell, originally located at the south end of Grant Park in Hutchinson Field, opened in 1935. It was modeled after the original Hollywood Bowl. Photo Credit: Chicago Park District 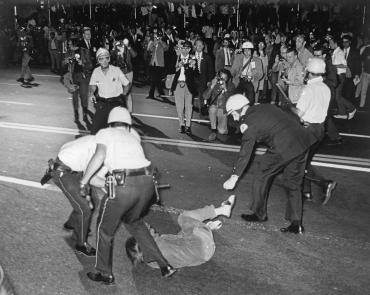 In 1968, Grant Park was the setting for a violent showdown between Vietnam War protestors and police at the Democratic National Convention. The police reaction was widely seen as overly violent. Photo Credit: Chicago Park District

Mayor Richard J. Daley knew that anti-Vietnam War protestors would be coming to make their case at the Democratic National Convention in 1968.

Daley staffed the streets as if for a war: 11,900 Chicago police, 7,500 U.S. Army troops, and 7,500 Illinois National Guardsmen were standing at the ready. The Guardsmen had orders to “shoot to kill” if disturbances got out of hand.

In the area of Grant Park near the Conrad Hilton hotel, protestors and police clashed violently as police helicopters hovered overhead. The tear gas was so thick that it seeped into hotel windows. The term “police riot” was coined in the wake of the melee to describe the disproportionate, and in some cases brutal, police response to the crowd. The whole world was watching.

On an unseasonably warm November evening in 2008, people crowded into and lined up around Grant Park, hoping for a chance to hear what they hoped would be Barack Obama’s victory speech.

The hometown crowd clearly had a favorite; they checked election results on smartphones, reporting state-by-state results as they rolled in, and sharing updates from car windows to those waiting in line.

The atmosphere was buoyant; it soon turned jubilant. Before the night was over, history was made – and Grant Park gained yet another milestone and memory. 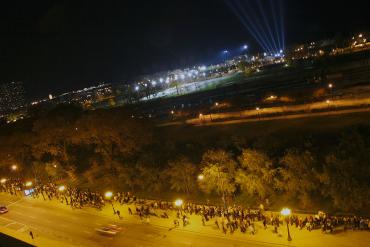 On election night 2008, the line of people hoping to enter Hutchinson Field to hear Barack Obama’s speech stretched all the way down Michigan Avenue to Roosevelt Road. As they waited, Obama’s Electoral College results came in, state by state, and cheers rang up from the crowd. Photo Credit: Alan Brunettin 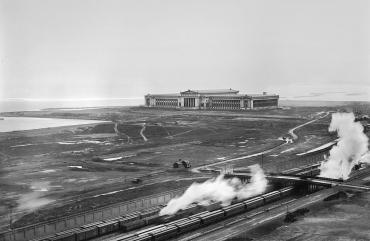 1920: The newly constructed Field Museum sits at the south end of Grant Park. It had been planned for the center of the park, but legal challenges required that another location be found. Photo Credit: Chicago Park District 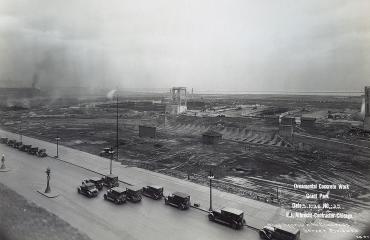 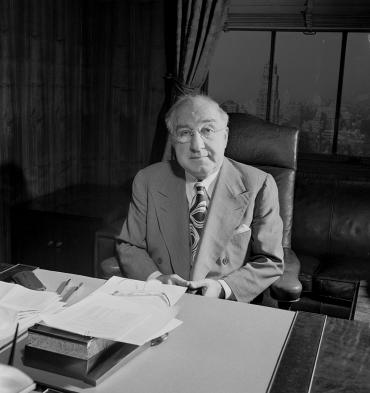 The band shell is named for James Petrillo, who served as commissioner of the Chicago Park District and as president of the Chicago Federation of Musicians. The band shell served the dual purpose of providing free public entertainment during the Great Depression and putting some musicians to work.Photo Credit: Library of Congress 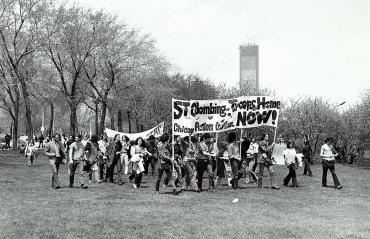 Mayor Richard J. Daley had more than 26,000 police officers, U.S. Army troops, and Illinois National Guardsmen on the streets of Chicago. But the protestors were fewer in number than anticipated, in part because of the “shoot to kill” orders that had been issued. As Chicago Daily News columnist Mike Royko observed, “Never before had so many feared so much from so few.”Photo Credit: Chicago Park District