We never set out to make a quiz show.

WTTW’s program director Lisa Tipton approached me in March or April to brainstorm a new idea for this year’s “Geoffrey” show. I usually debut a new “Chicago tour” show each year in December (just in time for the membership drive, in case you haven’t noticed).

This year we had a problem. My schedule called for me to be out of town a lot shooting a new PBS special. So there wasn’t the usual amount of time to research, write, shoot, and edit one of my tour shows. So what could be done quickly? 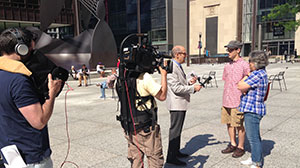 Producer Eddie Griffin and cameraman Tom Siegel keep an eye on Geoffrey Baer as he quizzes a mother and son team.

I got to thinking about something that has become very popular in my public speaking engagements over the years. I try to make my talks interactive and fun by quizzing the audience about Chicago history and trivia. The questions are drawn from the twenty-plus shows I’ve made over the last twenty-plus years.

What if we did that on TV? We could pose questions to our TV viewers and then give the answers by showing clips from our past shows.

At first I just imagined that the “contestants” would be the audience at home and I would pose the questions by speaking directly to the camera. 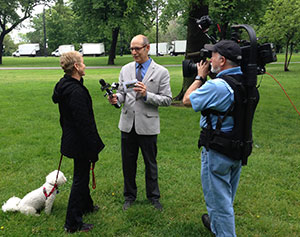 You can’t even walk your dog in Lincoln Park without being asked to play Where in Chicago?.

But Lisa thought it would be much more fun to have actual contestants on camera. OK… so how to do that with so little time to shoot?

Well, since the special was scheduled to air during this year’s winter membership drive, we first thought that maybe we could turn the breaks you see as a viewer between programming into quiz segments. I would ask my co-hosts during those breaks the questions. Or maybe I could pose multiple choice questions to the phone volunteers in the studio and get them to vote on the answers with a show of hands. Then we’d roll clips of past shows to give the answers.

But Lisa really had her doubts about this concept. She thought the best plan was to hit the streets to quiz everyday Chicagoans. And to his enormous credit, our Chief TV Content Officer Dan Soles encouraged us to go for it.

So somehow we were now talking about making a special after all, even though we didn’t really have the time … and I had to take a crash course in being a quiz show host!

What kind of quiz show host would I be?

To give me some inspiration Lisa sent me a link to a truly wild, crazy man-on-the-street “quiz” called “Billy on the Street.” (CAUTION… the host is manic and lewd and crude).

Of course Lisa and I both understood that our special would be much more family-friendly and good natured. But I have to say, Billy’s intense contestant-focused shtick was inspiring and, when I wasn’t deeply offended, I was laughing out loud. 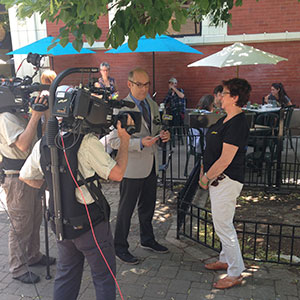 We definitely did not want our show to be like Jay Leno’s “Jaywalking” segment in which he clearly made his victims look foolish.

But what we did take from Billy and from Jay was a sense of fun.

We also really loved “How the States Got Their Shapes” – which is a fun way of learning as you play along with contestants on the street.

As we moved quickly ahead, I politely pointed out that we needed a producer on the project. Our very own Eddie Griffin who works in the broadcasting department and served as producer of the WTTW comedy series, The Chicago Stand-Up Project was the choice and we were off. (Eddie is also an avid bar trivia player.)

Eddie, Lisa, and I looked over the questions I’ve been using in my speaking engagements and immediately realized that I would have to write a lot more if we were going to fill 75 minutes of time. So I went back through years’ worth of scripts and drafted dozens of questions. Eddie and Lisa were tough critics and together we honed it all down to a final list. 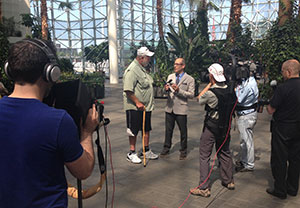 It was too hot to be outside at Navy Pier, so the crew (Eddie Griffin, Dave Moyer, and Tom Siegel) quizzed contestants in the Crystal Gardens.

We wisely decided we should practice this before going out on the street, so we enlisted some willing volunteers from WTTW’s staff ranks, and held a mock quiz in a conference room. I used a lint roller as a microphone.

That’s when we all discovered something. This was going to be FUNNY. A little-known fact about me is that I come from a theatre background. I trained at Second City and taught improv for many years. In that rehearsal, it all came back to me. And the people I was quizzing joined right in.

This was the “aha” moment when Eddie started envisioning how this would actually look to an audience. I had imagined quizzing one contestant at a time. But Eddie had the idea to film me asking multiple contestants the same questions and cut them all together into one montage. WOW!

Of course to make this work we would need to shoot the quiz segments with more than one camera. Yeah… this was becoming more and more of a production. Director of photography Tom Siegel and cameramen Dave Moyer and Tim Boyd artfully stepped into the project.

I really wanted the show to have a ’70s-era “game show” look and this called for just the right logo. Our amazing art director Linda Fox – right before our eyes and with our back seat art direction – worked on this “Where in Chicago” logo you see here. Then we had a “mic flag” made so that it could be attached to the microphone.

Although I had imagined the game show graphics, I hadn’t been thinking about extending the game show look to my wardrobe. I thought I’d wear casual clothes as I usually do. Shirt or sweater, not coat and tie. Once again Lisa and Eddie got together for an intervention. Of course I should wear a coat and tie, they insisted. And a pocket square to boot. Of course they were totally right.

After all of this preparation, it was time to hit the streets. We had only seven days to shoot everything, and we tried to get to two or even three locations on some days. 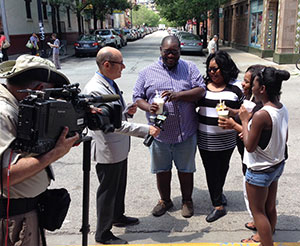 The Haynes family preps for their quiz with bubble tea.

Recruiting “contestants” proved to be a challenge. Ahead of time, we arranged a very small number of “ringers” to get things going – mostly personal friends we asked to meet us at various locations. But for the most part we just set up our cameras on the street and hoped we’d find folks who were game to play our game. We would scan the faces of passers-by looking for some sort of intangible quality that might suggest they’d be funny (and willing!) participants. These qualities were actually more important to us than Chicago knowledge, since right or wrong the answers might be funny and in the end we’d reveal the true answers anyway.

Sometimes people just walked right up and asked what we were doing. Those were the easy ones to recruit. But a lot of the time it felt like we were cruising at a singles bar. And on busy days, especially in the Loop, most people had their guard up, assuming we were selling something or asking them to sign a petition.

Despite the obstacles, we found a remarkable number of really funny, lively, good sports. They gave Eddie and editor Paul Thornton a ton of great raw material to choose from when piecing together the final product. And on top of that, it turns out when you stop random passers-by in Chicago, you have a remarkably high probability of finding people who know a lot about the history of their city!

I hope you enjoy our new special, Where in Chicago?! 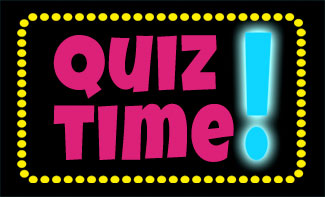 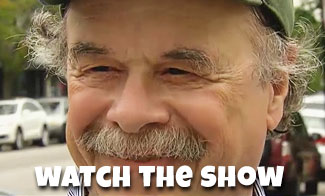 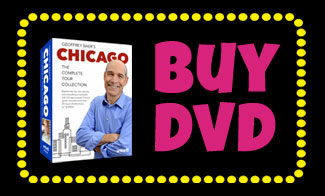 View all Where in Chicago Sponsors >