The Good Stuff is a show featuring videos on a variety of different themes. The stories are sometimes fictional, sometimes educational, and some are documentary in style. Join host and YouTube sensation Craig Benzine, a.k.a. Wheezy Waiter, as he scours the depths of the universe and the inner recesses of the mind in a never-ending quest for the good stuff and enjoy the themes coming up this year. The Good Stuff is produced by Craig Benzine, Ryan Wolff, Matt Weber, David Wolff, and Sam Grant. 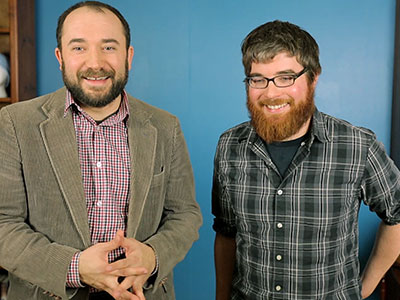 Even though we spend a third of our lives asleep, there is still a lot to learn about this mysterious and essential aspect of our existence. Craig Benzine and company delve into the science of sleep, dreams, and try to find the secret to a good night’s rest!

Why Do We Sleep?

Why Do We Dream?

How to Sleep Better!

From ancient mythology to artificial intelligence, robots have captured the imagination for centuries and now they are increasingly becoming an integral part of our daily lives. Craig and company take a look at their origins, their future, and whether or not we have anything to fear from these astonishing machines.

A History of Robots

Innovative Robots That Will Make Our Lives Better

Will Machines Take Over the World?

Are We Becoming Robots?

On a quest that takes them from “The UFO Capital of the World” to a magician who uses the tricks of his trade to expose deception, Craig and company test the limits of what we can understand and question the very nature of reality.

James Randi vs. The Supernatural

What Are The Limits Of Your Perception?

Are We Alone in the Universe?

Is the Universe a Hologram?

The Future of Food

In order to deal with the adverse effects of climate change and a growing population, the world will not only have to rethink how it feeds itself, but what it will eat. Craig and company taste test a future that includes stir fried bugs, plant-based meat indistinguishable from the real thing, and farms that go vertical!

Can We Make Meat Out of Plants?

Why You Should Eat Bugs

Are Vertical Farms the Future of Agriculture?

Why We Should Be Urban Farming

With the helpful guidance of a roller coaster enthusiast, Craig and company try to get their adrenaline fix by exploring the science behind thrill rides and embark on a hair-raising journey that ends up with Craig jumping out of an airplane!

Why Are Roller Coasters So Awesome?

Facing a Fear of Heights

Can’t we all just get along? Or will humans and nature always be at odds? The Good Stuff crew confronts nature head-on by investigating Craig’s life-threatening allergy to nuts, checking out a biosphere, bringing the Wooly Mammoth back to life, and visiting a town ruled by squirrels!

Can We Make a Pet Dinosaur?

How to Start a Fire the Old Fashioned Way

The Next Great Moon Race

Can We Find an Earth-Like Planet?

Can You Build a Warp Drive (In A Garage)?

Craig goes on a mission to find out where our energy comes from, where it goes, and how we will get it in the future.

What Is The Power Grid?

Why We Need A Revolution In Energy Storage

Is Nuclear Power Good or Bad?

Earthships: Living Off the Grid

The Secret Life and Art of Henry Darger

What the Heck is Dark Matter?

How Hackers are Making the World Safer

If at first you don’t succeed try, try again, right? The Good Stuff crew puts this old adage to the test by investigating a light bulb that has been burning for over a century despite the nefarious efforts of a secret cartel. They also take a peek into the trials of being an amateur wrestler while Craig trains for and runs a marathon!

Why Does Charles Trippy Put His Life on the Internet?

What Does it Take to be a Professional Wrestler?

Will Bananas be Wiped Out By Disease?

How Hard is it to Run a Marathon?

Gravitational Waves 101: How to Hear the Universe

This Light Bulb Has Been Burning for 115 Years!

The Good Stuff is an original web series.