Situated between the nation’s largest steel plant in Gary and a coal and natural gas-fired power plant in Michigan City, the Indiana Dunes nevertheless contain some of the most biodiverse wild spaces in the U.S. That’s right: in terms of biodiversity, the National Park Service ranks the Indiana Dunes number seven among its more than 400 properties.

That fact – coupled with the area’s more than fifty miles of hiking trails, expanding array of local restaurants and breweries, and accessibility – make it a prime spot for Chicagoans in search of a day-long or weekend getaway.

A Small Town with a Big Market

There are also quaint little towns nearby worth visiting, including Chesterton, a small town with a big arts community. Much of Calumet Road, Chesterton’s de facto main street, is a historic district, and today is home to a classic diner, an ice cream shop, and a winery, among other things. Newer buildings in the downtown area also house an array of boutiques, small galleries, and homey restaurants.

On Saturday mornings between May and October, more than 60 local vendors flock to Chesterton’s European Farmers Market in Thomas Centennial Park to sell vegetables, baked goods, artwork, artisan crafts, and much more.

Learn the Lay of the Land

After exploring Chesterton, stop at the Indiana Dunes National Park Visitor Center to plan the rest of your visit and gain a deeper appreciation for your surroundings. The visitor center is named after environmental activist Dorothy Buell, a former educator whose grassroots advocacy work was instrumental in saving the dunes from industrial development and creating the National Lakeshore in 1966. It has since become a National Park. (Similarly, the Indiana Dunes State Park, now an enclave inside the National Park, was established in 1926, thanks to the work of an earlier generation of scientists and nature enthusiasts.)

Interactive exhibits at the Visitor Center explore the park’s history and its ecology, including 9 different habitats that provide a home to more than 1,100 species of native plants, 46 species of mammals, 60 species of butterflies, and more than 350 types of birds. The latter include the belted kingfisher, great blue heron, and spotted sandpiper.

For a deeper dive into the park’s ecology, both the state park and the national park have their own nature centers. At the National Park Service’s Paul H. Douglas Center for Environmental Education, visitors will find an outdoor hands-on unstructured play area and indoor aquariums with frogs, snakes, turtles, and fish native to the region. Older kids and adults will also enjoy the many educational activities held there throughout the year. 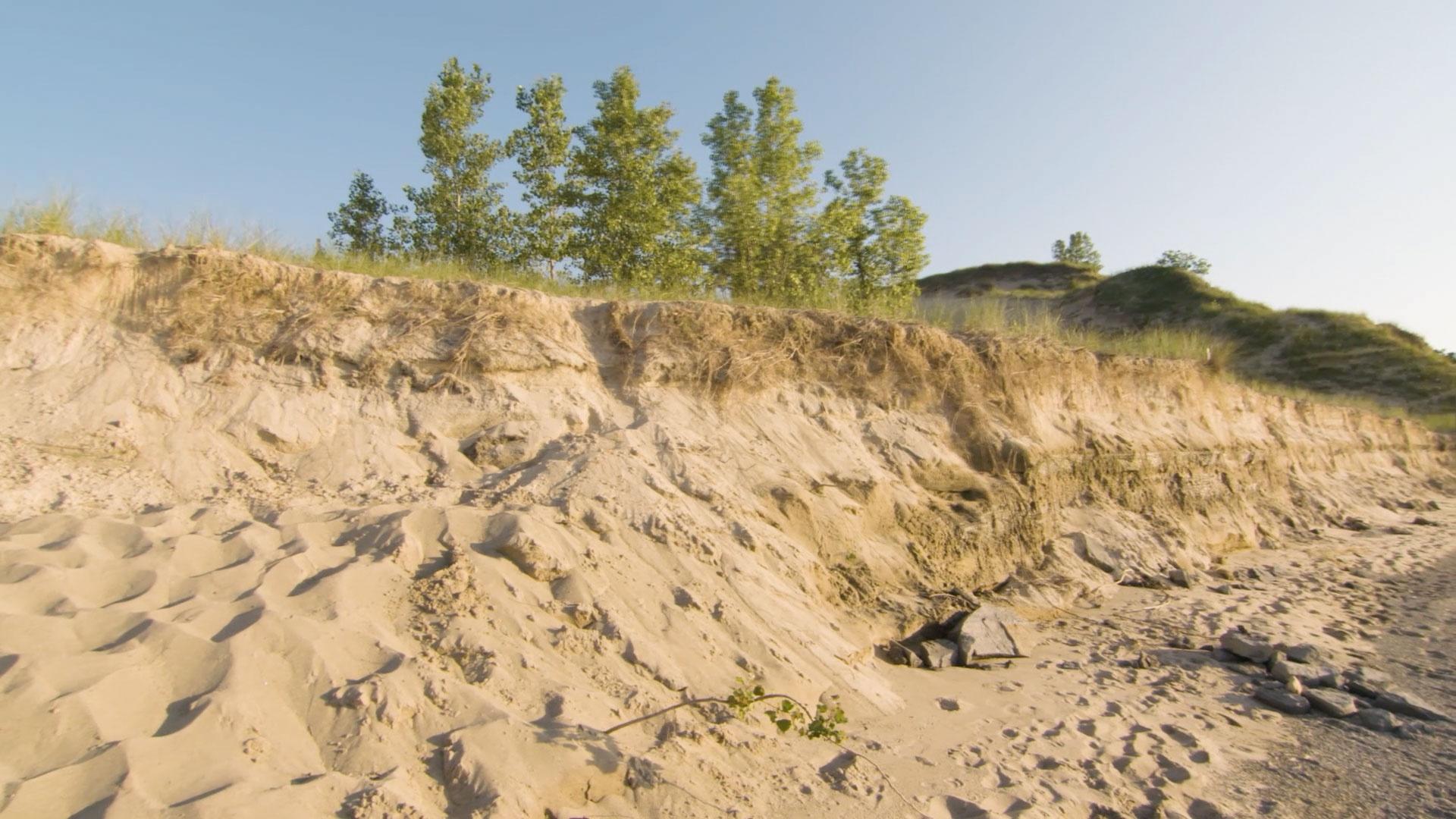 The Indiana Dunes and Climate Change

Climate change is amplifying threats to the biodiversity and stability of the Indiana Dunes. Here’s what you need to know to be a responsible visitor.

The visitor and nature centers are also great places to learn about the threats to the dunes’ unique habitats and what can be done to combat those threats. Visitors can assist those efforts, first and foremost, by staying on marked trails while hiking or walking to the beach. This both reduces the spread of harmful invasive species and helps protect the fragile grasses that hold the dunes in place.

The trails crisscrossing the Indiana Dunes offer something for every interest, mobility, and fitness level.

Behind the Douglas Center, a lovely, little .8 mile loop takes visitors through wetlands, past a pond, and through one of the last surviving and highest quality black oak savannas in the area. Oak savannas, grasslands where tall fire-resistant oaks stand among prairie plants, used to be abundant in the Midwest. But today, all but .02 percent have been cleared, developed, or neglected, according to the U.S. Fish and Wildlife Service. Park rangers at the Indiana Dunes have restored more than 1,000 acres of black oak savanna, and hikers can venture deeper into the savanna by taking the loop to the Miller Woods Trail, which ends at the beach.

Birders will love the 1.3-mile Great Marsh Trail, which takes hikers through the largest interdunal wetland complex in the Lake Michigan watershed, according to the National Park Service. Begun in 1998, a wetland restoration project has created critical habitat for breeding and migratory birds.

Another great spot for bird-watching – andwildflower viewing in the spring – is along the 3.3-mile Heron Rookery Trail, which follows the Little Calumet River. There are also great spots to fish along this trail during the spring and fall, when salmon and trout make their spawning runs from Lake Michigan into the river.

The 5-mile Cowles Bog Trail is a good choice for observing several of the distinct habitats found in the dunes, including ponds, marsh, swamp, black oak savanna, and, of course, the beach.

The trail is named for named for University of Chicago botanist and preservationist Henry Chandler Cowles. Cowles is revered as the one of the fathers of North American plant ecology, due in large part to the groundbreaking research he conducted here at the dunes. Near the turn of the twentieth century, Cowles was the first to document and bring international attention to the area’s unique flora. He was also integral in helping the world appreciate and preserve the area and fought to protect it from industrial development, which was already taking a toll during his lifetime. One of the major environmental battles at that time was against the glass industry (foremost among them, the Ball Brothers of Muncie, Indiana), which leveled the area’s tallest dune, known as the Hoosier Slide, by 1920.

The Prairie Club, formed in 1908 by Cowles, Jens Jensen, and other concerned Chicagoans, both advocated for the preservation of the area and organized frequent trips that helped Chicagoans enjoy it. Many have been following in their footsteps ever since.

After all that hiking, you might want to soak up some sun, and with more than 15 miles of sandy beaches, there are many excellent options in the state and national parks. Proceed into the water with extreme caution, though, as the rip currents on this end of the lake can be much stronger than they appear.

The main beach at the Indiana Dunes State Park has the most amenities: lifeguards are on duty from Labor Day through Memorial Day, and snacks can be purchased at the beautiful historic pavilion.

The only beach in the national park with a lifeguard is West Beach, a popular destination where visitors with mobility challenges can also check out beach wheelchairs for use on site.

If you’d rather get away from the crowds, access points along the eastern side of the National Park tend to be less populated – although you have to be ready to walk some distance with your beach gear, depending on where you’re able to find parking.

Travel Back to the Future

If you drive out to the east side of the dunes, you’ll notice a smattering of unique homes very close to the beach. These so-called Century of Progress Homes were displayed at the Chicago World’s Fair of 1933 as part of a futuristic demonstration of how technology and new materials could one day revolutionize home building and domestic life. The House of Tomorrow contained an airplane hangar – under the assumption that every future family would have their own airplane. The all-steel Armco-Ferro House, which was designed to be affordable and mass-producible, inspired later prefabricated homes. The pink Florida Tropical House blended indoor and outdoor environments. And the Wieboldt-Rostone house, built with a steel frame and covered with an artificial stone, was believed to be strong enough to withstand any environment.

When the fair closed, developer Robert Bartlett floated the Century of Progress Homes across the lake on barges to be showpiece properties in his new resort community of Beverly Shores. (That was before the surrounding property became part of the National Park Service.) Today, they’re landmarked and rented to private tenants who are required to foot the bill for restoration. They are opened once a year for guided tours.

Watch Chicago from a Distance

Enjoying a sunset on the beach before you leave the Indiana Dunes is a must, particularly when it is clear enough to see the Chicago skyline in the distance.

If you’re hungry for dinner, you can make a run to the South Shore Ovenworks in Beverly Shores for a wood-fired-oven pizza to go. It is located in the parking lot of the Beach Stop, which has just about anything else you might need (including tents, should you make a last-minute decision to spend the night at the nearby campground).

If you’d like to eat at a full-service restaurant, there are many choices in Chesterton and slightly further east in Michigan City.

Vegetarians who enjoy interesting beers will appreciate Hunter’s Brewing, which features a full vegetarian and vegan menu and a rotating selection of inventive brews concocted by Amy Gentry, one of the only female brew masters in Indiana. Hunter’s looks like a storage unit on the outside, but don’t let it fool you. Inside is a warm mahogany tasting room – as well as a cordoned-off area to separate the bar from the restaurant, which allows children to legally enter the premises. (An Indiana law prohibits underage patrons – including babies – from entering drinking establishments unless there is a separate dining area.)

Beef eaters will enjoy Octave Grill in Chesterton – though reservations are recommended. Here, Chef Casey Petro combines grass-fed beef patties with regional and house-made ingredients. A local favorite is the Chanute Burger, with cremini mushrooms, blue cheese sauce, bacon, and a habanero havarti from Indiana’s Fair Oaks Farms. Octave Chanute, the inspiration behind the burger and the restaurant, was a civil engineer who invented and tested the first biplane glider in the Indiana Dunes in 1896. Chanute was also a friend and mentor to Wilbur and Orville Wright, who built upon his experiments when they developed their first successful airplane just a few years later.

As you travel back to Chicago with a full belly and sand between your toes, may you also be inspired – by the inventiveness and passion of those who have come here before you, by the beauty of this place, and by the hard work of so many activists and environmentalists who fought to make sure the diverse landscapes would still here for us to enjoy all these decades later, right on Chicago’s doorstep.