How to Draw a Dinosaur: An Interview with a Paleoartist | Detours | Prehistoric Road Trip 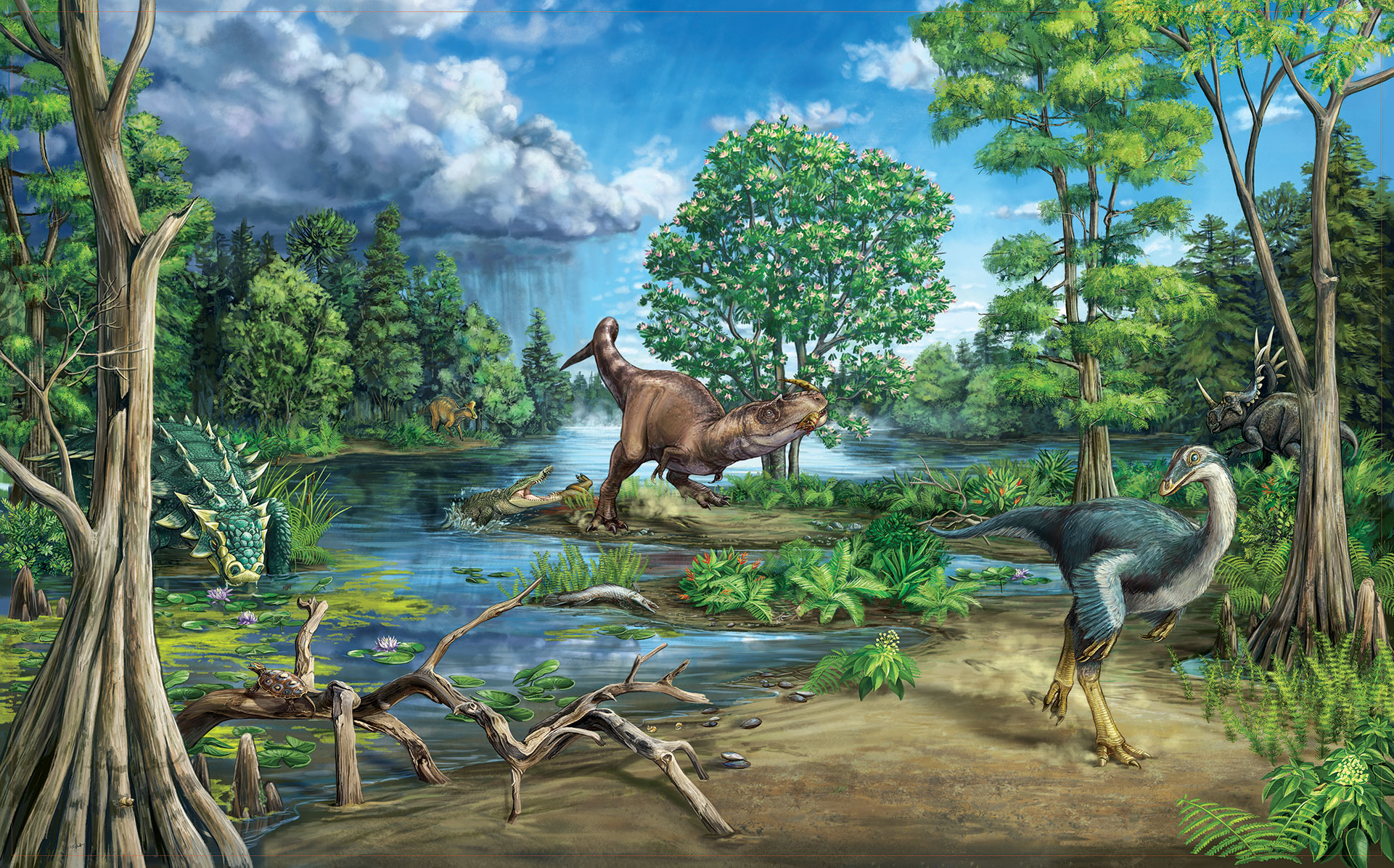 How to Draw a Dinosaur: An Interview with a Paleoartist

If you’ve ever walked around a museum and explored a dinosaur exhibit, you’ve probably seen a drawing, painting, or illustration of those peculiar beasts that lived millions of years ago. Sometimes, it’s a sketch of the full skeleton of a T. rex or an elaborate scene depicting Triceratops walking among the greenery with other dinosaurs in the background. Behind those brush strokes is a special kind of artist: a paleontological illustrator, a.k.a. a paleoartist.

Danielle Dufault, a research assistant and scientific illustrator at the Royal Ontario Museum in Toronto, is one such artist. It’s her job to take the fossils of dinosaurs and other animals and turn them into a realistic illustration of what they probably looked like. That’s no easy feat since she doesn’t exactly have a live model from which to draw. 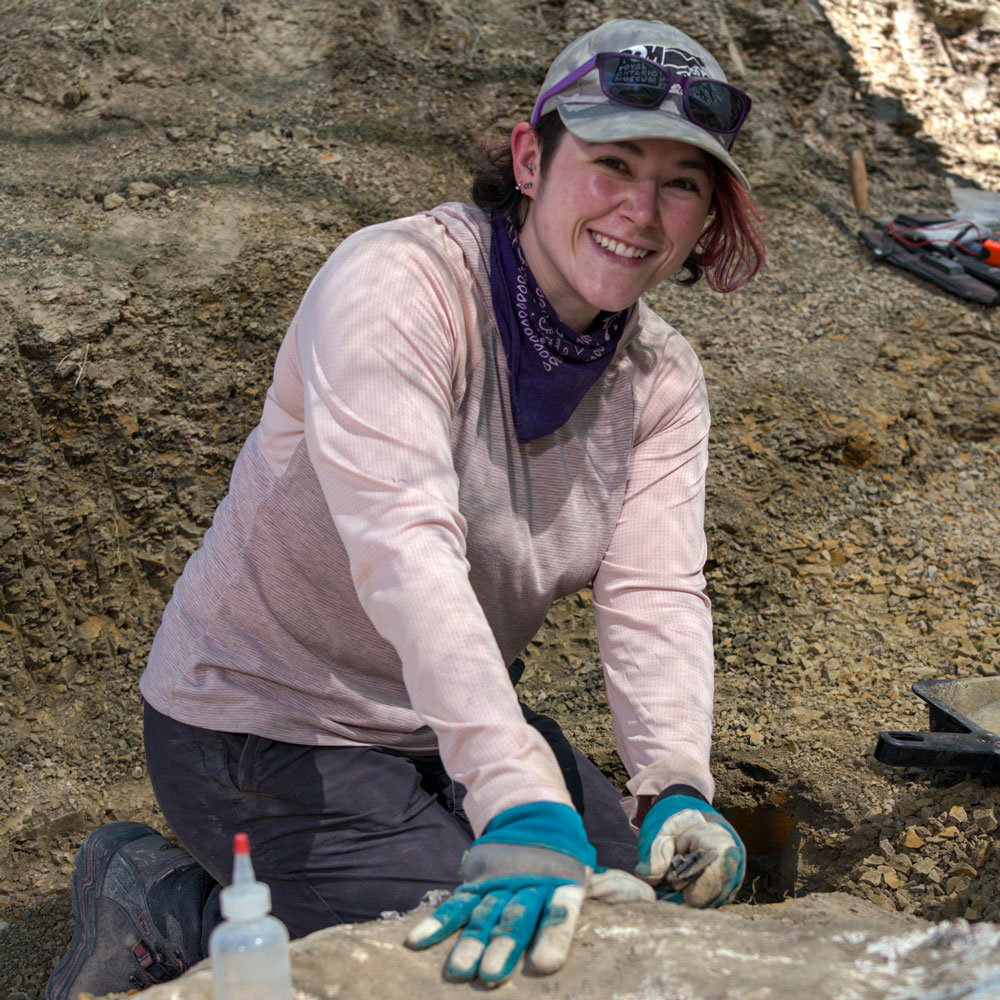 Danielle Dufault is a paleoartist. She also participates in digs with paleontologists and once discovered the skull of a Triceratops. Photo: Julie Florio

Dufault, who is also the host of a popular YouTube channel about animals, said she has always been fascinated by the natural world and has been drawing creatures since she was a kid.

“I remember catching bugs and keeping them in little containers and trying to draw them, and I guess it sort of grew into a bigger love for both the art and the biology,” Dufault said.

But today, the subjects of Dufault’s illustrations are a little more, well, dead. Because she works in a lab that studies dinosaurs from the Late Cretaceous period, those animals are most often the subject of her art. (Part of working in that lab, by the way, involves going out on digs. She even found a Triceratops skull a couple of summers ago; learn more about in the video below.)

So how do you draw a dinosaur? Working in the lab, Dufault makes first-hand observations of fossil specimens, generates ideas with the paleontologists she works with, and makes sure everything is anatomically accurate.

“In terms of trying to draw something that doesn't even exist or can't be observed, you need to kind of make analogues with what exists in the world, what we do have, and what comparisons can be made there, both anatomically and ecologically,” Dufault said. “There's a lot of things that we can learn about the past by just looking at the present.”

Every artist has a style, too. While Dufault sometimes sketches by hand, a lot is done digitally. Much of her work is pretty technical – skeletal reconstructions or sketches of fossils that end up in an academic journal article. But when she gets to do something a bit more creative, such as an illustration that will be displayed in the museum?

“I really enjoy that more expressive illustrative style where you can kind of see some of the texture of the paint or the pencil and try and capture the essence in a little bit more of a simple, visually pleasing way,” she said. “I still try and make them try to look real and believable, but slightly interpretive.” 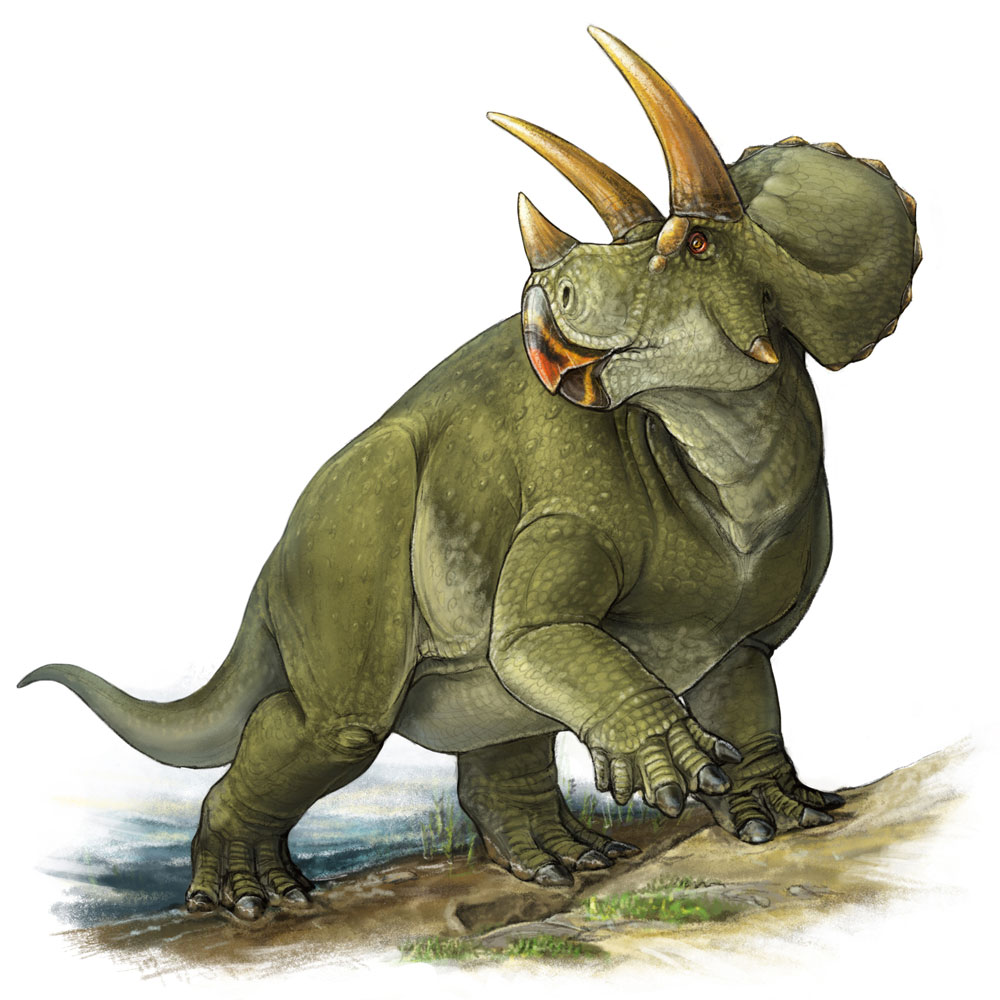 Dufault said an animal’s display structures, such as the frill on a Triceratops, help her determine what colors she wants to use. Image: Danielle Dufault, Royal Ontario Museum

Then there’s the issue of color. Because all that remains of the dinosaurs are their bones, we have no real concept of what their skin might have looked like. Dufault said that choosing colors for the creatures is something that comes later on in the piece, after everything looks anatomically and structurally correct.

“When it comes to choosing color, I get to have a little bit of fun,” Dufault said. I always try to make sure that the vision of what the dinosaur looks like matches whoever’s publishing [work on] a dinosaur. I think that’s pretty important. But beyond my personal preference, it’s really important to consider how color is used by animals in their ecological setting.”

For example, if an animal had a little bit of structural flare to it, like the Triceratops with its frill, Dufault said there’s a good chance they may have had some flashy colors, even if it was just to show off for one another. But smaller animals that would have been more vulnerable? They might look a little bit more drab in order to blend in with their surroundings. As with most of her work, Dufault looks to animals today for inspiration on when and where to add color.

As with color, many of the challenges to drawing long-extinct animals is that there are questions there are no clear answers to. Luckily, Dufault’s creativity serves her well in those instances.

“The beauty of the things that we just don't know is that sometimes new fossils do give us hints as to clarifying these questions, and so there's always going to be new information to try and represent,” she said.

Part of the joy of her job, said Dufault, is that she gets to help the public revel in the mystery of what these animals might have looked like. 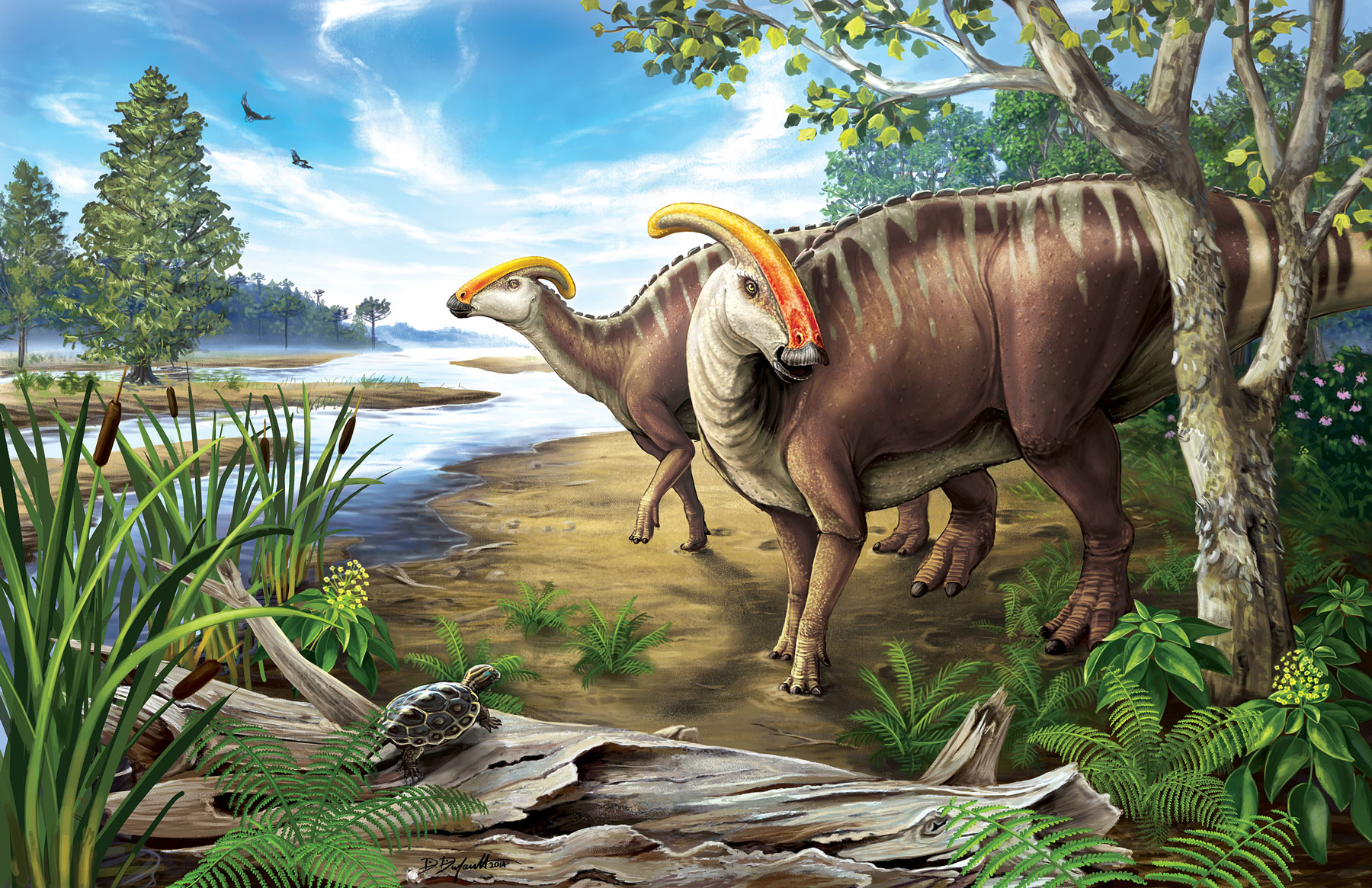 Parasaurolophus was a genus of herbivores from the Late Cretaceous. Image: Danielle Dufault, Royal Ontario Museum

“There are these gigantic, strange, and elaborate-looking beasts that have left physical evidence of their existence, and yet we'll never really be able to see them as they were. People are really intrigued by that mystery,” she said. “When a new creature gets described and published on, I literally get to implant that first image of what they looked like in life, and I want people to get excited by that and fascinated by that.”

Dufault also hopes that seeing these creatures will provide the public a connection with the animals of the past as well as the animals walking our planet today.

“Learning how these populations went extinct and also how they recovered is a big focus in paleontology these days, and I think that if people get fascinated by the creatures themselves, then they might also develop a love or interest in preserving what is here today.”