Mary Todd Lincoln had a troubled life, both fascinating and heartbreaking. The relevance to today’s history is compelling. So have first ladies really come that far?

Mrs. Lincoln was an educated, sophisticated woman from a wealthy, Southern family. Like all women of that era, she had few rights in a repressed, male-dominated society. She didn’t even have the right to vote.

Mrs. Lincoln had a history of depression dating back to childhood. Today, a doctor might diagnose her with major depressive disorder with recurrent features – moodiness and depression with accompanying hallucinations, delusions, and poor judgment. A doctor might prescribe medications or behavioral therapy.

Before her insanity trial, her hallucinations included seeing smoke spewing out of a chimney and she confided to her son Robert that Chicago was burning…long after the 1871 Chicago fire. She thought Indian spirits were taking bones from her face and pulling wires from her eyes. She stuffed her pockets and petticoat with $57,000 dollars in securities (worth more than a million dollars today), yet she thought she was impoverished.

An alternative diagnosis might have been bipolar disorder, as she had episodes of depression and periods of extreme highs and overexcitement also known as hypomania.

Her excessive shopping, during which she purchased large quantities of single items – more than 60 pairs of gloves, for example – is a symptom of her hypomania. She frequently returned all the items she bought.

But who could blame her for her behavior?

Mary Todd Lincoln had tremendous loss and sadness throughout her life. Mary’s mother died when she was 6 years old, and she was sent off to boarding school. She lost three of her four children: Eddie at age 3, Willie at age 11, and Tad at age18. Her husband was murdered while she sat by his side.

As with other first ladies before and after her, Mary’s husband was beloved and cherished. Yet she herself was never popular, or even well-liked, and was criticized when she and President Lincoln were living in the Executive Mansion, now known as the White House.

Northerners and Southerners disdained her equally. Critics believed she spent too much money decorating the Executive Mansion. She purchased an overabundance of curtains, clothes, and furniture.

Her dresses were lavish, flowing, and finely detailed. They were designed by her close friend and freed slave Elizabeth Keckly, another reason she was scorned.

She held seances in the Executive Mansion as a way to connect to her family that had passed before her.

Mary Todd Lincoln, however, was not the only first lady who was ridiculed by the public and press. Jackie Kennedy was criticized for her couture clothing, Nancy Reagan for her use of astrology, and Hillary Clinton for her ambition. In this regard, the past certainly does meet the present.

In light of Mrs. Lincoln’s many issues and society’s misunderstanding of how to deal with them, perhaps we can look at her and our other first ladies with compassion for the tremendous stresses of the times in which they lived. 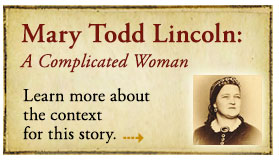 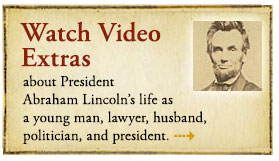 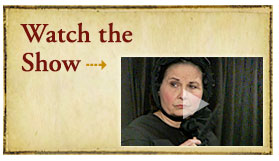 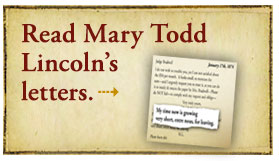 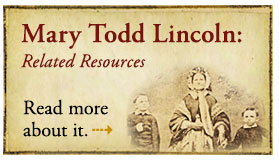