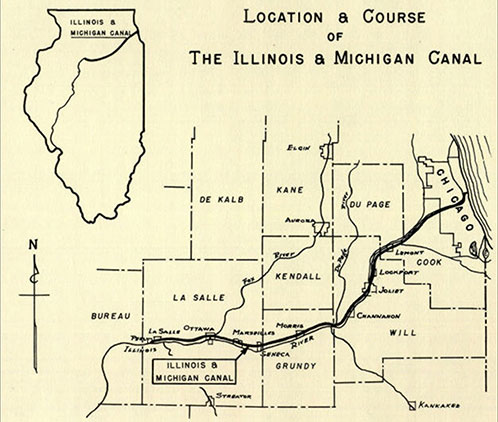 The Illinois & Michigan Canal is completed, connecting the Great Lakes to the Mississippi River via the Chicago River. Over the next few decades, this new trade route attracts a shipping industry that will transform Chicago from a sleepy frontier town into a booming metropolis. 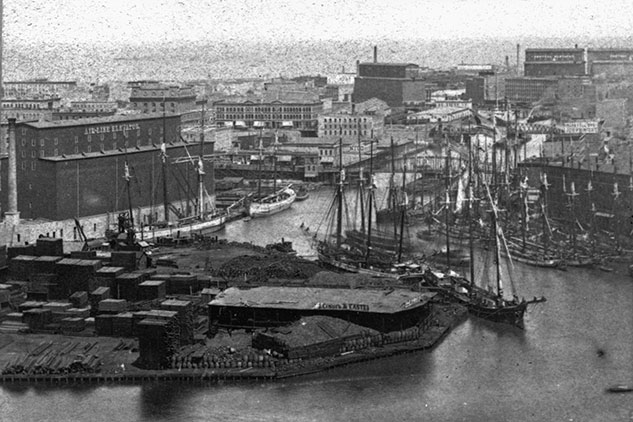 Thanks to the I&M Canal, the Chicago River grows into one of the busiest ports in the world. Chicago attracts more grain and lumber ships than New York, San Francisco, Philadelphia, and Baltimore combined. Congestion on the river becomes increasingly challenging. Shown here is Wolf Point circa 1885. 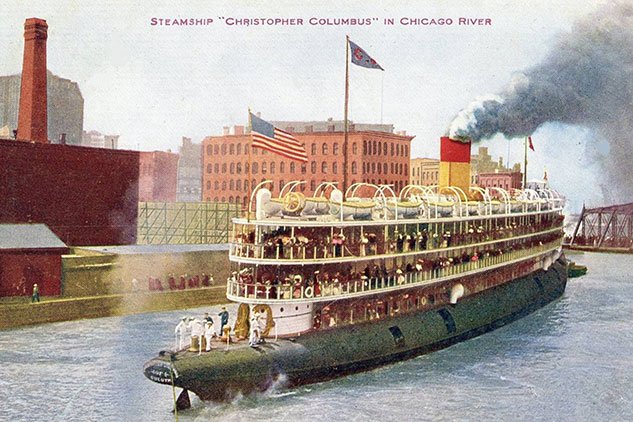 Passenger steamliners such as the S.S. Christopher Columbus become a common sight on Lake Michigan, taking Chicagoans to Michigan and Wisconsin. They pick up passengers at stops along the Chicago River, adding to the congestion.

The Plan of Chicago (also known as the Burnham Plan after its mastermind, Daniel Burnham) sets forth a comprehensive vision for the city’s infrastructure and calls for the construction of several Piers. 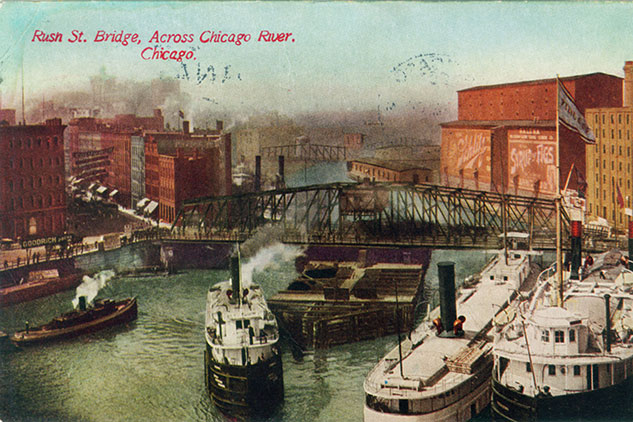 Congestion on the Chicago River continues, underscoring the need for a lakefront Pier. 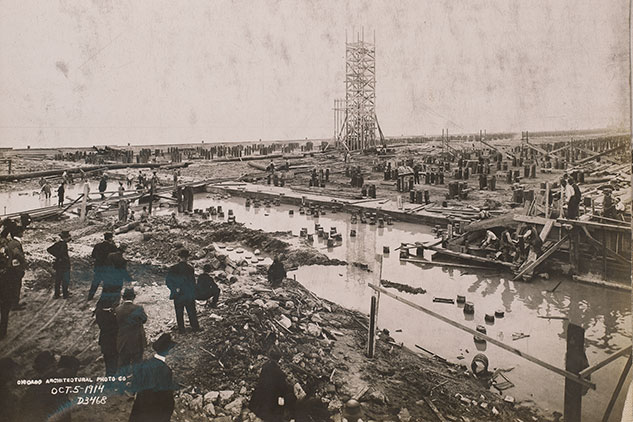 Municipal Pier is constructed atop 20,000 timber logs imported from Oregon. 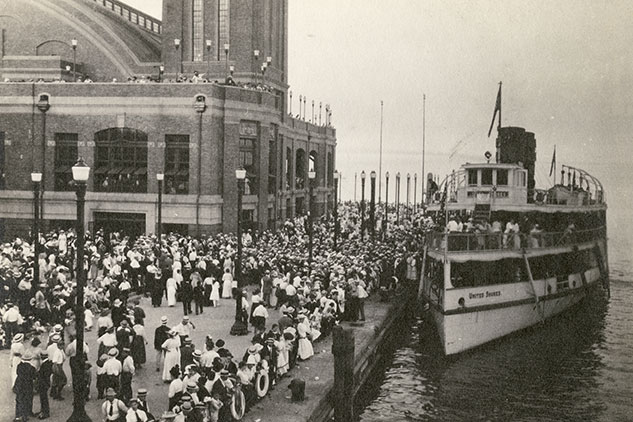 Municipal Pier is completed at a cost of $4.5 million. It stretches 3,300 feet (about 5/8 mile) into Lake Michigan, with a head house greeting visitors on the west end, the Grand Ballroom ready to host special events on the east end, and two long freight sheds spanning the distance between. 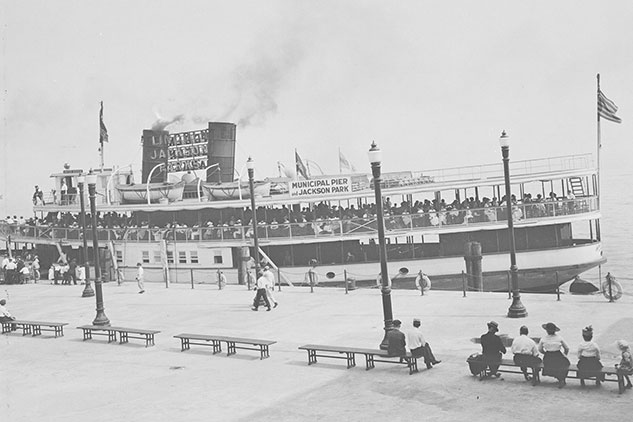 The Pier serves as both a shipping depot and a place for Chicagoans to relax. The Chicago Tribune declares: “No city in the world has any structure on a water front that compares with the new Municipal Pier.” 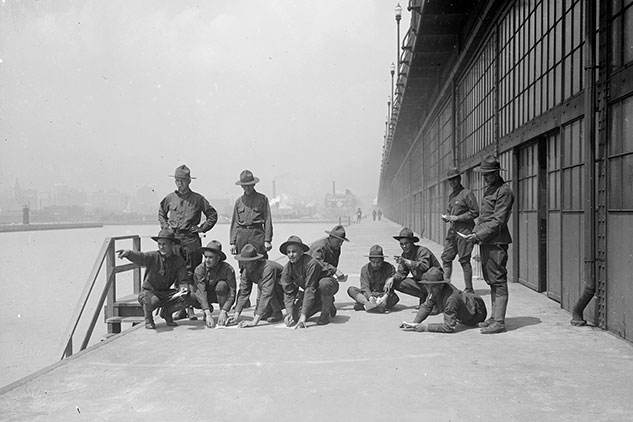 In April 1917, the U.S. declares war on Germany, and the Pier steps up. Within one month, a military recruitment center opens on Municipal Pier. Soon, the Pier houses multiple military uses including barracks, a Red Cross training center, and even a jail for draft dodgers. Shown here: members of the U.S. Army’s Third Reserve Engineer Division.

Municipal Pier hosts the first of two Pageants of Progress – a huge expo that draws hundreds of thousands of people for exhibitions and entertainments including mock pirate attacks, sky-diving exhibitions, speedboat races, and a boxing exhibition by Jack Dempsey.

The Car vs. The Pier 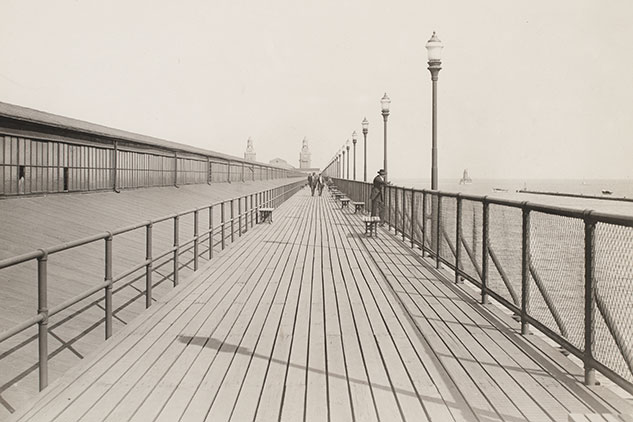 The Voice of Labor 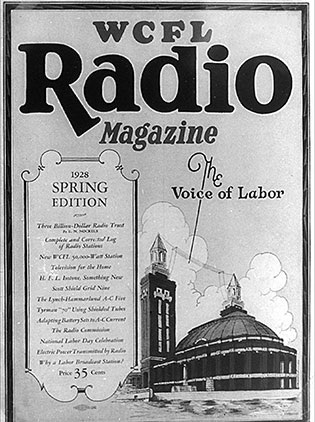 The first radio station in the world owned and operated by organized labor begins broadcasting from Municipal Pier. WCFL’s call letters stand for the Chicago Federation of Labor; its motto is “The Voice of Labor.” 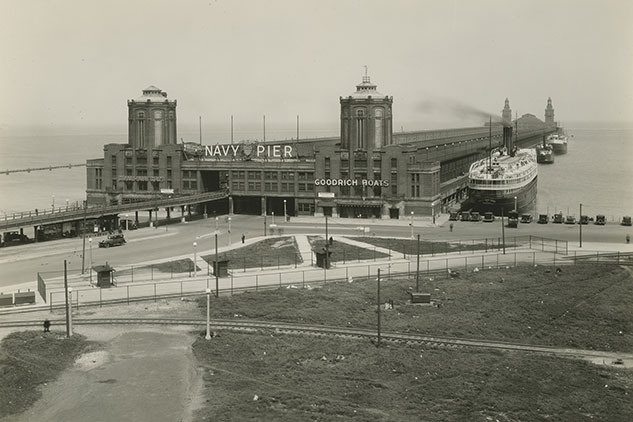 Municipal Pier is renamed Navy Pier to honor those who served in World War I. The new name will prove prescient, as the Pier will play a major role in preparing service members during World War II. 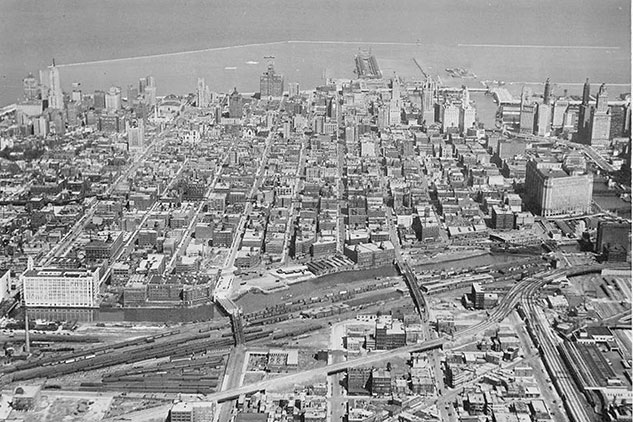 The Pier hosts a variety of events and expos such as the Automotive Services Industry Show, the National Motor Truck Show, and the Flower and Garden Show.

A Century of Progress

Navy Pier offers spectacular views of the 1933 World’s Fair, which is taking place on the lakefront just south of the Pier. Themed “A Century of Progress,” the Fair celebrates the centennial anniversary of Chicago’s incorporation. 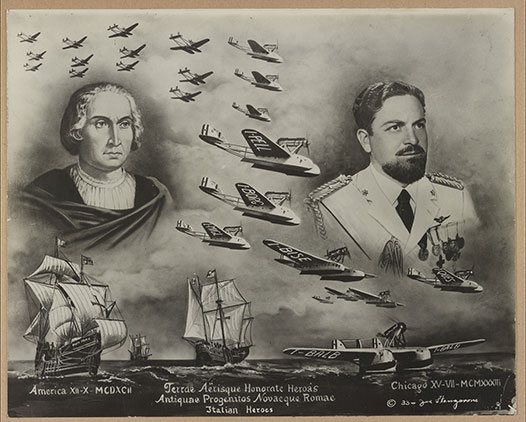 Visitors to Navy Pier are treated to a sensational sight: a phalanx of 24 silver seaplanes flying in formation. Having flown all the way from Rome, they are visiting Chicago in honor of the 1933 World’s Fair.

The leader of the group is Italo Balbo, a member of Italy’s Fascist regime. He is greeted as a hero, labeled the next Charles Lindbergh, and compared to Christopher Columbus; Chicago’s 7th Street is renamed for him.

In urgent response to the Japanese attack on Pearl Harbor, two passenger steamers are converted into makeshift aircraft carriers for training operations on Lake Michigan. More than 15,000 Naval aviators, including future President George H.W. Bush, receive training here. About 100 planes sink in Lake Michigan (and are still being recovered today). Shown is the steamer SeaandBee, once the largest inland passenger carrier, before and after its transformation into the training carrier USS Wolverine. 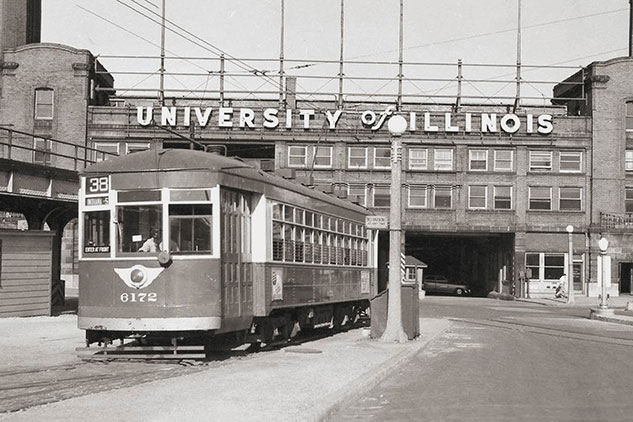 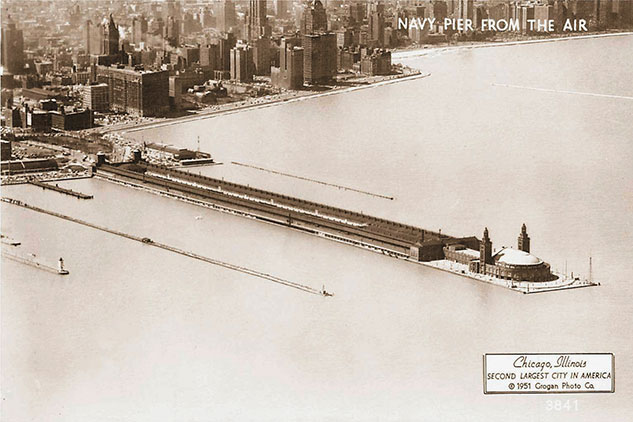 Navy Pier continues to receive cargo ships and host trade shows, while its infrastructure begins to show wear. Students at UIC complain of cold breezes in their makeshift classrooms. 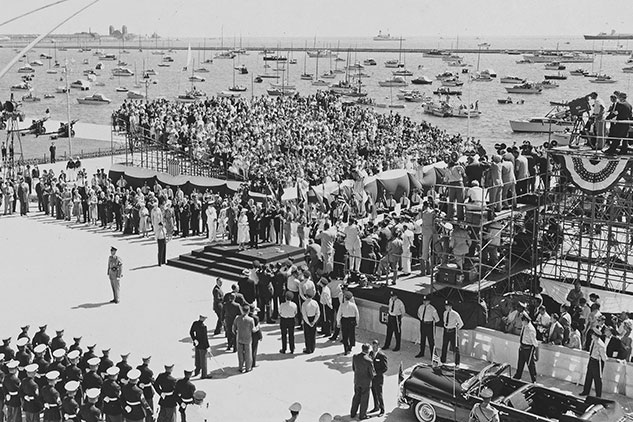 Queen Elizabeth II and Prince Philip visit the Pier during the Chicago International Fair and Exposition, a showcase of global business. 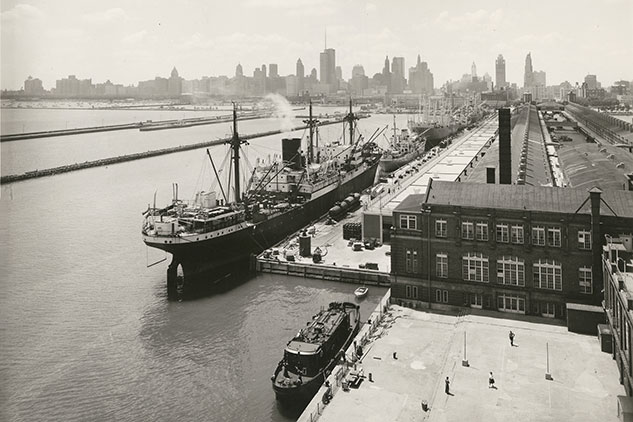 The Pier reaches its peak cargo volume in 1964. 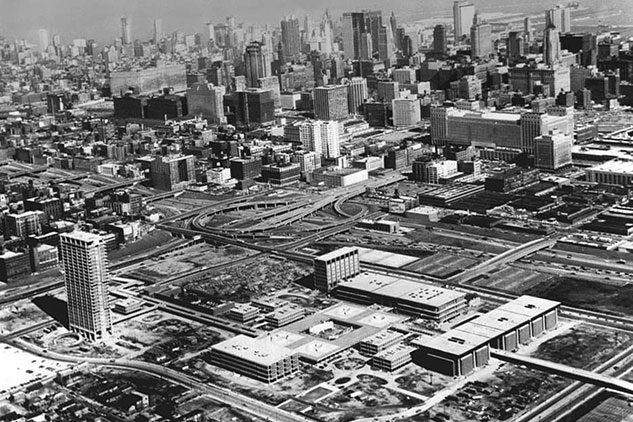 Having outgrown its classroom capacity on the Pier, UIC moves to larger quarters at the Circle Campus, where enrollment will grow over 300% in the next five years. 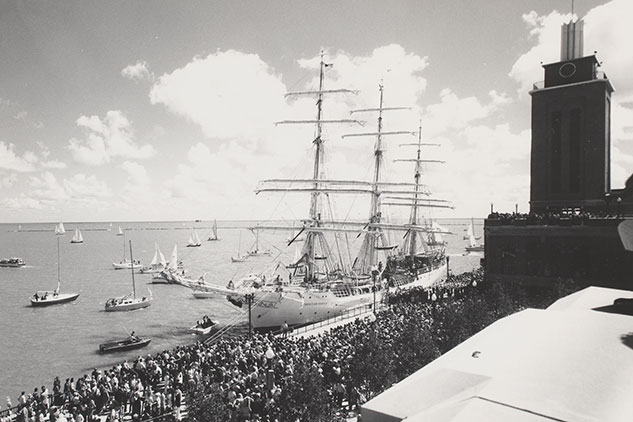 The Christian Radich, a celebrated tall ship from Norway, visits the U.S. as part of the nation’s Bicentennial celebration and docks at Navy Pier. Thousands of people visit the Pier to see her. 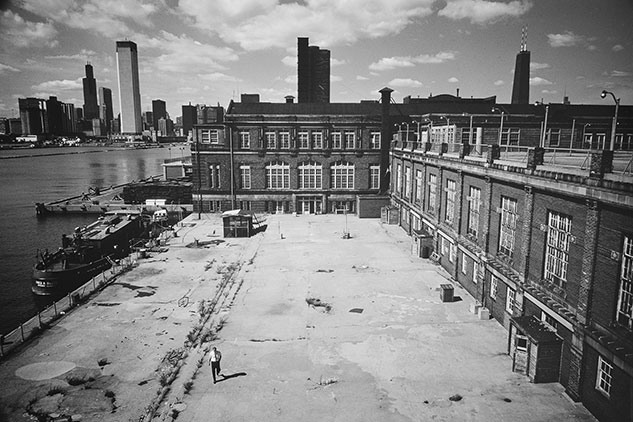 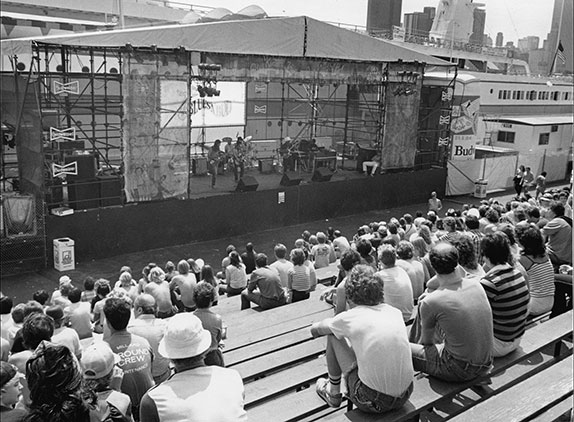 ChicagoFest, a ten-day summer music festival, draws half a million people to the Pier and focuses attention on its value as a “pleasure Pier for public use.” ChicagoFest continues each summer for four years, with local and national acts including Willie Dixon, Jim Peterik, Chuck Berry, Journey, Head East, Muddy Waters, and in 1982, Frank Sinatra. In its final year, the fest becomes the target of a boycott by civil rights activists led by Jesse Jackson. The boycott compels Stevie Wonder to cancel his scheduled appearance. 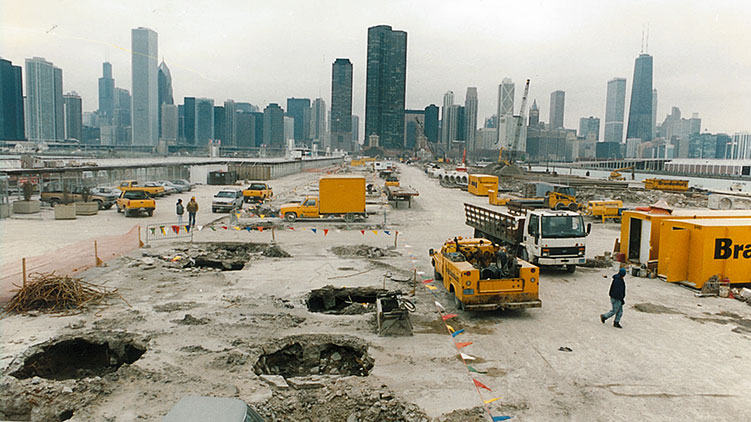 The long freight sheds between the headhouse and the Grand Ballroom are demolished to make way for Navy Pier’s next chapter.

A Focus on Fun 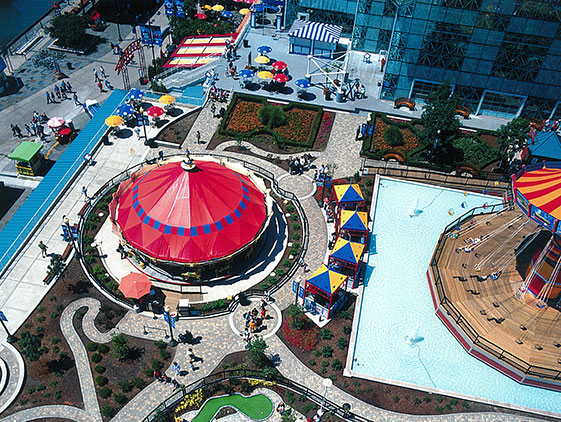 A four-year, $150 million restoration of the entire Pier is unveiled, with emphasis on amusements and entertainment. The centerpiece is a new, 146-foot tall Ferris wheel, an homage to the original Ferris wheel that graced the 1893 Chicago World’s Fair. 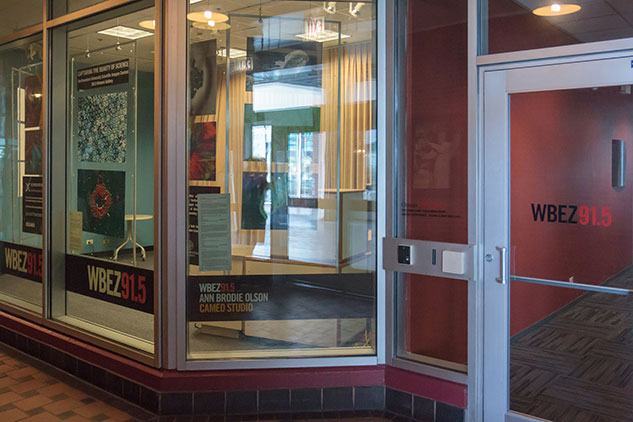 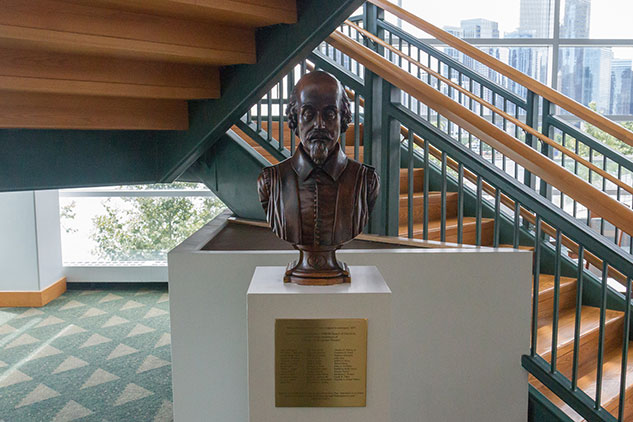 The Chicago Shakespeare Theatre, founded in 1986, moves from its Lincoln Park home to Navy Pier. 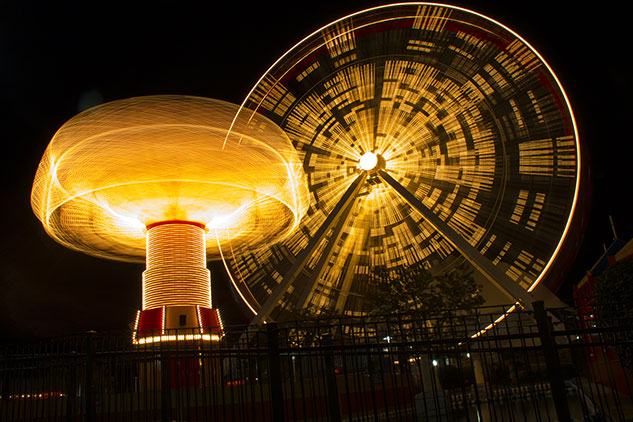 Clinton Shepherd, a Pier employee, sets a record for the longest Ferris wheel ride and makes the The Guinness Book of World Records. 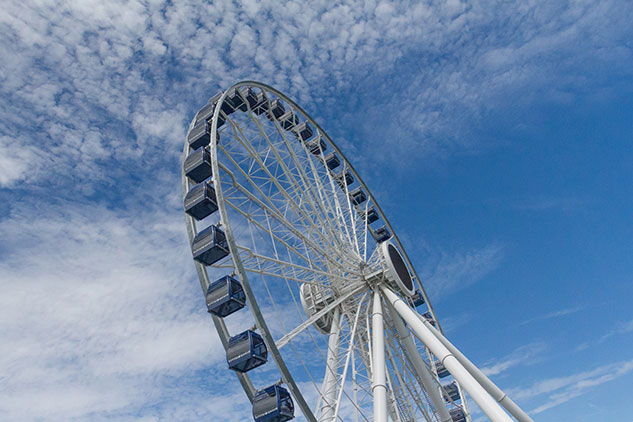 Navy Pier celebrates 100 years of reinvention. Dock Street gets a refreshed “Pierscape” by the designers of New York’s High Line. A new, taller Ferris wheel with climate-controlled gondolas is inaugurated to commemorate the anniversary. It is aptly named the Centennial Wheel. Plans for a hotel are announced. 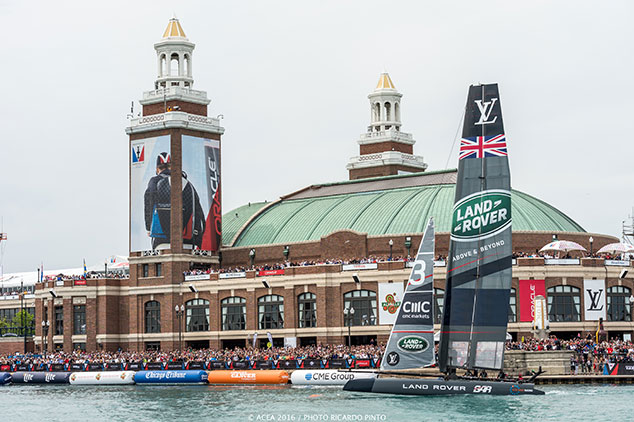 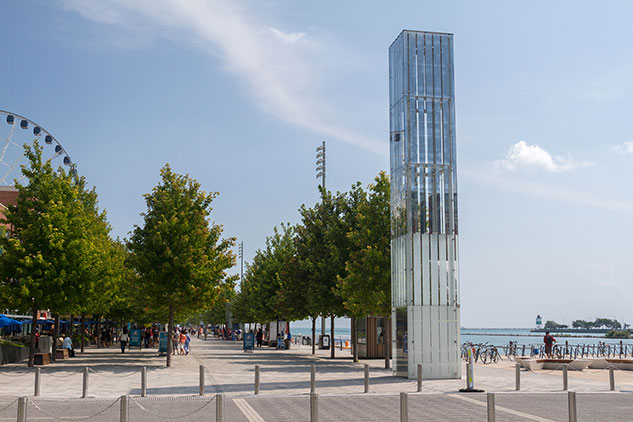 Navy Pier announces that over the next 30 years, it will adopt ambitious environmental practices and become a model of a sustainable urban landscape. Among the innovations the Pier implements: native plantings, benches constructed of recycled materials, efficient energy use, and greener water reclamation practices.