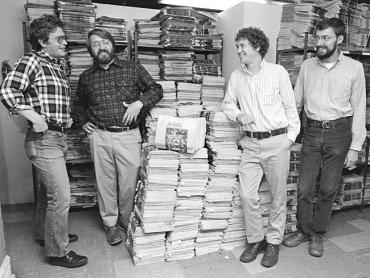 The founding members of the Chicago Reader

Every day, thousands of Chicagoans pause to stoop on street corners and in doorways of coffee shops to acquire a copy of the beloved and free alternative weekly, the Chicago Reader. The Reader was founded in the fall of 1971 by a crew of mostly unemployed friends, eager to supply the city’s broad-minded youth with a brand of journalism willing to dig deeper than the dailies.

Bob Roth, one of the founding members of the publication, came up with the idea for the Reader while studying at Carleton College. He spent a summer in Boston and was inspired by its dueling alternative weeklies, Boston After Dark and The Phoenix. The first issue of the Reader, a mere 16 pages, was written at the dining room table of a Hyde Park apartment. The initial press run of 56,000 copies was printed from a copy machine and then distributed from Bob’s Volkswagen. The publication was wildly popular among young, educated, and unmarried Chicagoans who had money to burn on records and nightlife, and as distribution grew, so did the Reader’s advertising base.

‹ Art in Chicago up Cinema ›