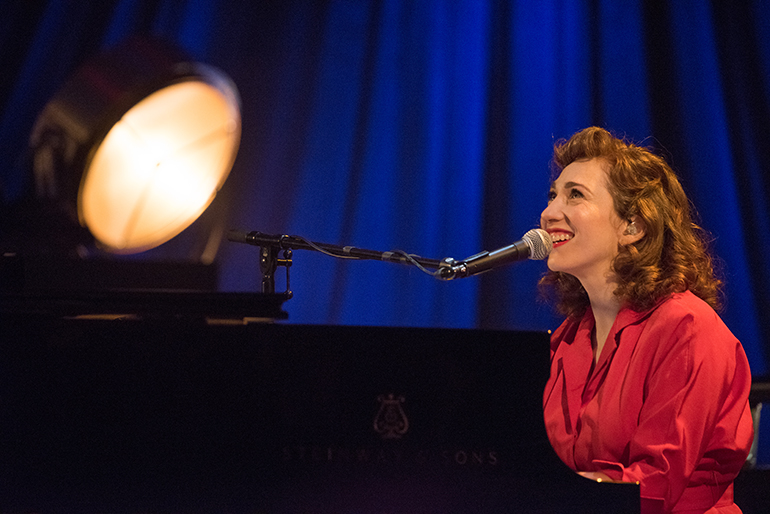 The acclaimed singer-songwriter and multi-instrumentalist REGINA SPEKTOR – known for her chart-topping albums and soulful and evocative songs and music videos – will be featured in a new hour-long special in the popular music series SOUNDSTAGE, airing on PBS stations nationwide in October 2016, with its local premiere on WTTW11 on Thursday, October 6, 2016 at 8:00 pm.

In this unforgettable SOUNDSTAGE concert captured for PBS in WTTW’s intimate Grainger Studio before a live audience, the classically trained Spektor – writer and performer of the Grammy-nominated title theme for the popular Netflix series ORANGE IS THE NEW BLACK – sits down at the piano to share her most personal and popular songs. Backed by a lush string section, Spektor’s set features tracks from her highly anticipated seventh studio album Remember Us to Life, to be released September 30 on Sire/Warner Bros Records, plus selections from her previous bestselling albums. The stunning visuals, intimate setting, and above all, Spektor’s soaring vocals and joyous, heartfelt performance will resonate strongly with audiences, making for a magical viewing experience.

“I deeply love PBS and was super glad to play the legendary SOUNDSTAGE in Chicago,” said Spektor. “What an amazing way to share my new music with all the other devoted PBS watchers around the country!”

“It was truly an honor to work with such a uniquely talented artist,” said Joe Thomas, Executive Producer and Director of SOUNDSTAGE. “It’s a privilege to add Regina Spektor to the roster of music greats whose performances are synonymous with this long-running and successful series.”

About Regina Spektor
Born in the Soviet Union, Spektor began studying classical piano when she was six. Her family emigrated in 1989, landing in New York City, where she continued her classical training. Spektor eventually studied composition at the Conservatory of Music at Purchase College where she graduated with honors. She began writing pop songs in her late teens and made her recorded debut in 2001 with the self-released 11:11, a collection of songs heavily influenced by jazz and blues. Songs followed in 2002 and Soviet Kitsch in 2004. Spektor’s commercial breakthrough came in 2006 on her fourth LP, Begin to Hope. The gold-certified album included the singles “On the Radio,” “Better” and “Fidelity,” which climbed the Billboard Hot 100 singles chart. Spektor’s fifth album, Far released in 2009, and sixth album, What We Saw From the Cheap Seats released in 2012, both debuted at No. 3 on the Billboard 200 albums chart.

Spektor’s songs have appeared in TV shows and movies including Orange Is The New Black, Grey’s Anatomy, Weeds, How I Met Your Mother, Veronica Mars, The Good Wife and (500) Days of Summer. Spektor played for the Obamas and guests at the White House and performed as part of philanthropic campaigns for Tibet, Doctors Without Borders, and many more.

About SOUNDSTAGE
Long before MTV and VH1, the acclaimed WTTW series SOUNDSTAGE debuted with an innovative concert format that was unique to television. This timeless music program garnered widespread critical acclaim and featured many artists who defined the musical eras, including such luminaries as Bob Dylan, Aretha Franklin, and the Doobie Brothers. Since the 1970s, an eclectic variety of musical artists across pop, rock, country, soul, bluegrass, and folk genres have appeared on the series, including Tom Petty, B.B. King, Toby Keith, Dave Matthews Band, Emmylou Harris, John Mayer, Sheryl Crow, Brian Wilson, Cyndi Lauper, and many more. SOUNDSTAGE is taped in WTTW’s Grainger Studio in Chicago, and at special venues across the country. Visit wttw.com/soundstage, and connect on Facebook, Twitter, and the SOUNDSTAGE YouTube channel.

About WTTW Chicago
WTTW Chicago produces and presents a wide array of engaging content for the national public media system, with series and specials on education, politics, public affairs, science, business, arts and entertainment, history, travel, how-to, and religion. In addition to its landmark music series SOUNDSTAGE, additional WTTW Chicago series include 10 THAT CHANGED AMERICA and other architecture specials with Geoffrey Baer; MEXICO — ONE PLATE AT A TIME with Rick Bayless; and the new animated series NATURE CAT. For more information, please visit wttw.com/national.

About PBS
PBS programming invites viewers to experience the worlds of science, history, nature and public affairs; hear diverse viewpoints; and take front-row seats to world-class drama and performances. Viewer contributions are an important source of funding, making PBS programs possible. PBS and public television stations offer all Americans from every walk of life the opportunity to explore new ideas and new worlds through television and online content.

For images and additional up-to-date information on this and other PBS programs, visit PBS PressRoom at pbs.org/pressroom.