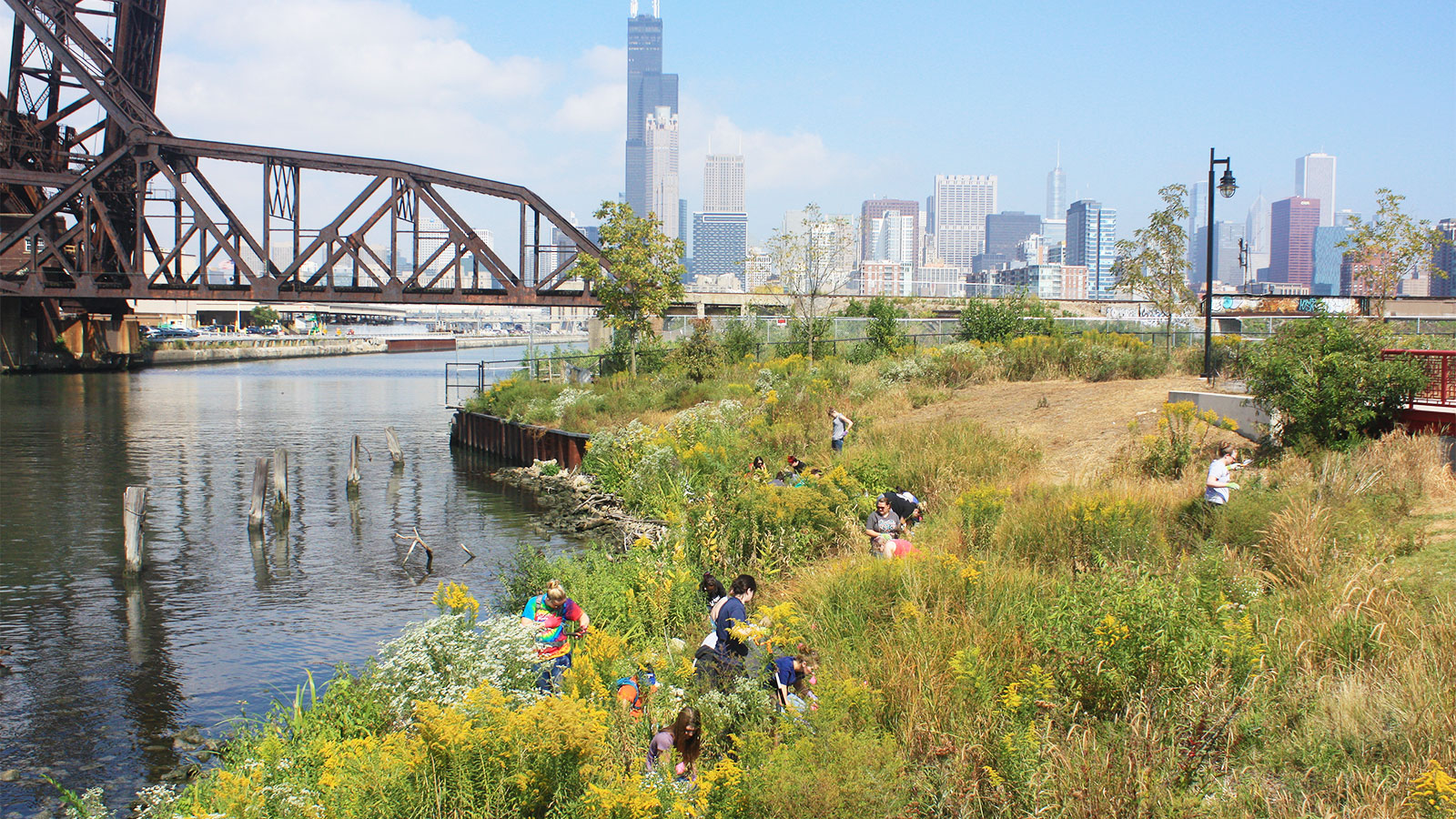 Six Ways You Can Help the Chicago River

In recent years, the Chicago River has become safer and healthier – for all living creatures. But it still has a long way to go.

Unfortunately, the biggest obstacle to a cleaner river is us – the millions of humans who live along the river’s vast watershed. When it rains, everything on the ground – including road salt, fertilizers, leaked motor oil, and trash – flows directly into the river. When it rains heavily, these pollutants are joined by all of the raw sewage and chemicals in our backed-up sewers. Meanwhile, much of our built environment – our roads, roofs, and sidewalks – prevents a lot of clean rainwater from replenishing the watershed as nature intended.

The good news is that with some different choices, we can lessen our negative impact and help clean the Chicago River. Below are just a few ways to do that. 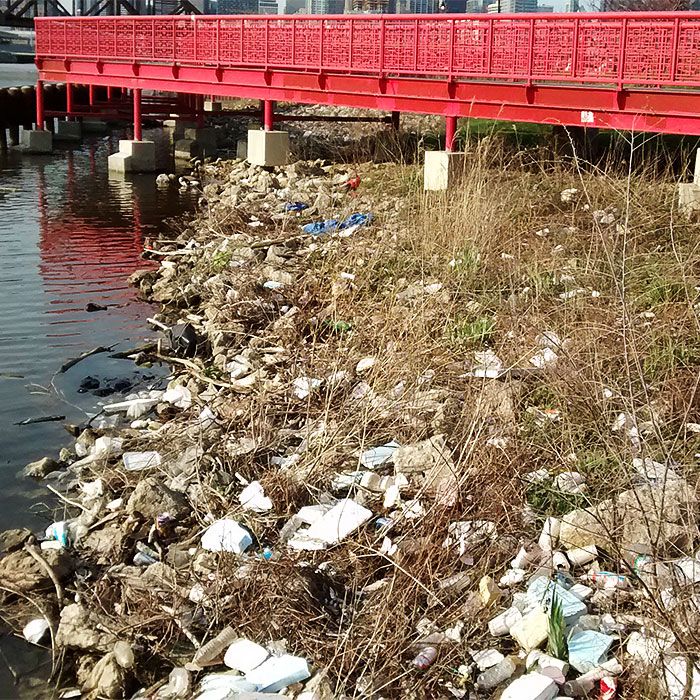 In Chicago, much of the litter thrown on the ground ends up in the river and along its banks. Courtesy of Shedd Aquarium

The Chicago area is teeming with asphalt, concrete, and other manmade structures. It takes only a drizzle for all of the grime and pollution that’s built up on our streets, sidewalks, and lawns to flow into storm drains.

In some neighborhoods, these drains empty directly into the river. In others, the dirty water enters the sewer system. From there, one of two things happens. On a good day, when there isn’t too much rainfall, the toxic stew travels to water treatment plants, where it is filtered, and, in some cases, disinfected, before being released into the river. During heavy rains, however, Chicago’s old sewer system can’t handle the load. The sewers back up, releasing untreated water directly into the river (and in severe cases, Lake Michigan and area basements).

With that in mind, here are a few things we all can do to make that runoff a little less harmful:

2
Help rainwater soak gently into the ground – and stay out of the sewer. 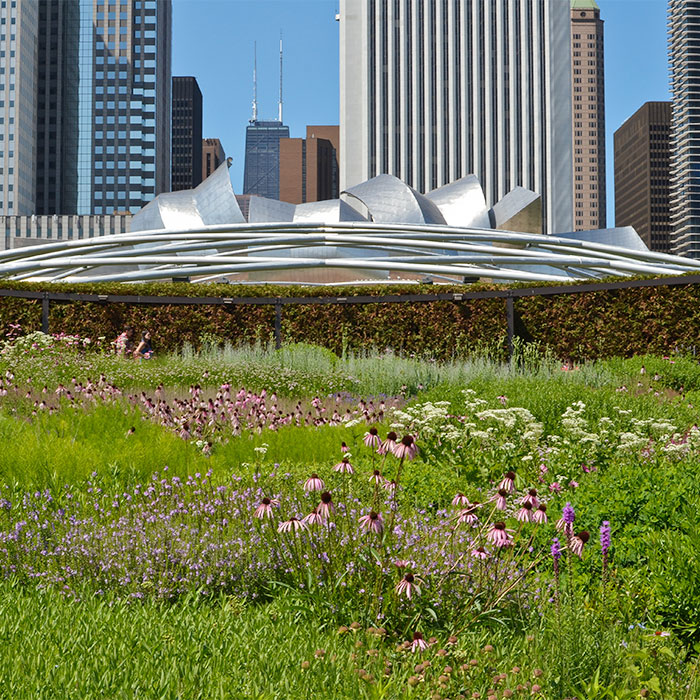 Lurie Garden at Millennium Park features many plants that are native to Illinois. Located above a parking garage and railroad tracks, it is also part of the world’s largest green roof. Courtesy of Center for Neighborhood Technology

Remember the water cycle we all drew pictures of in our third-grade science class? All of the impermeable surfaces (asphalt, concrete, etc.) in our urban environments act like little dams in that cycle, impeding water’s journey and stopping it from filtering down through the soil and replenishing the watershed. Instead, it either contributes to flooding or enters the sewer system, neither of which is good for the river. To help that rainwater realize its best and highest purpose: 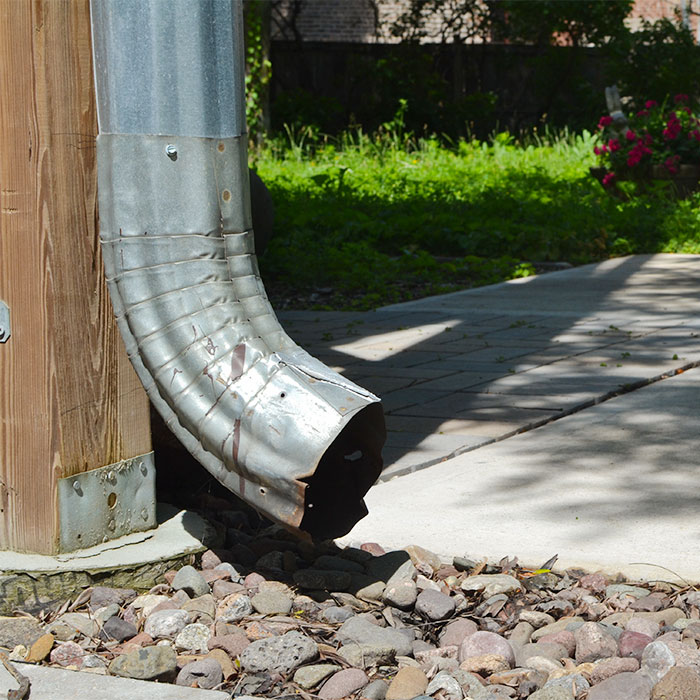 A gutter downspout at a Chicago home has been directed towards permeable rocks, several feet away from the nearby building’s foundation. Courtesy of Center for Neighborhood Technology

3
Watch what you put down the drain – both inside and outside your home. 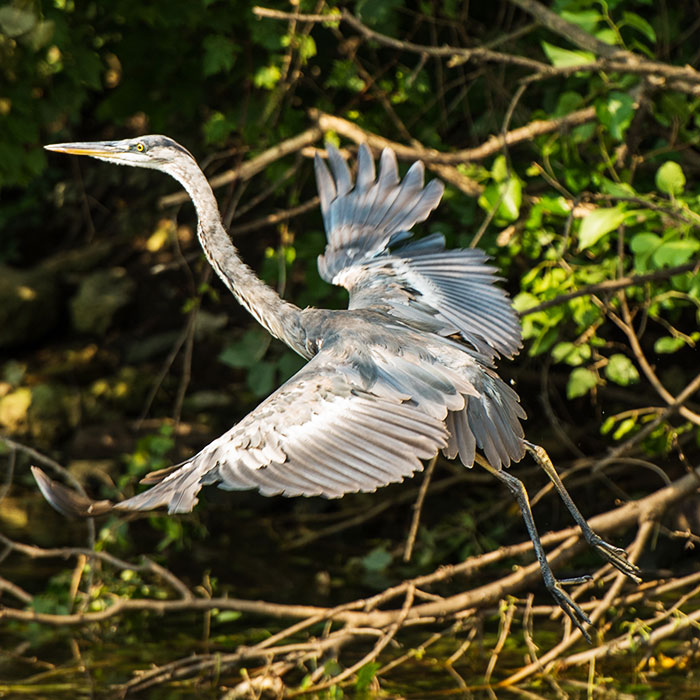 The Chicago River is home to an increasing diversity of wildlife, including green frogs, painted turtles, beavers, and more than 70 species of fish. But the pharmaceuticals, paint, household cleaners, and other chemicals we dump down our drains often don’t get filtered out during the water treatment process. “People tend to think that if they throw something down the drain that the wastewater treatment plants will handle it, and that’s not the case,” explains Allen LaPointe, vice president of environmental quality at Shedd Aquarium. “They just end up going through the process and back in the river.” With that in mind:

Reducing the amount of water flowing out of our homes and into our sewers is always important but even more so during a storm event. When local sewer systems overflow, they release untreated, raw sewage directly into the river and/or the lake, as well as streets and homes. 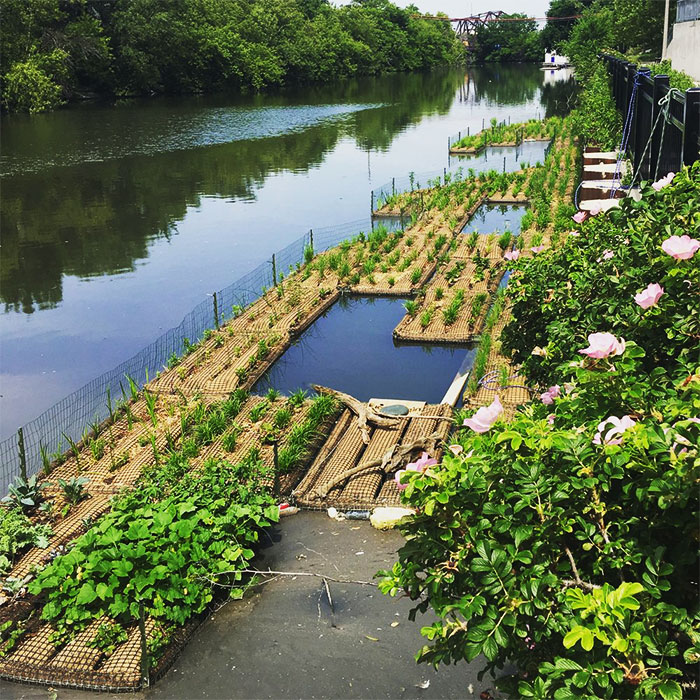 The local non-profit Urban Rivers enlists the help of “river rangers” to monitor plant health and wildlife and remove trash, weeds, or invasive species in their floating gardens. Courtesy of Urban Rivers

There is an unprecedented effort underway throughout the region to clean up our rivers and make them more welcoming for plants, wildlife, and people who want to canoe, kayak, hike, and fish – and maybe, someday, swim. If you’re interested in joining those efforts, here are just some of the organizations you can get involved with: 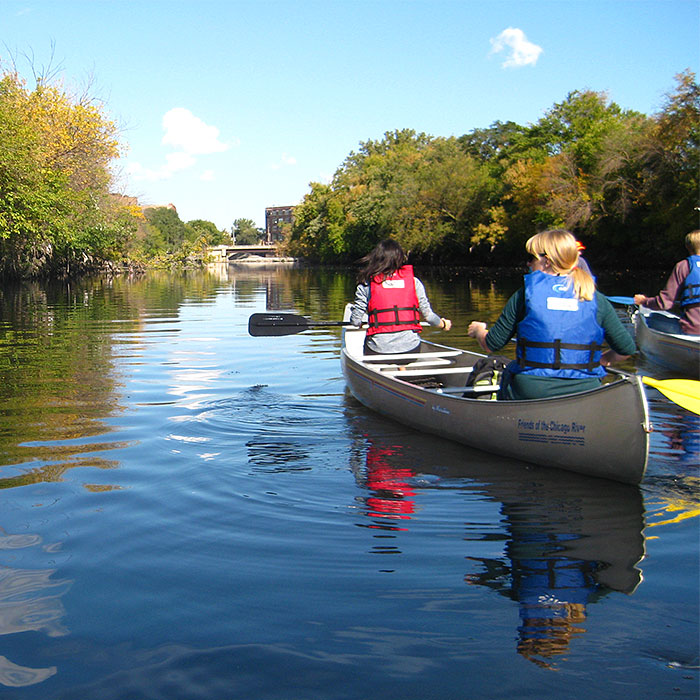 The Clean Water Act of 1972, the primary federal law governing water pollution, is written so that the more a waterway is used for recreation, the cleaner it is required to be.

As Stacy Meyers, staff attorney at regional conservation organization Openlands tells us, “If we want to help our rivers, just go and love them. Go and visit them. Go and paddle in them. Walk beside them, and that in and of itself is adding to the justification to protect them.”

Check out our guide to exploring the Chicago River for recreational opportunities near you. 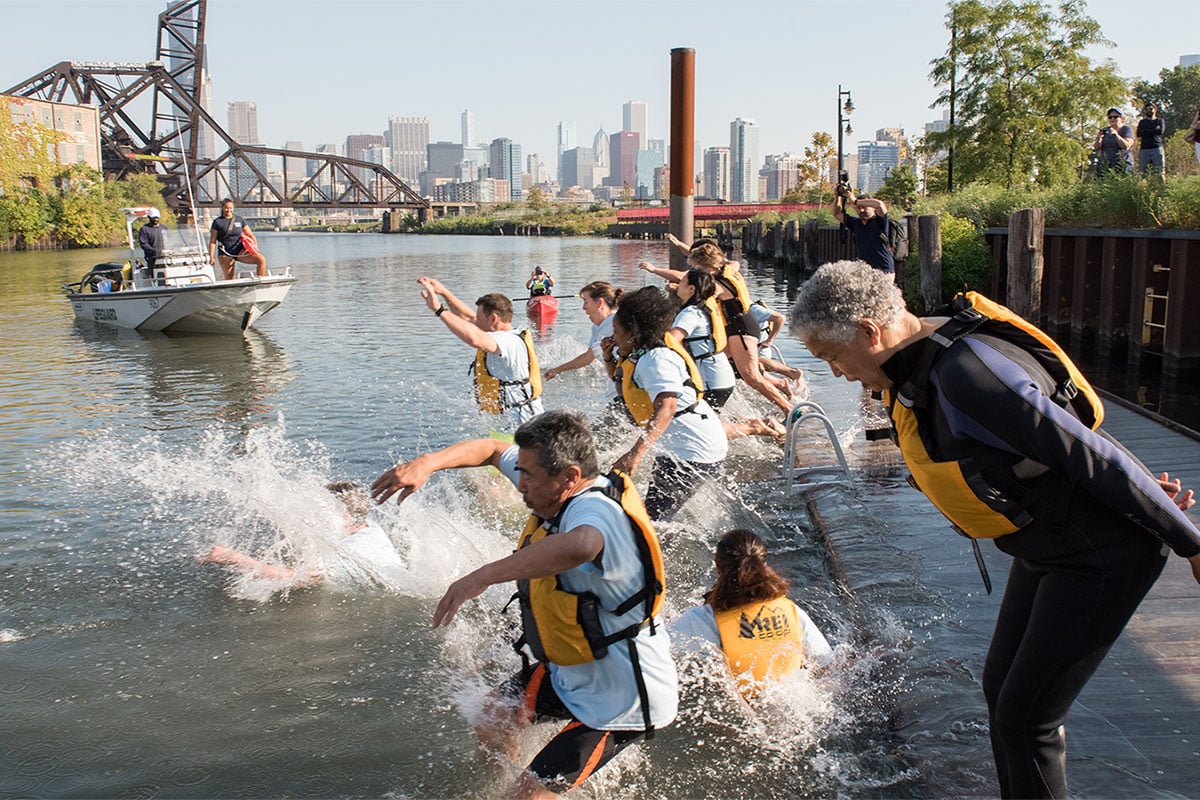 Feature: Can We Swim in the River Yet?

The Chicago River is now cleaner than it has been for more than a century, leading some residents to ask when they’ll be able to dive in. 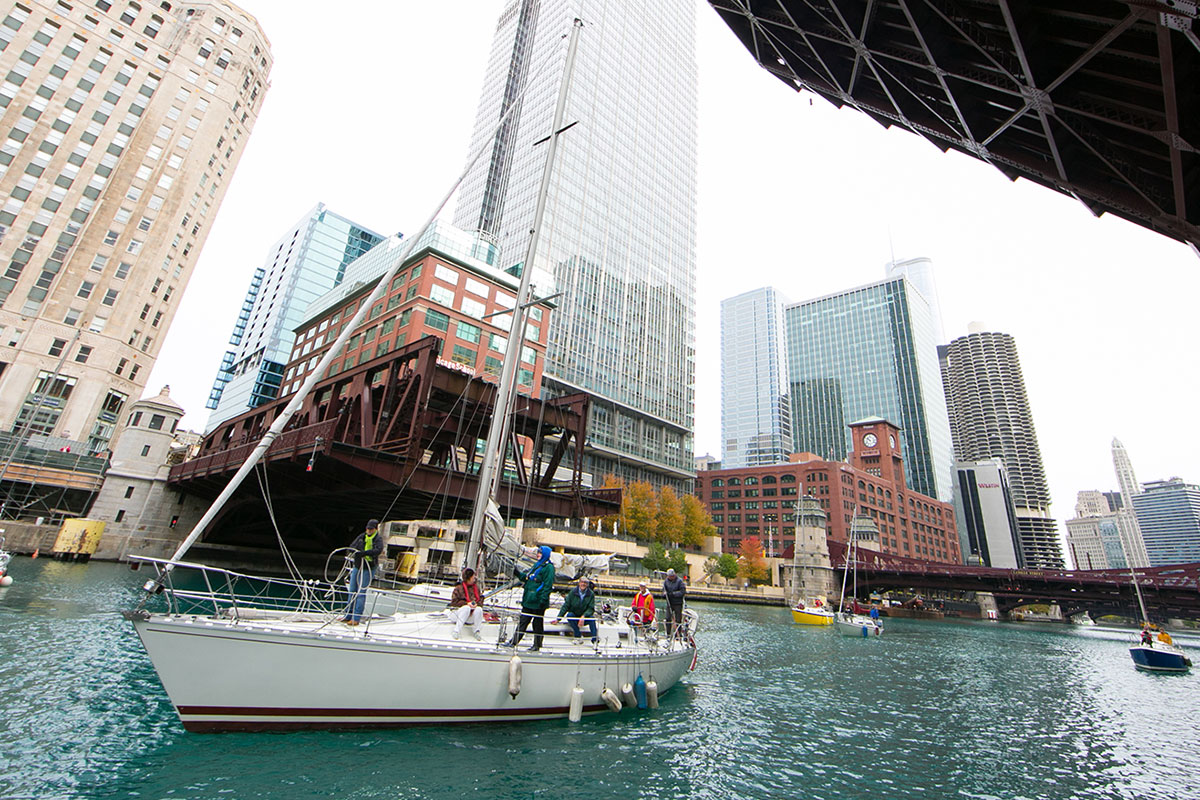 Feature: How To Explore The Chicago River: On Foot, By Boat, By Bike

There are myriad ways to explore the Chicago River and its shoreline — by boat, on foot, on a bike, or with a fishing rod in your hand.